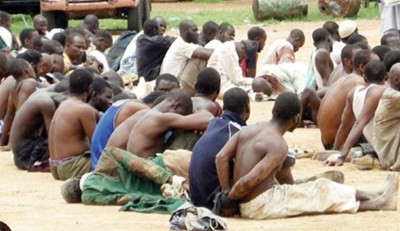 A riot broke out in Kuje Medium Security Prison yesterday.

Detained Boko Haram members and other Muslim suspects were protesting the refusal of prison authorities to allow them go out to observe Eid-el Fitr prayers.

A Boko Haram convict was alleged to have fainted during the fracas in the prison.

The aggrieved Boko Haram members and other Muslim suspects alleged that the three Lebanese suspects linked to Hezbollah in Lebanon were allowed to observe the Eid-el Fitr prayers, it was learnt.

But the prison authorities maintained that all Muslim detainees were disallowed from going for non-obligatory Sallah prayers.

A top prison official said the Prison Service does not have the capacity to give such a waiver to Boko Haram and Hezbollah suspects because it could lead to an ambush at any prayer ground.

According to sources, the riot broke out following agitation by detained Boko Haram and Muslim suspects that their fundamental right to freedom of worship was being denied.

It was learnt that the aggrieved inmates had relied on rumours that the three Lebanese being detained over Hezbollah arms cell were permitted to observe the Eid prayers.

A source, who spoke in confidence, said: “ The inmates, led by some Boko Haram detainees, insisted on their right to freedom of worship since they have not been convicted. They alleged that the law presumes them innocent until found guilty.

“But the prison management was hesitant. Later, rumours went round that the three Lebanese suspects allegedly linked to Hezbollah cell were given a waiver to observe the Eid prayers.

“The Boko Haram detainees and other Muslim inmates became embittered over what they considered as favoritism, leading to tension and riot.

“The riot started from the single cell before it spread to others. Those aggrieved broke cell windows, destroyed electricity cables and shattered water pipes.

“The prison officials did their best to curtail the situation. The inmates started pouring water on them. They ran away from the mob to prevent any violent clash.

“But they succeeded in quelling the riot and normalcy has been restored to the prison yard.”

Another source said the Boko Haram members and some Muslim suspects were angry because of alleged double standard of prison officials for the Lebanese suspects.

“The Lebanese suspects are being given preferential treatment to go to mosque, walk around, watch TV and play badminton among others.

“The Boko Haram detainees are saying that the double standard may affect the ongoing dialogue with the Federal Government,” the source said.

The Comptroller of Prison Mr. Yusuf Kazali arrived at the yard at about 1.14pm.

A prison official said: “There was no way we could have allowed the inmates to go to any Eid ground because we do not have the capacity to manage all the Muslim suspects , especially Boko Haram members who would have mobilised their colleagues to invade wherever we take them to.

“We have done our best to guarantee their freedom of worship because this leverage has been assisting in the reformatory process.

“We suspected that there was much to their persistent desire to go to a Eid ground.”

On preferential treatment for Lebanese suspects, the source said: “This is a blatant lie; we do not discriminate at all. We have been fair in treating everyone equally.

“I think some inmates are desperate to give, the dog a bad name. If you ask all those who have passed through Kuje Prison, you will know that we have been diligent and fair to all.

“We started having challenges in this prison since suspected terrorists of MEND, Boko Haram or Hezbollah and their financiers/accomplices are now being remanded in Kuje by the court.”

One of the counsel to the Lebanese suspects said: “ We have heard of the riot but it has nothing to do with our clients. All Muslim suspects protested. That was the brief given to us by prison authorities.

“They cannot talk of preferential treatment at all when the Lebanese were always taken to court in chains by prison authorities. Other suspects are not being dehumanised like that. All the businesses of the Lebanese have also been shut down.”