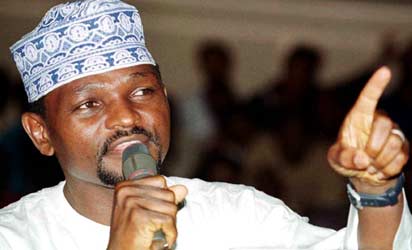 When Major Hamza al-Mustapha, former Chief Security Officer to late Head of State, General Sani Abacha was recently discharged and acquitted of change of murder of Alhaja Kudirat Abiola, wife of presumed winner of the June 12, 1993 presidential election, Bashorun M.K.O Abiola, by an Appeal Court in Lagos, it felt like somebody messing in ones mouth and putting salt as well, as the Yoruba would say.

The mess, one can’t swallow, the salt one cannot spit out, if you understand what that means. It was a sweet/bitter verdict that could be described as both victory and defeat for justice at the same time. To al-Mustapha and family, it was victory for justice while the Abiola family naturally felt otherwise. I guess most Nigerians felt the same way as the Abiolas but because the appellate court had spoken, are resigned to leaving everything in the hands of God, the ultimate judge.

But the Lagos state government (the prosecutor in this case) I guess, might not be inclined to handing over to God yet, as there is still one window of appeal to the Supreme Court left and might be willing to explore that, if only to be seen to have tried everything legally possible to get what the majority (at least in the South west) believes to be justice in this celebrated murder case.

I deliberately refused to join the bandwagon in condemning or praising al-Mustapha’s acquittal for obvious reasons even though I smelt rat in the whole thing. I could see politics at play here even though one could not point at any particular politician as being behind it. But with speculations in the air that al-Mustapha is about to pitch his tent with the Peoples Democratic Party (PDP), coupled with the reception he got when he visited the Government House in Kano shortly after his release, one needs no soothsayer to conclude that the former CSO had the support of the ruling party while his trial lasted.

It might not be out of place to also conclude that the powers that be in the north were sympathetic towards al-Mustapha’s cause as could be seen not only in the enthusiastic welcome he had received so far from his home region, but also in the shocking silence of that class on how to get justice for the Abiolas, after all somebody shot and killed Kudirat and the person was acting under somebody’s order. So, who did it and who gave the order? Until that person or those people are found and punished, al-Mustapha remains guilty in the minds of the people here, the show of shame by Dr Fredrick Faseun of the Oodua People’s Congress (OPC) hailing his acquittal notwithstanding.

In spite of the court’s verdict, if al-Mustapha and his co-accused as they were then, had a hand in Kudirat’s murder or any of the numerous unresolved murders of the Abacha era, definitely they will not go unpunished, both here and in the hereafter.

My concern here is not even about their punishment if they were indeed involved in the murder, but the red carpet being given to al-Mustapha in particular as if (the murder case apart) he was a honourable, just and competent officer while he held court as the unseen number two in the administration of the late maximum ruler. Don’t forget that al-Mustapha, a mere Major in the Nigerian Army was more powerful than most of his seniors, Major Generals et al including the official second in command in that regime, a three-star General, Lt. General Oladipo Diya. After Abacha, no other person was most feared than al-Mustapha.

Have we suddenly forgotten all those revelations made at the Oputa panel about the activities of the death squad of that regime that were answerable only to al-Mustapha? Has anybody been punished? If al-Mustapha had no hand in the killing of Kudirat what of the other crimes committed under his watch as CSO? Are we sweeping such under the carpet or has he been cleared? Until we are told that the man is free of all the baggage attached to him as Abacha’s CSO, it would be wrong to parade him as a kind of a hero or victim of vendetta as he wants us to believe. It would even be worse if any political party should roll out the red carpet for him and admit him into its fold.

It is unfortunate that the PDP already smells opportunities for electoral gains in the release of al-Mustapha, and the young man himself seems to wants to make political capital of it. Apart from visiting the Government House, Kano, controlled by the PDP, shortly after his release, he had been making some political comments and visitations as well.

He was at the Abuja home of the leader of the Niger Delta Peoples Volunteer Force (NDPVF), Alhaji Mujahideen Asari-Dokubo at the weekend where he was beating his chest as being the one whose actions shortly after Abacha’s death gave birth to this democracy. Can you imagine that, coming from an al-Mustapha? He wants us to praise him for not taking over power then, which he could have easily done according to him if he wanted to. What an insult? I think the young man is better advised to take it easy and lie low for some time and not reopen healing wounds. His choice of words and association tend to portray a man with an exaggerated view of his value. The Asari-Dokubo that he visited would either be in detention or a dead man under the Abacha administration that he served. We have not forgotten who killed Ken Saro Wiwa.

In any case politics they say is all about interest. So, an Asari-Dokubo can hobnob with an al-Mustapha? Wonders shall never cease. All for a Jonathan presidency again in 2015? So all those derogatory things Asari-Dokubo has been saying about the north, what E. K Clark, the Ijaw leader has been saying against the Hausa/Fulani no longer hold water as long as al-Mustapha can help win the northern votes for President Goodluck Jonathan in 2015? Nigeria we hail thee.

Since al-Mustapha’s release, different Ijaw groups and leaders have been failing over each other to outdo one another in hailing his acquittal, nothing wrong in that if only they are genuine and sincere, but we all know why; 2015. But al-Mustapha should remember the party story of the Biafran leader late Dim Chukwuemeka Odumegu Ojukwu, who because he was granted pardon by the NPN government of President Shehu Shagari in the second republic, quickly joined the on his return from exile and took Ndigbo to NPN, thinking that the interest of his people, who had followed Dr Nnamdi Azikwe to NPP that time would be better protected in the ruling party, he was wrong. The rest is history.

Nothing personal against al-Mustapha, but he should tread softly and realise that the murder of Alhaja Kudirat Abiola is still fresh and hurting in our memory, beating his chest all over the place or jumping into the political arena would do nothing to heal the wounds, he needs to show remorse and seek ALLAH’s forgiveness for the pains he inflicted on so many Nigerians as Abacha’s CSO. This is more honourable than joining the political fray. A word for President Jonathan and his group as well, Nigerians are no fools again; our mumu don do.