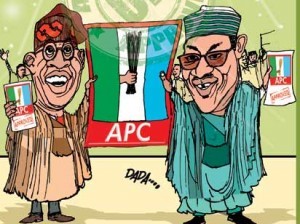 Nigerians are jolly captives, unwilling to extricate themselves from the stranglehold of political and military collaborators, who succeed in keeping them occupied on the periphery while feeding on the common purse. They pin their hopes on thugs, standing in proxy for their bickering paymasters, who clobber themselves in hallowed spaces and with sacred symbols. They line up behind men who do not wince at nepotism, but deploy their wives, daughters, and hangers-on into positions of power; they line up behind clay footed generals and unconscionable intellectuals who have the cravings of their belly and the cause of the people all mixed up; behind men and women who have the hopes of Nigeria’s 112million poor in their back pockets, imagining themselves on a march to change.

Few things capture our resignation and near powerlessness like the growing acceptance of the newly registered All Progressives Congress (APC). Make no mistake. I welcome the APC into Nigeria’s political space with tinged gladness, and I consider the argument for a strong alternative to the PDP and its purported benefits to our democracy to be within reason. However, a cursory examination of the characters that currently constitutes the APC, and will yet constitute it, exposes the hollowness our clamouring for change, and how much of a compromise we seem ready to make on the road to nowhere.

The whispers of young progressives infiltrating the APC, as some have done the PDP, and reforming it from within is naïve at best. Look to Mohammed Morsi’s Muslim Brotherhood and you can make a fairly accurate guess how that adventure would go.

A reformist faction made up of young mid-career professionals did emerge within the Brotherhood during the 1980s and 1990s. They argued for a pluralistic society, advocated an alternative view to the Brotherhood’s posture on Christian and women’s rights, and reached out to professionals, journalists and civil society activists.

But in the end, they failed to gain more than a seat or two in the Brotherhood’s executive council. For the old guard, who had the actual boots on the ground, these young Turks did not have the locus standi to challenge their authority. Some left the Brotherhood frustrated, others were expelled.  The plausibility of young reformers transforming parties controlled by elders set in their ways? Very unlikely.

So here we are. Caught between ‘evil’ and a lesser variation of it. Projecting our respective notions of change on recycled politicians pinning new logos on old habits. Effectively shut out of the negotiations and trade-offs, we cross fingers and hope the APC will throw up worthy candidates we can expend our energies on. What we have refused to do is confront our seeming inability to break away from the past and build a political organization from the ground up; what we have refused to do, permit the cliché, is take our destinies in our own hands.

As 2015 approaches, two roads diverge in the wood; we can decide to take the pragmatic path of embracing the APC, warts and all, working with it to unseat the PDP and subsequently charting a better course, or we can take the long view, pool our strengths, and trudge down the arduous path of building an alternative political force, one in better consonance with the hopes and aspirations of the Nigerian people and one with the capacity and integrity to progressively actualize it.

Either or, we cannot afford to neglect the importance of closing ranks, deploying every tool within our arsenal, including the organizational capabilities of social media, to build an army of people with a sense of shared destiny. We’ll need this alternative political force to have any influence on the weighty decisions of the APC, if we choose to line up with it, and we’ll need it to give bones to the possibility of a new political party, that can make the dash for 2019, if we choose to take the road less travelled.

Whichever direction we go, we’ll need a third force with boots on the ground; one that truly captures the yearnings of the people, a break from the past, an embodiment of the future. So there it is, 2015, two roads in the wood, no prize for telling the one we would take.

Efe Paul Azino is a poet and writer. He lives in Lagos with his wife and daughter.