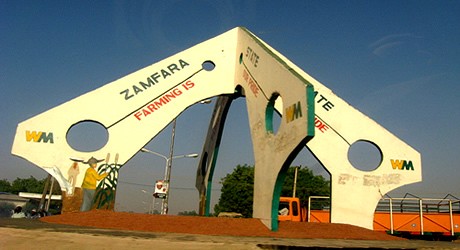 A  few weeks ago, the issue of arming the vigilante group in Zamfara State became a subject of high-wired politics at the hollow chambers of the National Assembly. It almost deteriorated into fisticuffs when two senators engaged each other over the debate. Since then, the issue has become a subject of intense debates all over the country, more especially in security parlance.

Now the arms have arrived in the country. This has opened a new page in the roiling controversy. Pronto: the federal government has seized a total number of 1,500 double-barrelled guns imported by the Zamfara State government for distribution to its vigilance group. Reports say Muhammed Dahiru Abubakar, the Inspector-General of Police, personally ordered the seizure of the arms said to have been imported from Ukraine based on the alleged contravention of firearms laws of the land.

This is certainly not a good time for Abdulaziz Yari, the Zamfara State governor. Yari is claiming that the state needs the lethal weapon so badly in order to curb the incessant armed robbery attacks in the state. The attack, he claims, has become too worrisome due to the terror, pains and death which the men of the underworld usually unleash on innocent citizens of the state whenever they struck. The governor was said to have felt betrayed by the police hierarchy, which was said to have earlier granted a silent approval to the state to import the arms.

The issue of arms importation came about when the state was facing serious challenge of armed robbery in 2012. Yari was said to have reached an agreement with the state police commissioner on the need to set up a vigilance group.  The meeting agreed that the vigilance group should be armed. The governor then decided to import double-barrelled guns which he hoped would be licenced by the police through a dealer in Kano.

It was learnt that the importation tactically bypassed the Presidency because of the belief that individuals could buy double-barrelled guns and apply for licence thereafter.  The state government must also have thought that the Inspector-General of Police would give approval for the arms because he is an indigene of the state and he is also aware of the security challenges facing the state.

When the news broke out, the Nigeria Police Force denied issuing gun permit to the Zamfara State government to be used by vigilance group in the state. In a statement, the police had insisted that it was an offence for a person to have in his possession or under his control any prohibited firearms without a licence granted by the President of the country or the IG. “While vigilance groups and other sincere community efforts towards safety and security are encouraged to work in partnership with local police authorities, the conduct and practice of such groups must be in total conformity with the law of the land.”

Making justification for the purchase of the arms, Ibrahim Birnin Magaji, Zamfara State Information Commissioner who spoke on the issue in a recent interview aired on the Hausa Service of BBC, said the number of policemen in the state were not enough to protect the lives and property of the citizens. The arms, according to him, would be distributed to members of the vigilante group living in the areas and who know every nook and cranny of the state. The idea, he said, “is to enhance the security in the state and help the security personnel in carrying out their duties by taking them round the state.”

Just as Zamfara arms were being confiscated, Peter Obi, the governor of Anambra State was distributing about 300 fully fitted security vehicles to 177 communities in the state. He also handed over N230.1 million to the communities to be shared among them at the rate of N1.3 million per community. This money is for the payment of salary of 10 members of each community’s vigilante group. Before this latest gesture, the state had, sometimes ago, put together a form of vigilante outfit which was then known as Bakassi boys, to bring sanity to the appalling security situation in the state.

Now, Zamfara is being made a scapegoat for deciding to take the bull by its horns, as far as security is concerned in the state. That sounds unfair. Perhaps, Yari, the governor of the troubled state needs to talk to his brother governors in the Niger Delta to find out the means by which they have been fighting oil pipeline vandals and other miscreants without raising eyebrows from any quarters. Any of the militant leaders can also give him a pep talk on how to import firearms without really stepping on toes.

Whichever way this issue is viewed, I personally think that Yari is just unlucky as many states have established and are still establishing vigilante groups to fight off hoodlums from their states. If we take the issue of the entire North, it may be apt to believe that the insurgency in the North-east, which necessitated the emergency rule slammed on Adamawa, Yobe and Borno states, may have a spiral or collateral effect on a contiguous state as Zamfara. Those who are terrorizing the indigenes of Zamfara could as well be some remnants or renegades of Boko Haram who are out to fill their pockets and stomachs. And we all know that this new generation of crooks have always beaten our lethargic security system to the game.

As for the Police and other security agencies operating in the state, it is true that they may lack enough manpower or even firepower to withstand the volcanic onslaught of the bandits. But adequate operational strategy could be employed to beat the hoodlums to their games. In the past, a number of security agents have been found either wanting or of complicity with criminals, the very criminals they are employed to track down. This, they do, for pecuniary gains in a rat-eat-rat society such as ours.

Recently, the military claimed that they were part of internal security arrangements in 28 out of the 36 states of the country, including the Federal Capital Territory, Abuja. This is alarming. What this means is that we have almost lost the whole country to hoodlums who have overrun everywhere. Had it not been for the presence of the military in strategic locations in some volatile areas of the country, probably the story could have been different by now.

But beyond throwing tight security cordons everywhere, we must urgently find a way to put able-bodied men and women back to work as well as put food on people’s tables. This way, I believe that once we find solution to poverty and hunger in the society, the likes of Yari will not need to import large quantity of arms and ammunition to protect the citizens. On the other hand, the security agencies, especially the Police, should rise up to the occasion in view of the tongue-lashing they get every day on the sickening security situation in the country. They need to demonstrate that they are equal to the task.

Security is one of the most important statutory requirements that a governor needs to accomplish in order to be able to govern the people. Be this as it may, one can clearly understand the predicament of the Zamfara governor at the moment. That is why we should not condemn Yari for the importation of the lethal weapons. Rather, we should blame a system that is not working, a system that has pauperized everybody, a system that cannot provide jobs for school leavers and food for the teeming hungry mouths all over the place. It is a pity. A great pity indeed!