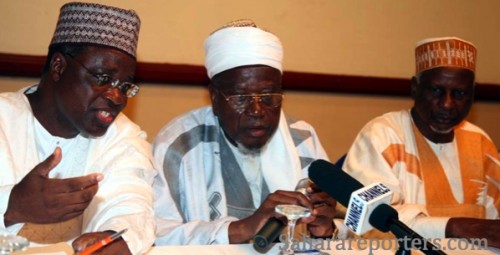 The Northern Elders’ Forum on Monday said that the North would not support President Goodluck Jonathan in the 2015 presidential election.

The spokesman for the group, Prof. Ango Abdullahi, stated this in an interview with one of our correspondents, while reacting to a statement by the Chairman of the Northern Governors’ Forum, Babangida Aliyu.

Aliyu, had in Minna on Sunday, said the North would negotiate with candidates contesting the 2015 presidential election.

He denied saying only a northerner should emerge as President in 2015.

Abdullahi said, “My part of the North will not support him (Jonathan). The South owe us a moral debt and they should pay.

“They seem to be forgetting the moral debt they owe us. There is nothing personal against the person of President Goodluck Jonathan. There is something wrong with the system that threw him up against equity and justice.”

The NEF spokesman said that people should have the courage to acknowledge equity and justice.

“When I say we will not support him, it is not because he is Jonathan or that he is Ijaw. What we are saying is that we will look at the issues at stake and throw our weight where there will be equity.”

Abdullahi said that the North had not been treated fairly.

According to him, the NEF has no political party or presidential candidate for now.

The NEF spokesman added that there were no contradictions in the comments made by Aliyu and his Jigawa State counterpart, Sule Lamido.

Lamido had in Dutse, the Jigawa State capital, said that the Peoples Democratic Party presidential ticket was not a guarantee that Jonathan would win the 2015 poll.

Abdullahi said, “There is no contradiction in the position of the North. If you read what  Babangida Aliyu said correctly, he said the North will negotiate the Presidency in 2015.

“It does not foreclose the emergence of a northern candidate. I don’t know in what context (Sule) Lamido spoke but I know he knows what he is talking about.

“It is a fact that even when a candidate emerges on the platform of a party there is no guarantee that he will win the election in a free and fair contest.”

He recalled that the North supported zoning in 1999. This, he said, was to enable all parts of the country to have a sense of belonging.

Abdullahi said, “It was the Northern Elders Forum that supported the election of the President from the Southern part of the country, first for four years and secondly for another four years.

“We are not talking as if other parts of the country have no rights. We ceded our rights and supported their aspirations, and therefore, what we are saying is that for equity, fairness and balance, it is about time that there is a payback based on the kind of system so that people will not misunderstand us.”

The Presidency on Monday said Jonathan was ready to negotiate with the North and other zones in the country if he decided to contest the 2015 presidential election.

Special Adviser to the President on Political Matters, Dr. Ahmed Gulak, said this in an interview with one of our correspondents.

Gulak spoke in reaction to Aliyu’s comment on Sunday.

The presidential aide said that as far as Jonathan was concerned, politics was about extension of olive branches to all stakeholders and building bridges.

He said the President was favourably disposed to negotiating with any bloc or zone in order to move the nation forward.

“President Jonathan is ready and always willing to negotiate with any bloc or zone in order to move the nation forward.

“Politics is about discussing with stakeholders, all zones, all blocs and all states. He will do this should he decide to contest in 2015.”

Meanwhile, the ACF on Monday said the north was not insisting on a northern president in 2015.

The National Publicity Secretary of the ACF, Mr. Anthony Sani, who said this in an interview with one of our correspondents in Kaduna, said the North, like other regions, would contest the presidency in 2015.

Sani said that there was nothing wrong with the statement credited to Aliyu that the region was ready to negotiate the 2015 poll.

The ACF spokesman said that the zoning formula had been killed and buried by the 2011 elections.

“Where that is the case, the North will be expected to canvass for the presidency like any other sections of the country. In that case, there is nothing like North insisting on the presidency, but it will be left for dynamics of democracy to determine.”

The ACF’s spokesman said the South used annulment of June 12, 1993 election to morally blackmail the North into accepting zoning.

He stated, “When the time came for the turn of the North, then suddenly constitutionalism and politics of merit supplanted zoning. What is more? Nigerians voted against politics of zoning in 2011.

“As democrats, ACF and northern leaders accepted the judgment of Nigerians in accordance with democratic tenets which demand that majority has its say and way while minority only has its say.

“In proper democracy premised on triple foundation of liberty, justice and common decency, there cannot be insistence.”

Sani blamed the media for reporting that the North wanted power returned to it as a birth right.