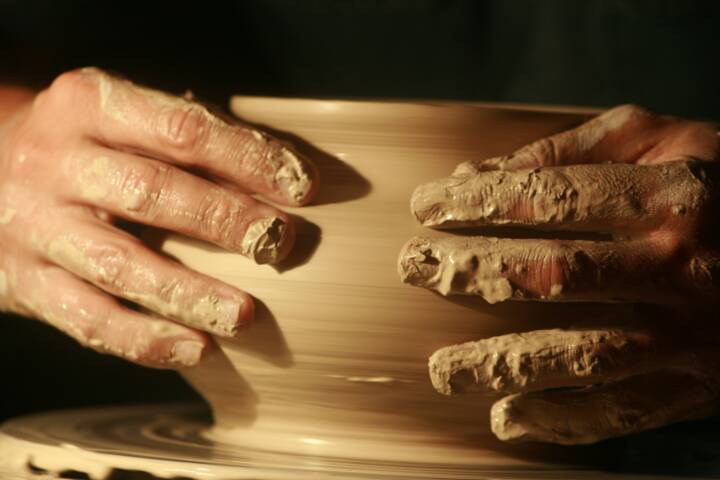 August 12th, 2013 will be 29 years after the passing unto glory of Hajiya Ladi Kwali. A woman of great artistic acumen and unprecedented creativity in the modern history of pottery in Nigeria who left behind the legacy of blended craft of traditional African and Western pottery, which is celebrated within and without the shores of Nigeria as one of the finest and obviously famous works of art ever to have come from sub-Saharan Africa.

For centuries, pottery has been the exclusive preserve of the womenfolk in Nigerian traditional societies and cultures. Pottery was and is still used for various purposes such as cooking, decoration and more commonly for water storage. Some cultures also use artistically decorated pots as religious symbols, hence the intricate design patterns and ornamentation that is has come to be associated with such items.

Hajiya (Dr.) Hadiza Ladi Kwali was born in 1925 in a village in Kwali area populated by the Gwari (Gbagyi) people of Northern Nigeria. She grew up in a family in which the womenfolk made pots for a living, and worked with her aunt as an apprentice in pottery. By the time of her death, Dr Ladi Kwali was Nigeria’s best known potter. She left a rich legacy of her work and a sizeable number of apprentices who picked up from where she left at the Abuja Pottery Training Centre.

With the amazing way in which she handles clay, she produces pots with spectacular beauty in form and decoration. The splendor of her pottery attracted the Emir of Abuja who acquired and kept in his palace, a collection of her works. In 1950, these collections were seen and admired by an English potter, Michael Cardew who was sent to the Abuja area – apparently on a mission to improve the quality of local work there – by the then colonial government. He established the Abuja Pottery Training Centre in that year and stayed there for the next 15 years, working with local potters, as he taught and was taught the art of pottery in a symbiotic learning relationship – he introduced wheels and kilns to the Centre, and he learn about traditional firing methods and ornamentation from the local potters.

Dr. Kwali’s contact with Michael Cardew in 1954 was the turning point in her pottery career. Cardew introduced her to his Abuja Pottery Training Centre  – which was exclusive to women potters  – where she learned to throw pots on the wheel. Dr. Kwali was initially reluctant to adapt to the wheel, preferring the traditional spiraled coil method of building pots. But she later discovered her natural flair for the wheel; she learns and moved on. She became an authority in pottery, combining the Western and traditional methods of making pots to produce dishes, bowls and beakers with graffito decoration. Most of these were glazed and fired in a high-temperature kiln and therefore denote an interesting hybrid representing a fascinating mixture of both traditional African and Western studio pottery. On his part, Cardew learn about the traditional firing methods and ornamentation from Kwali who was glad to teach her teacher.

Over the span of a decade, the mixture of improved firing methods, wheel and kiln technology, and Dr. Kwali’s sophistication in ornamentation skills; her works became known in Europe, Britain and America. They were displayed on exhibitions in Europe in 1958, ‘59 and 1962 to great acclaim in London at the Berkeley Galleries. In 1960, her works in pottery were displayed at The Nigerian Independence Day. She was awarded OON (Officer of the Order of the Niger), and an Honorary Doctorate degree by Ahmadu Bello University, Zaria. In 1963, she was decorated with the honor of OBE (Officer of the order of the British Empire) by the British Government in recognition of her being a worthy and renowned representative of Africa’s rich heritage in pottery.

Today, some of her pots decorated with incised geometric and schematic figurative patterns are used for cooking and water storage. While some traditionalists use her pot as religious symbols.

Dr. Ladi Kwali remained associated with the Abuja pottery works until her death. And despite her lack of formal Western education and inability to communicate in English language, Dr. Kwali was able to give lectures (through interpreters) and make physical demonstrations – at home and in many European and American institutes as guest lecturer – on how she improved her traditional pot making skills to a world-class standard. The Abuja Pottery was renamed the Ladi Kwali Pottery and her name is immortalized on a major street in Abuja; while a conference hall in the Abuja Sheraton hotel was named in her honor.

Someone describe her as “a replica who epitomized what womanhood is all about”. She was creative, innovative, resourceful, and hard working. Her dedication and commitment were the keys she used to unlock her life of distinction. She was the local scarf who never allowed her lack of formal Western education constrict her from attaining greatness in life.

Shortly after Cardew’s death in 1983, Dr. Kwali died in Minna on 12th August, 1984 at the age of 59. She was married but had no child as at the time of her death. Many of her students of pottery took over and continued the art of pottery at the Abuja Pottery Training Center after her demise.

She remains the only Nigerian woman whose picture is printed on the Naira note – a photo showing Dr. Ladi Kwali seated as she engaged in the delicate craft of pottery is displayed at the back N20 note. Although this recognition of Dr. Kwali’s great works of arts and pottery by the Nigerian government is commendable, more have to be done in view of her celebrated invaluable contributions to the world of ceramics arts, ingenuity and the symbolic inspiration she gave to the womenfolk to pursue hard work, creativity, self-reliance and economic independence. In view of this therefore, the picture of this great lady should be moved to the front of the Naira currency – from the current back position – as is the case with the photos of the Nigeria’s founding fathers. In fact, the picture of Dr. Hadiza Ladi Kwali should either be placed by the side of Alhaji Mai Bornu and Dr Clement Isong images or take over the space that is currently occupied by the pictures of the two gentlemen on N1,000 note.

Furthermore, a day should be set aside in the national arts and culture calendar which is to be dedicated for the celebration of Dr Ladi Kwali’s works of arts, her pottery craft as well as the Black African heritage in ceramics arts; where exhibitions will be made and papers will be presented by professionals.

What a great woman! The ambassador of Black African arts; a creative potter of international repute, a role model and source of inspiration for the womenfolk! The world of art and the craft of pottery will continue to draw reference from the great works of Dr. Ladi Kwali, and generations after generations of potters will be inspired by her sheer creativity, dedication and hard work which were the hallmark of her greatness.

May God have mercy on her soul and grant her eternal rest.