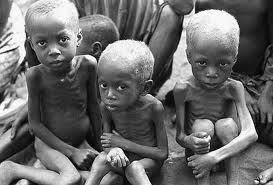 We all speak of poverty. We speak of it perhaps too often, and with such self-certainty about its meaning and causes that no one stops to ask whether we have the right perspective on the matter. What, after all is the true meaning and nature of poverty? Should we, perhaps dwell on the ‘arrogant poverty’ of the materially comfortably, and the usual complaints about having to cut daily papers from eight to four? Or is it the talk, over expensive drinks, about the hard times and about how the little saloon car outside that one of them uses only when he goes visiting in the evening cost nearly N5 million?  It goes so far in some cases, that they end up declaring that the general world economy, not just that of Nigeria, is killing them. Now, don’t tell me that this is not a ‘brand’ of poverty.

While in an air-conditioned room powered by a massive electricity generating set, they lament the miserable performance of the electricity authorities and wonder how soon they, the masses, would stop suffering. This is all very good, because the only reason they can get away with calling themselves the masses is that the real masses are not within earshot. While they are at it, moaning about lack of regular electricity supply, you may even hear mention of the frightful airfares for the coming summer and how they cannot remember the last time they last flew Business Class of less than N1 million.

This is all very terrible, of course, this dreadful poverty that makes all of us to now pay so much for everything. Ordinary apple, not banana that we have, costs so much. So does a packet of imported grapes, which has healthier substitutes here. So also does the meat in the cold stores, where you sit down comfortably while the meat is weighed and a price attach, before you go to the pay point to be received by very polite shop attendants.

But let us leave that and come to the ‘poverty’ of the materially wretched, the indolent and the delusional. These ones expect paradise on earth and speak nebulously about happiness and the ‘joys of life’. It surely does not occur to them that they may lack the ability to be happy. That sounds absurd, does it not? We believe we all know what happiness is. We also believe we know how to find it. You can see many people getting ready and heading out for a picnic, in order to be happy. They scream at each other, spend long and tiring hours on chores related to this pursuit of happiness and general work up their blood pressure, their stomach ulcers and much else. Finally, they arrive the point from where they are resolved to yank happiness from its hiding place and make it our own. Lo and behold, they are tired. Some dose off, etc. In the end they pack and go, after ‘going to be happy.’

Yes, a lot of people want to be happy. Images of Americans and Europeans in skimpy clothing often represent the very pinnacle of experience for the aspirants to this brand of happiness. Plain delusions and nothing more! Remember what Socrates said to his friend, Thrasymachus, who believed that happiness lies in fulfilling all one’s desires and having the means and resources to even take advantage of others? Socrates simply asked him: “Is a man necessarily happy because he has fierce appetites and the means of satisfying them? By not asking the question: “How ought a man to live?” Thrasymachus was already in trouble for the rest of his life, the way someone who does not ask, “What should I use to fuel a car designed to run on diesel? And who runs the car on coconut oil without knowing the damage he is doing to the health and longevity of the engine.

We all want things to work here, don’t we? We all want a better society where people obey the rules and respect the norms for sound morality and socialisation. But, are we not actually the problem? Do we not, as traders, sell substandard goods to people who do not keep a sharp lookout? Do we not, as ‘law abiding citizens’ mock the government official who does not enrich himself via controversial means. Anon, do we not also make financial demands of public office holders, which can only be met by those of them who take liberties with the common till?

Yet we all want transparency, no! We all hate corruption with a vaulting passion, don’t we? And don’t you dare say anything about the fact that we take incredible liberties with the funds of our social clubs, town unions, or students unions. Just know that we are so thoroughly outraged by the corrupt practices walking the land and we never hesitate to say so at any given opportunity. It does not matter that we may have just pulled off a grand scam in the name of public good the day before our fine public outburst. But let’s talk about real poverty.

Speaking in the strict and proper sense, poverty is really a condition of the soul. In case someone will cry ‘foul’, or at least try to assure us that he has never seen a soul walking down the street, playing golf or taking part in a board meeting. So let us substitute another word for ‘soul’, let us say that human poverty is first the absence of something essential to human nature for it to be true to itself. It is only at a secondary level that it refers to the subsistence of the anomaly, as if it were part of normal life. Go on, someone, and tell me that this is just grammar!

The true poverty of the soul, which is caused by addiction to wrong values, makes the human being to treat whatever enables him to achieve what he wants as ‘right’. This is the origin and fundament of “corruption”, or distortion of values. Thus, like poverty, corruption is not what we are fighting at the moment all over the world. One of the most corrupt nations in the world today, in the real sense of that much-misused word, is America. What it exports to the rest of the world, and which it uses to create jobs for various aspect of its imperialism is the last and most tangential aspect of corruption’s manifestation. That is what the world is mistaking for the real thing, while the primary distortion of values that leads to distortion of the right standards for human conduct and a just society are being treaded underfoot. It is the latter violation that further scrambles all rationality and clarity, making ignorant consensus and bold presumption the criteria for truth.

Distortion of values and disorientation work together to nurture every form of corruption, leading to the decay and sundry ills we see today. It is the second type of poverty that breeds the former.

This brings us to an initiative that was mooted at the residence of Ikechukwu Neliaku barely two years ago. It had to do with the fortunes of the youths and people of Anambra State. Two primary promoters of the initiative wanted to make impact, rather than seek visibility in the public domain. They began with letters and consultative meetings with prominent Anambra people in Abuja, Lagos and other major cities. Then it shifted to Anambra, and meetings with traditional rulers, market leaders and civil society organisations in the state took close to four months to conclude. Then there was a trip to London for the same purpose. Then began a series of youth programmes, capacity building initiatives, leadership training and elaborate political education programmes. Then came the Anambra Peoples REBIRTH Summit, to which all town unions, traders associations and civil society organisations sent duly accredited delegates. Then came the state-wide campaign for free and fair elections, capped by a march led by Chief Chukwuemeka Ezeife. Then came the Anambra Grand debate, which was aired live in Nigeria, Britain and Canada and which was moderated by Okey Ikechukwu, Labaran Maku and Reuben Abati. Then came the Anambra State Youth Reorientation and Empowerment Programme, through which 5,000 youths were initially selected for a programme that has a strong value component.

That programme was finally concluded last Friday, with the formal presentation of the signed cheques to some beneficiaries by the state governor Peter Obi and the display of all the signed cheques, which the others will collect between now and next week. One of the initial beneficiaries of the programme from Nnewi used just seven months to grow his photography and video recording business to the value of N2.1 million. He also has four staff members. He was given N100,000. It is the same with Henry Ezeakunne, who, though an undergraduate at the time, took advantage of the ASUU calendar and trained in fish farming. He is now running a successful business, has finished his youth service and used the recognition about the place of values in human life and institutions to write a book officially endorsed by the authorities of the University of Nigeria, Nsukka. The book is an expose on the motto of the university: “To Restore the dignity of Man”

The story of Okey Nwuche is even more telling. He now has a thriving business, trains paying students and runs an entrepreneurship academy set up to bridge the knowledge gap of many new business owners who merely acquired vocational skills. Thanks to ANSYREP, he is the most successful YOU-Win story from Anambra State today and the only person from the sent for studies under the programme. We are able to tell this story and not talk about the aborted opportunities of thousands of young men and women because the governor provided them the needed financial enablement. As for poverty, a lasting solution to it must begin at the level of values.it is from here that a political economy of predation emerges.