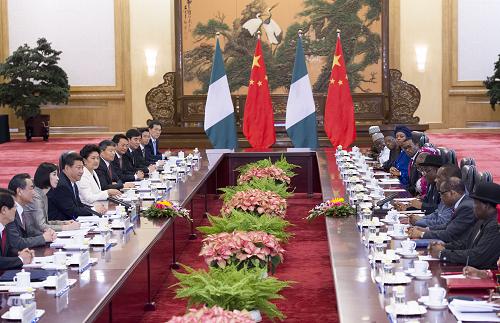 We  face neither East nor West, we face forward

The former President of Ghana, Dr. Kwame Nkrumah, was a wise man. But no one is sure whether the man popularly referred to as Osagyefo, which means the redeemer, by his devotees really saw the future when he made the above statement. Today, the reality of Chinese “invasion” of Africa is here with us. There are many who will disagree with the point that China has invaded Africa just like the Western countries did during the colonial era. There are those who will see this view as contentious and who see China as the “do gooders” who have come to help Africa out of poverty. Really? Is Africa poor? The debate about China’s return in Africa is raging both among academics, politicians and the civil society. Views are often fragmented amidst a belligerent conversation. Yet, there is a need to have a nuanced view to ascertain what it is all about. When one sees the divergence in terms of infrastructure between Africa and our “traditional” friends, then one seems to succumb to the argument that Africa’s relationship with her former colonisers is largely a master-servant one. References to the inherited and exploitative state apparatus from the colonial era is a valid direction to argue in any candid conversation about patronage politics and underdevelopment in Africa. Yet, it is simply unfair to blame all the woes of Africa on the colonial masters more than five decades after they retreated.

President Goodluck Jonathan recently led a multi-sectoral delegation to the Asian country ostensibly to boost China-Nigeria economic and political bilateral cooperation. It is believed that the President secured low interest loans worth about $1.1bn for infrastructural development. That is very commendable. Nigeria is currently the largest trading partner of China with a trade volume of about $10.57bn and an estimated non-financial investment of $8.7bn. The rapid growth of China’s GDP per capita from $1,135 to $6,100 with the attendant enhancement of Chinese 1.3 billion population – one fifth of mankind, offers a lot of interesting lessons to Nigeria. Chinese appetite for oil means that they may be buying up to 200,000 barrels of oil per day in 2015. However, there are few myths about China in Africa that one ought to discuss and possibly debunk.

First of all, I dismiss as cheap diplomacy the talk that China or any country for that matter is or has been in Africa for the single motive of helping the continent to develop. No. That is superlative falsehood or at best hocus-pocus. Those countries that are in Africa are here because of what they stand to gain. Period! Cheap diplomacy about tradition ties or the demonisation of colonialism does not hold water. The reality is that China is in Africa like the West to satisfy the dire need for energy resources to power their own economic growth. Anyone who is not prepared to stomach this inescapable reality should get ready for a hollow diplomacy. Diplomacy is about self-interest and no country is in the business of helping another without expecting anything in return.

I recommend an afrocentric audit of the activities of China in Africa. It is time to integrate both the criticisms and compliments of China in Africa with a view to distilling a coherent engagement strategy that will advance the interest of the continent. The sad part, however, is that there is still a gap in the articulation of a structured African engagement with China. It is either that a clear African agenda is missing or it is articulated from outside Africa. How can any external entity now claim to love Africa so much that it will usurp the space of how a continent will engage its partners? Why have continental organisations in Africa chosen to take a back seat to be a receiver of diplomatic orthodoxy and all forms of external narratives? The prevalent orthodoxy and assumption about the convergence of interests and values between the Chinese and Africans should be discarded forthwith.

Africa, instead, should respond to China armed with its own interest and demands. This is called the strategy of reciprocal engagement. Many countries still see China as an emerging power it used to be rather than a global power that it has lately become. Acknowledging China as a key global stakeholder and sequencing the perspectives of the historic rise that is transforming the historic rise of a fifth of mankind is imperative for a reality based Africa foreign policy. For instance, Africa must get China to align its economic and political practices across the continent with international best  practices.

It is no news that some of the goods pouring in from China are sub-standard. Can someone tell the Chinese companies that our willingness to trade must not be taken to mean that we want to become a dumping ground? The influx of Chinese workers into Nigeria is discouraging the employment of our own local population. Part of the leverage that should be provided by Chinese companies working in Nigeria is the provision of jobs. Many of our young people are currently unemployed and that could constitute a demographic time-bomb for the future. The trickledown effect of whatever thing the Chinese are doing in Nigeria will be lost if they do not create jobs. Some of the few Nigerians who work in Chinese companies still complain about unfair treatment in terms of compliance with labour laws and environmental standards.

Another aspect of demand of many Africans on China is in the area of transparency and accountability. A relationship of mutual respect must permit the free flow of information on both sides. This is not currently happening between China and Africa. Some sections of the civil society recommend that China should join the Extractive Industries Transparency Initiative to ensure that Chinese companies in the extractive sector publish all they pay to their host countries in Africa. African countries must scrutinise all the deals they get into in line with global best practices.

In all, Nigeria nay Africa must not ignore China. That country currently contributes about 20 per cent of the world’s economy. We must also not turn our back to our traditional partners but should not allow anyone to dictate to us. Africa’s oil remains an important component of the world’s hydrocarbon demand and supply balance and so our continent must be in a hurry to use her natural resource endowment to draw substantial global capital to trigger a futuristic economy that will be less dependent on natural resource.  Afrocentric enlightened self-interest must guide our conversation henceforth. That is the only way Africa can come of age in the eyes of the world. Africans are the ones that will get Africa out of the poverty loop to sustainable development and self-reliance. Not any one else.