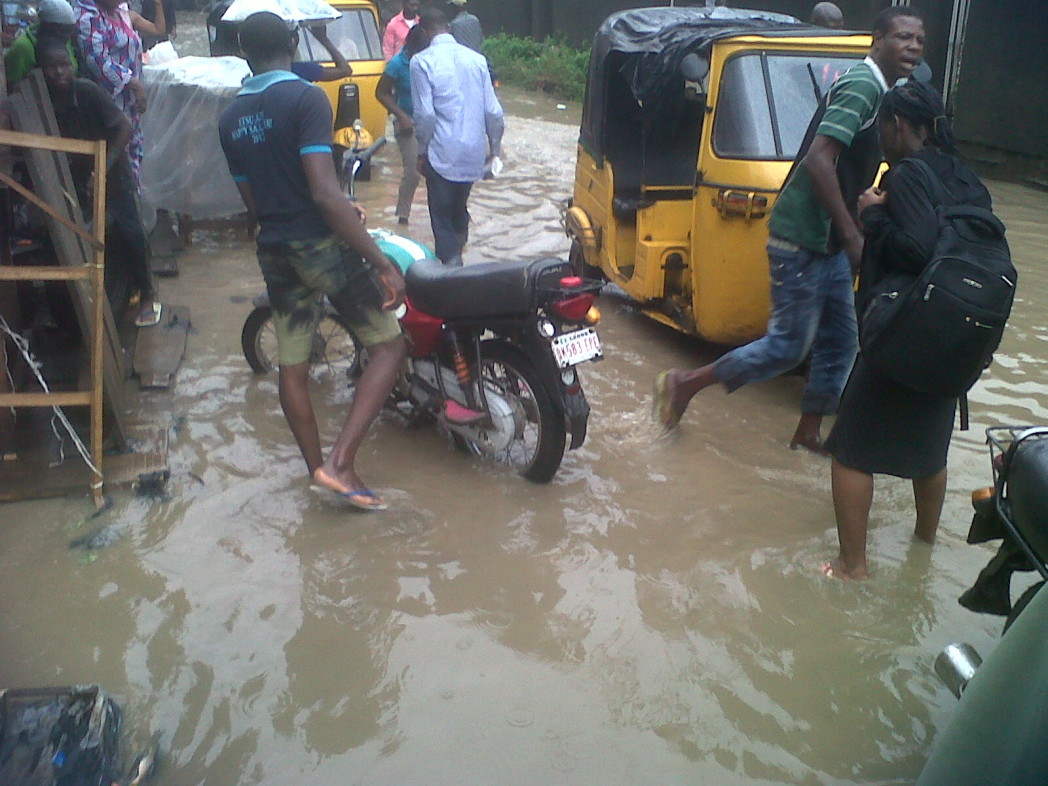 On the 8th of July, 2013. There were showers as usual or as expected to be in Lagos and environs. Though maybe too early because it started at my area,  Ilasamaja around 8am and it didn’t stop till afternoon. I wouldn’t say I’d sit at home, I had some places to touch, starting with GTbank at Lagos University Teaching Hospital (LUTH), then University Of Lagos (UNILAG) to submit my Masters Form, later to Redeem Christian Church of God (RCCG) national headquarter at Ebute-Metta and finally to Lagos State University (LASU)  to collect my long due certificate and also get some personal things done.

I left home in the rain but it was more like a drizzle so I wasn’t really wet. It was the normal light showers though it had rained cats and dogs before I left.

On getting to Idiaraba where LUTH was located, it was an eyesore, the water on the new road reminded me of the flood in Thailand. It was terrible when I noticed a schoolboy of about 7years of age who struggled in the water with his little brother and also the basket of food. But like a true blood brother, he won the tussle but had to sacrifice their food for that. As if that was not enough, when I got to LUTH gate on the bike, it was practically flooded, I had to plead with a commercial bike rider to take me across the “river”. There were lots of Lagosians doing the rituals “shoes in the hand, trousers rolled up, skirts/ wrappers pulled up and walking in water bare footed”. I was done with the transaction at GTbank under 10mins, very strange but true, thanks to the rain I guess, it kept people away from banking that time.

My journey to UNILAG was smooth; not too much flood so it was ok. I was done with the submission and purchase of past question in no time, I headed to Oyingbo to get a bike to RCCG at Ebute-metta and the rain increased the tempo. This time around, I was beaten blue black and it subsided a bit. I moved, Oyingbo was a terrible sight, from the UBA bank to Total filling station down the road along Freeman street, the road was filled with black waters. I sailed in it anyways before I could get a bike to the church. Coming back from the church was another great task because the rain poured heavily. The huge drainage system on that street couldn’t hold the water, it overflowed and the street was just like the last tsunami in Chicago but this was black.

I couldn’t proceed on my journey to LASU because I was like a shower running. I was terribly soaked and my skin was gradually turning white.

I got to Oyingbo and the story was still the same, got another bus to Yaba and that was when I saw another shocker, Adekunle Fajuyi/Herbert Macauly road was totally covered in dirty water. Drivers were so careful as they sailed through the man made river.

The war of umbrellas was seen when I got to Yaba, waters everywhere on the road and there was a tiny place that was dry like the path on the Red Sea, all passersby were with their umbrellas. It was raining and no one move for anyone so the umbrellas had to struggle with themselves. Very funny to behold, the bent and small umbrellas had issues with big and better ones. It was this sight that led to this piece as I journeyed back to my home in a bus from Yaba to Idi-araba. On getting to Idi-araba, the water was terrific, everyone was doing the “rituals” except he or she was on bike or in a car.

2 Lagosians should desist from dumping refuse on water ways and drainages.

3 Government should always make sure that there’s drainage on all new and existing roads.

You can follow the writer at @Pmonkz , he’s an aspiring Geo-tourist and environmental consultant, a think tank, lover of good music and CEO of Pmonkz INC. 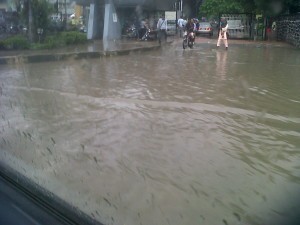 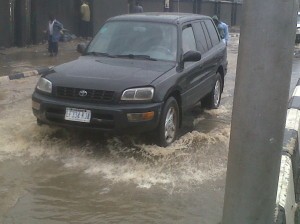 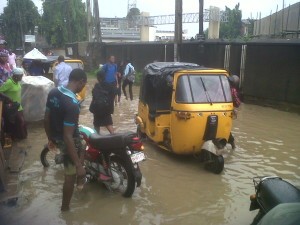