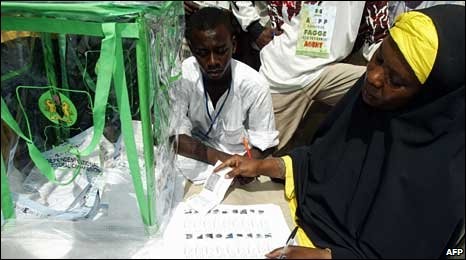 Finally what we craved and prayed for many years was granted and it was time to forget the past and look to a new lease of life filled with many hopes. We believed the new system will heal our land and make us forget all we’ve suffered in time past.

It was 14 years ago when the country finally embraced the Democratic system of government; we all believed that democracy is the ultimate cure to the ills inflicted on us by the cold chains and dark shadows of military imperialism.

Our hopes was that a democratic government will put an end to the incessant brutality and blood shed as well as the dreadful duo of bribery and corruption, but it was like pouring the same drink into a different bottle, since the return to democracy; neither God nor Nigerians have known peace. The funny intricacy of our twisted and bogus democracy is that the same circus players who bled Nigeria to death in the series of military regimes are the same ambassadors loitering the corridors of power today, a fortiori we have incompetent, wicked, fraudulent and desperate politicians with their immodest spouses trying to sully the nation to doom.

The epoch of our negated democracy has featured ruthless thugs and frisky criminals cloaking themselves as politicians, flagrant abuse of power by these so-called office holders and uncountable cases of invidious looting and unscrupulousness. These frontliners of our democracy, these vile unconscionable beings have all proven how amused they are by depravity and human desolation.

In these 14 years unemployment has soared to greater heights, our education sector is on the row of debacle,  constant electricity still remains a dream and with each day we get new promises of when it will be resolved and despite the huge investments, the power sector continues to deteriorate; The public office holders prefer to fly abroad to treat a headache rather than fix our health sector and provide hospitals for the masses; agriculture is in a quasi-redundant state and terrorism is gradually becoming a norm, These are but few of the many “dividends” of our democracy.

Last week I saw a shocking photo of an ongoing surgery in a hospital while someone was holding a rechargeable lamp, at first it was hysterical but truth be told it warmed my conscience on how human lives have become utterly meaningless. Over the years things have gone from bad transiently to worst but all these melancholy, grim re-occurrences and inhumane oppressions are nothing but the comeuppance for our decadent silence as ordinary citizens.

We all share in these problems regardless of our ethnic and religious background, we’ve been silent for too long and the earlier we stop hoping that things will get better automatically the better for us, those at the helms of our affairs have shown us they don’t care how we feel and even when they feel we are getting close to threatening them they distract us with religious or ethnic issues

What is wrong with Nigeria today is that we’ve  ignored our feelings,
the feeling that we deserve more than a tawdry democracy and mediocrity leadership. The feeling that an ideal democracy (even not 100% obtainable) is a government of the majority and we the masses are that majority- that voting out the incumbent dominating party is zilch if we don’t collectively set a standard for our political office holders. The feeling that it is our right to know and question our government and vote out the vampires there-in; the feeling that it is our collective responsibility to put out these ungodly sleazy politicians and reclaim our nation, the feeling that to ameliorate our nation positively requires collective efforts regardless of our religious and ethnic diversity and that hope alone will not get us beyond this point but rather our infinitesimal individual actions of patriotism because such actions are sine qua non to the utopia we all anticipate. It is time for Nigerians to know that the collective fight against corruption is the fight for good roads, good jobs, portable water e.t.c.

For us to progress as a nation we have to curb whatever barricades us from our much-needed unity; the problems of Nigeria are the problems for Nigerians irrespective of age, religion and tribe. If we really want to put an end to these inhumane oppressions and break out of the shackles of a bogus democracy, then its time for us to withdraw our investments from cowardice and dormancy and redecorate our beliefs with the motivation to move forward without regression, although success may not be guaranteed but we must advance towards the path that will positively re-shape Nigeria one day in the future, anything short of this is inadequate.

Its time we take our show of anger beyond the internet and let them know we can do more than the Egyptians, we aren’t zombies, we put them In power to serve our interest but they shown us that their interest matters most.

We’ve always asked: What Is Wrong With Nigeria but its time we start asking “What have I done to save Nigeria?”