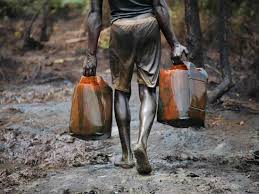 The economy is faltering as a result of criminals, but the authorities appear helpless

It used to be done with some modicum of fear. Not any longer. The volume of oil theft is now so staggering that it is already threatening the national economy with the 2013 budget seriously compromised. Only last week, Minister of Finance and the Coordinating Minister for the Economy, Dr. Ngozi Okonjo-Iweala said the country is losing around 300,000 barrels of crude daily to oil thieves, amounting to a loss of $1 billion per month. Yet rather than confront this growing menace frontally, the federal government seems to be throwing up its hands in helplessness, despite awarding a pipeline surveillance contract to Global West Vessel Specialist Limited, a company owned by ex-militant, Mr. Government Ekpomupolo a.k.a. Tompolo, to the tune of N15 billion in 2011.

To compound the situation, it would seem that the authorities that are charged with the responsibility of protecting our national assets have merely been playing dangerous politics with this maritime criminality. Just recently, the Director General of the Nigerian Maritime Administration and Safety Agency, Mr Patrick Akpobolokemi told Nigerians that he knows the people who steal Nigerian crude but would only release their names whenever he is ready; perhaps by 2015!

Yet so massive is the crime that the Joint Task Force (JTF) last week discovered another sets of illegal crude oil loading points in three communities in Bayelsa State. Such discovery explains why, following incessant attacks on its crude oil pipelines, the Nigerian Agip Oil Company (NAOC), a subsidiary of the Italian energy major, ENI, recently suspended its operations in Bayelsa State. But with these criminal cartels getting more and more emboldened, they are investing in barges, canoes and speed boats which they use in their illicit but booming business.

Bayelsa State Governor Seriake Dickson brought home the message of the impending danger rather vividly when he said last weekend: “What is going on is more of a threat to national security than even the loss of revenue that everybody is shouting about. Let me tell you that all the violence, brigandage and criminality that we experience in the Niger Delta states, particularly Bayelsa where I know more, have their roots in the activities in the creeks. It is from there they have easy funds to recruit followers; it is from these activities of crude oil theft and illegal refining that people are able to sustain such large numbers of youths and put them into various cult groups.”

We hope the authorities will pay attention to what the governor said. But since the military Joint Task Force (JTF) has been unable to match the criminals both in guile and sophistication, there are reports that a quarter of Nigeria’s crude oil production is now unaccounted for. To underscore the gravity of the situation, the Senate recently lent its weight behind those seeking capital punishment for oil thieves if that would help redress the problem. But the challenge is that you first must apprehend these people before you can put them on trial and for now, there is either a lack of willingness to rein them in or no capacity to do so by the relevant authorities.

While there is no doubt that the incidents of theft of crude oil now pose a deleterious threat to the nation’s economy and its integrity, it is evident that the problem persists because there is some form of official complicity in what has become an organised crime. It is therefore time that the federal government and its agencies took serious measures to contain the situation. Most reasonable people believe that the menace is growing in the level of skills and sophistication only because many law enforcement agents are compromised. More worrying is the fact that the trials of the few apprehended suspects are often impeded by the interference of some influential individuals who may themselves be complicit in this highly lucrative criminal enterprise.