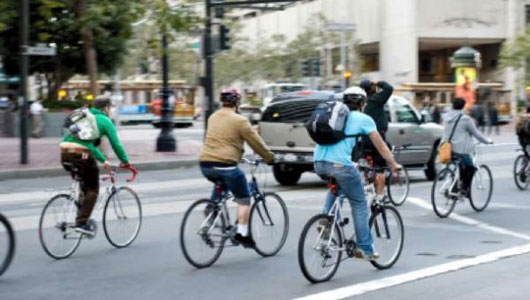 More than a decade after Chief Ojo Maduwkwe ran a campaign for the use of bicycles, the news is that the Lagos State Government is threatening to begin a public bicycle transport project. If Ojo’s campaign was misunderstood because it was overwhelmed by the melodramatic that crept into its execution, the fair verdict on that effort is that it was a very good idea that got shipwrecked by ‘connection error’. Now that we seem to have come full cycle and some thought is going into the actual purpose of Ojo’s campaign, maybe we can look at it shorn of the fripperies inflicted on it by its circumstance of birth.

The mileage the minister would have made at the commencement of the pilot Park and Ride project in UNILAG, with 150 bicycles, was marred by the distortion of his motives, following his ‘bicycle accident’. My article in The Guardian newspaper at the time, “Their Physics Versus Maduekwe’s Metaphysics” even infuriated a few readers, some of whom said the idea and the project all but sounded very silly. It just did not make sense that a serving minister in the government of Chief Olusegun Obasanjo should wake up one glorious morning and head to the weekly meeting of the Federal Executive Council (FEC) atop a bicycle. Those who initially thought that perhaps the man had had more than his fair share of some unusual brew quickly took a second take when the man in question turned out to be Ojo Maduekwe. Drink is never to blame for Maduekwe’s consistent trajectory, after all he rode to his office atop a bicycle to report for duty as Minister of Transport and was received by an apparently cheerful, but visibly worried ministry staff.

With that fateful bicycle ride mischief-makers set to work, claiming that he was proposing the use of bicycles as the permanent solution to the incessant fuel scarcity in the land. Those who overheard the mischief-makers then took up the chorus. Some even took space in the media to educate the minister on why the government should deal with fuel scarcity, instead of asking Nigerians to use bicycles. It was bedlam and Armageddon combined. The minister’s allegedly near-fatal accident while riding his bicycle only worsened matters.

The truth is that Maduekwe’s thinking began on the simple premise that every road user has rights, which must be respected. The right of the person who is trekking to cross the road, with automobiles deferring to him, is shown by the white lines at major intersections, known as “Zebra Crossing”. Pedestrian walkways are also regular features of most roads in civilised climes and neighbourhoods. Bicycle lanes are part of the deal and should come on board, since the bicycle user need not go into oblivion because there are automobile users on the planet. But see what we ended up with!

Maduekwe’s supposed collision with a bus was, again, a Revised Sub-standard Version of what happened. Driving out of his Mabushi residence unto the road leading to Maitama and the Villa, Maduekwe and his team had the unfortunate circumstance of emerging at the very time a bus without brakes was heading down the road. The driver apparently lost control of his bus and rammed into the side of another bus travelling in the opposite direction. That ended the bicycle ride for that day. It also ended any rides to the Villa for the rest of his tenure as Transport Minister; as his boss, the president, mildly advised against any future rides to Aso rock.

But the incident only gave some journalists a new angle to the story that was no less embarrassing. One of them asked me on phone to confirm that it was just the sound of two vehicles that collided far away from the minister that made him fall down from his bicycle. He also wanted to know how a minister who is brought down from his bicycle by a mere puff of wind can advise Nigerians to leave their cars and embark on a bicycle-riding expedition in the name of a “health for all” campaign. Now, who told him it was a health campaign, or that the minister asked Nigerians to abandon their cars? It was absolute conceptual mayhem, so I called a truce meeting. Midway through the meeting, someone asked me to tell them what actually happened. “Did the minster actually fall down from his bicycle” he asked. Keeping a straight face I said: “The Minister of Transport made a precipitate and unanticipated decent descent from his bicycle in circumstances that led to a slight loss of personal dignity.” One of the correspondents, my former student in the university, simply roared with laughter. Another muttered to his colleagues, “I told you the man is worse than Ojo in this grammar thing”.

But the logic of the response soon became obvious. The minister did not plan to come down from his bicycle at the time the misconduct of the bus driver forced him to do so. Therefore it is correct to say that his descent from his bicycle was sudden and unexpected. The other fact is that he did not land with his feet when he ‘descended’ from the bicycle, which is understandable since he was taken unawares by his own movement. Thus, rather than touch the ground with his feet, as would have been the right thing to do, another part of his body touched the ground without consulting him. This left some unacceptable deposit on his clean clothing. Thus it is true that the minister came down from his bicycle in circumstance that led to a slight loss of personal dignity, since it is not very easy to remain fully dignified with stained clothing. After this explanation or rigmarole, one of the more experienced correspondents proposed that they should all enjoy their lunch, declare a permanent ceasefire on the bicycle matter, while waiting for me to send them an English language version of what I had just told them. That was the end of their hostilities.

Speaking more seriously about the entire episode, however, the Park and Ride Pilot project was tried out in UNILAG, as a prelude to other such trials. The first problem was the inexplicable disappearance of the bicycles. The senior academic staff, all of who had cars, simply shared the bicycles among themselves. As special assistant to the minister, one had to travel down to Lagos to explain the purpose of the ‘donation’ all over again and get the university authorities to retrieve the bicycles, since they were meant for students, who would pick them up at the gate and leave them in designated places around the academic blocks for other students heading in the opposite direction to use. It worked for a while and would have continued if the bicycles were regularly maintained and replaced. The students conducted themselves with exemplary sense of responsibility.

The point to note in the misunderstood bicycle campaign is that Nigerian road contractors would long since have found it impossible to build any new roads without including bicycle lanes in our major cities today. This would have eventually become not just a law, but one of the mandatory specifications for road building, the way drainage is taken for granted in this regard. The “metaphysical” angle to the campaign refers to the more rarefied effects of the use of bicycles on public consciousness and the progressive realisation that bicycle riding is not a sign of poverty. Surely one does not need to head out in a big noisy box on four wheels to visit a friend in the same neighbourhood, when a bicycle would do.

Thus the campaign saw beyond the use of bicycles to the deeper issue of a national reorientation along the lines of simple and sober living, devoid of the pretensions that fuel the abuses and false lifestyle that people in public office seem unable to give up.
If it is therefore true that Lagos State is about to commence a biking programme, it must be well thought out, diligently explained and implemented in a sustainable manner. If also the state is about to mark out some roads in Lagos as ‘bike zones’, then it had better be roads that hold little prospect for petty thieves and area boys who molest road users in traffic in broad daylight.The infrastructure for this initiative would seem to already be in view, as commuters are expected to tie their bikes to the poles provided at the bus stop and join the BRT buses. The implication of this last point is that the state government may well have been planning this long before now, because the poles being provided at the bus stops, which were seen as a strange attempt at decorating the place, are actually for people to tie their bicycles, as they board the busses. Of course there is the further question of ensuring that at least some of the bicycles would be there when their owners return from their trip.

Finally, let us end on a lighter note by revealing that the day of the much-vaunted bicycle ride was actually not the original D-day. The minister was already fully poised to go to council with his bicycle when the chief detail in obvious panic called to say, “Oga wants to ride to the Villa, I beg you to come quickly”.  Fifteen minutes later, it turned out that Ugochukwu was not joking and there was no room for any discussion on the matter. Having loudly ordered the chief detail to position the bicycle under the portico and wait downstairs with his team for the minister, I waited until he was half way down the stairs and called him for further instructions. Meeting him as he was coming back upstairs, I whispered “deflate the tires, Ugochukwu just deflate the bicycle tires”. Audibly I said: “And don’t waste time with getting everything right.” It was a week later that the historic ride took place – with the consensus that we needed the one week to get a handle on the brain wave.