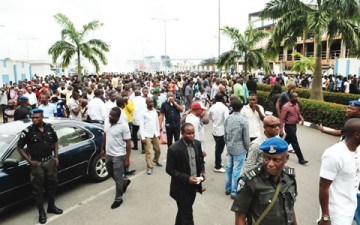 An Ijaw friend of mine from Bayelsa state who has been living in Lagos for close to 30 years now shocked me recently when he made a strong albeit stupid case for a second term for his kinsman, Goodluck Ebele Jonathan, as Nigeria’s president post 2015 general elections.

He pleaded that President Jonathan should be given another opportunity in 2015 to ‘wobble and fumble’ in the presidency again just like his predecessors did and were not denied a second term.

And in case you think the man was joking, he wasn’t. He was dead serious. He listed former presidents Shehu Shagari and Olusegun Obasanjo who didn’t do well in their first term in office and were still allowed to continue after four wasted years.

He argued that since every  elected president before Jonathan messed up the opportunity given to them to rule this country and were still given another chance to continue, then Jonathan should be allowed to complete his own ‘messing up’, so to speak before we clean up their mess. As he puts it ‘let the messing up go round’.

Don’t cry for him or Nigeria. That is the level to which our politics has fallen since we elected to promote ethnicity rather than competence in our choice of leaders in this country.

If not to appease the Yoruba for denying their son, Chief MKO Abiola the presidency of Nigeria in 1993 through the criminal annulment of his election, why on earth would any right thinking leadership hand over the rein of government to an Olusegun Obasanjo after he bungled the first chance he had as military Head of State between 1976 and 1979?  But that was what the so called cabal then did in 1999, when Obasanjo was ‘elected’ president, even against the wise counsel of his Yoruba kinsmen.

Was it not because the north must be allowed to complete its eight years at the saddle that President Shagari was given a second term in 1983 in spite of his glaring inadequacies?  President Umaru Yar’Adua would have asked for and given another four years if death had not intervened to cut short his presidency, even when the signs were there that things weren’t getting better. You could argue that Yar’Adua could have done better were it not for death, but on the evidence of his performance as a two-term governor of Katsina state, even ten more years wouldn’t possibly have changed anything.

So if you look around you, it’s been one mess up after another for our presidents (including the soldiers), and this was probably why my Ijaw friend was arguing that his Ijaw brother, our president, Dr Goodluck Jonathan be allowed to complete the South-south turn.

If we are to go by his argument, then the entire 500 plus ethnic nationalities in Nigeria should be allowed their chance to mess Nigeria up for eight years each. Did I hear you scream madness? Yes madness! Because that is what it is, but don’t laugh at him, rather pity him and some of his fellow Ijaw and South-southerners who are rabidly rallying behind a Jonathan-for-second-term project without a thought for the wellbeing of Nigeria.

By the way, my friend used to be a critic of the lack lustre Jonathan administration, until his recent 360 degrees turn. Why I wouldn’t know. But I know for certain that he didn’t change because he had been paid, but I suspect blind ethnic solidarity which had never been part of him before but which has now crept in and is distorting his sense of reasoning and perception, a malady that is gradually blowing across the Ijaw nation and to some extent, the South-south geo-political zone.

This malady is playing itself out in Rivers State where the ruling Peoples’ Democratic Party is in a state of civil war which has the tendency to derail not only this democracy but also the fabric of Nigeria’s existence as a united nation. The war has pitched Governor Chibuike Rotimi Amaechi and his supporters on one side against forces loyal to President Goodluck Jonathan, led by the Minister of State for Education Nyesom Wike.

The story of the unfolding war so far you know, but the whole story might not be known unless the key actors decide to open up. Governor Amaechi has promised to reveal all at a later date, sometime next year and he says Rivers people would be shocked. Wike in response says if the governor opens his mouth and says something, he too has a lot to reveal. But this is beside the point here.

What is of greater concern here is the dangerous dimension the whole crisis has taken which portends danger for the country.

Last week, four state governors from the ruling Peoples’ Democratic Party (PDP), decided to pay a solidarity visit to their colleague and Chairman, Nigeria Governors’ Forum, Rt. Hon Rotimi Amaechi, who they believe is facing persecution from the federal government for standing up against a tyrannical presidency.

The governors of Kano, Jigawa, Adamawa and Niger states who flew into Port Harcourt International Airport together with Amaechi were reportedly attacked by supporters of Wike (by extension supporters of Jonathan) and held hostage for hours at the airport by stone throwing thugs from the Wike backed Grassroots Democratic Initiatives (GDI), a group of political hoodlums that emerged from nowhere just as the Rivers crisis began.  Though unruffled, Amaechi and his guests had one of the vehicles in their convoy damaged by the thugs as they eventually made their way out of the airport for the Government House, Port Harcourt.

But after spending some quality time with their host, the governors eventually left for home but not before having some harsh words for the Nigeria Police whose officers and men reportedly looked the other way as the hoodlums held sway at the airport. They reportedly expressed concern at the glaring partisanship of the police against the state government in the crisis and threatened that state governments could reconsider their funding of the police if the trend in Rivers continues. They also deplored the political crisis in the state urging their colleague to stand firm.

The attack on the governors by Wike’s boys showed the level to which Jonathan and his band of supporters are prepared to go to achieve their 2015 objective. Thank God, at no time were the lives of these visiting governors put under serious threat. If all or one or two of them had been injured in the attack, only God knows what could have happened back home in their respective states. This is the kind of thing you get when thugs are allowed to walk the corridors of power.

I recall in the run up to the governorship election in old Oyo state in 1979, the then Unity Party of Nigeria (UPN), the party that later emerged victorious in the gubernatorial polls in what was then known as LOOBO states, comprising today’s south west, Edo and Delta states, had its primary and it was deadlocked. Chief Bola Ige locked horns with his former teacher at Ibadan Grammar School, Archdeacon Emmanuel Alayande (believed to be Chief Obafemi Awolowo’s preferred candidate for the position) and the deadlock was broken by a certain thuggish looking politician by name Chief Busari Adelakun. Governor Bola Ige was to later reward Adelakun with a seat in his cabinet as Commissioner for Local Government and Chieftaincy Affairs, against the advice of Chief Awolowo who we were told, warned that Adelakun was a mere thug, not fit for any serious political appointment. Bola Ige did not listen.

Those who know the story of the political crisis that engulfed Bola Ige’s Oyo state, or witnessed the mayhem that accompanied the National Party of Nigeria (NPN’s) determination to take over the state from the UPN would readily acknowledge, if they are still alive, the role the thug called Adelakun played in the blood bath. It might be necessary to add here that the crisis in Oyo state then was one of those crises that brought down the second republic.

Another thug is walking the corridors of power now and at the national level. The trajectory of his rise and rise to prominence is probably the fault of his benefactors, including Governor Amaechi and now President Jonathan, who instead of rewarding Wike (for whatever good  he must done to them) with a position commensurate to his thuggish disposition promoted him beyond the level of his competence. And now he is causing all this trouble.

Nigeria could have been on fire now if anything bad had happened to those governors. And nobody or only a few would remember that Wike’s ambition had a hand or even was the hand that ignited the fire, everything would be on Jonathan’s neck. The earlier the president knows this the better. He should call Wike and his band of thugs to order.