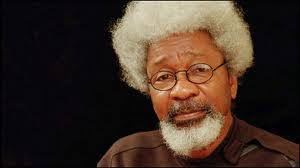 As the political crisis in Rivers State continues to elicit comments, Nobel Laureate, Prof Wole Soyinka, has called on President Goodluck Jonathan to call his wife, Patience, to order.

He said the crisis is eroding democratic grounds in the country. Soyinka, who took a swipe at the First Lady, for her alleged overbearing tendencies, spoke his mind during his State of the Nation address in Lagos yesterday.

He said though the Presidency has tried to absolve Jonathan from the crisis, “the perception out there in the world is that he bears a vicarious liability in the crisis”.

Besides, he said the indifference exhibited by the President creates an enabling environment for his followers to act on his behalf. Referring to events during the 11th Century, he said: “What I want to do here is to remind you of a certain historic figure.

I am sure most of us here must be familiar with Thomas Becket, who was ArchBishop of Canterbury in the 11th Century, who was murdered at the altar by four Knights of King Henry II.” Soyinka said: “Now, I have read on the pages of newspapers and watched on television that the President’s spokesmen have been trying to distance him (President) from what is happening in Rivers State.

They are doing their job and I wish them well, but they have to understand that the President has to understand the perception out there in the world, is that he bears a lot of responsibility for what is happening in Rivers State.”

Drawing a parallel, the Nobel Laureate said: “My reference to Thomas Becket was this: the absolute Monarchism that obtained at that time, was that King Henry II saw that Thomas Becket was becoming too influencial and what he said was that: will no one rid me of this pestilence?

What happened after that, was that four knights of the courts, went and attacked the Archbishop at the Cathedral. Historically now, we have five operators carrying out the imaginary will of the absolute monarch, again another parallelism.” “Again, I have been asking myself: are we not tilting towards absolute monarch?

There are many ways of saying: will no one rid me of this pestilence in Rivers State?

You don’t have to utter a word directly but from your conduct which can convey very strong signals or better still, say I will come after you,” Soyinka said.

While stating that he was not casting aspersions on any individual, Soyinka said, “ but I am saying that one can establish certain conducts in the mind of one’s followers, all of which circle around impunity. There are certain ways you can convince your followers, your officials, and your cohorts that they can act with impunity.

There are many ways, for instance, you can expose a prey and say: that prey is available. Let us go back to that historical story about 11 centuries ago, I want you to imagine King Henry saying: find some way of making the Archbishop’s carriage unserviceable or the carriage maker makes the carriage grounded. Even after the king’s counsel said this is unfair and that the Archbishop’s carriage should be released.

I hope you see the parallelism. I am yet to see a parallelism where the governor’s plane, under dubious circumstances, has been grounded, for I don’t know how many weeks now. And so, they pretend, nobody has spoken, nobody said anything in how one of your Barons or Dukes can function without a carriage. Now that kind of indifference can create an enabling ground for your followers or officials to take further actions, which can endanger that Baron or that Duke.

I am using this parallel so that we can understand that something strange is going on.” The Nobel Laureate said it is unfortunate that a mere domestic appendage of power could go to a state and take over the state for 11 days. “ A queen goes to the archbishop’s domain, stays 11 days. And the Baron is not even allowed to move. Creating an enabling environment for that Baron to be dealt with. He is stopped by a sheriff and that Baron is responsible for security and governance.”

Soyinka said: “I am calling on the President, please, curb the excesses of your wife. Too much is too much. Is she the first First Lady we have had? She is now being used to abuse the authority of an elected governor.

The Governor’s Lodge was teargased. Anybody who said teargas was not thrown into Amaechi’s lodge is either ignorant or lying. Some of Amaechi’s security have been removed. The democratic grounds are being eroded. With a teargas thrown, the next one may be a smoke gun”. Chiding the state Commissioner of Police, Mr Joseph Mbu for his role in the political imbroligio, Soyinka described him as a political policeman.

He said the President’s silence on the unfortunate development in the state is tantamount to an endorsement of the political crisis.

His words: “We have been through this route before. We must tell them that we are not conquered people. The case of Rivers is more absurd, more odious , where five members of the Assembly aided by the state invaded the Assembly chambers and chased away their colleagues. The silence of the President is an endorsement of the crisis. Let no one fool Nigerians, we know where this is coming from.”

Falana called on the Inspector-General of Police, Mr Mohammed Abubakar, to remove Mbu as the Commissioner of Police for allegedly violating the police code of conduct which prohibits officers from engaging in partisan politics.

By Ndubuisi Orji via Sun News