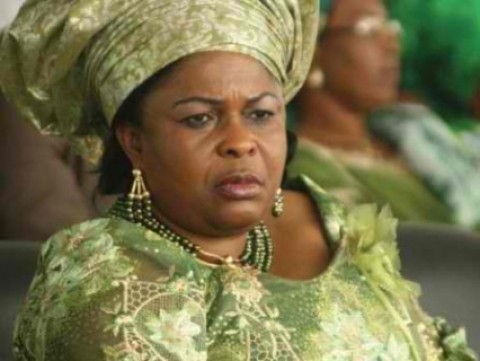 Wife of the President, Mrs. Patience Jonathan, on Monday faulted the contributions of some unnamed persons she referred to as “otherwise respected elders” who, by their views, had been contributing to the crisis in Rivers State.

While describing their utterances as unfortunate, she called on all feuding parties in the state to sheathe their swords in the interest of innocent women and children, who, she said, would naturally be victims of the mayhem.

The president’s wife’s position was contained in a statement by  her spokesman, Mr. Ayo Osinlu.

The statement read, “We therefore call on elders of the state to position themselves appropriately in the circumstances, and continue to seek the highest good of Rivers State and its people, by stone-walling the activities of the few, who would rather fan little embers into a consuming inferno.

“Recent experience whereby certain otherwise respected elders of the country, both from within and outside Rivers State, were canvassing views that seemed to intensify the heat in Rivers State, is certainly unfortunate.”

Mrs. Jonathan, who has been roundly criticised as one of the masterminds of the crisis alongside her husband, called on warring politicians in the state to spare a thought for the social, political and economic costs of the crisis, and consider an urgent way to resolve all political differences.

She warned all stakeholders to ensure that the situation in the state did not degenerate to a level that could be hijacked by miscreants and hoodlums, thus exposing everyone to insecurity from which there might be no easy escape. Chukwudi Akasike, Port Harocurt

Meanwhile, the senator, representing Rivers South-East in the National Assembly, Senator Magnus Abe, has declared that no amount of opposition can remove the Rivers State Governor, Mr. Rotimi Amaechi.

Abe, who bared his mind on the political crisis rocking the state, on Monday, explained that any move to impeach Amaechi would not succeed because the governor was “ordained by God.”

Speaking during the presentation of scholarship to 77 university undergraduates from Rivers South-East in Khana Local Government Area, Abe appealed to the people of the state not to be distracted by the political situation in the state.

He said, “We are living at a time when politicians of all shades are going around collecting young people, collecting people’s children; daughters and sons to help them pursue their personal ambitions or their public aspirations.”

Also, 17 suspended councillors of Obio/Akpor Local Government Area have faulted the resolution of the House of Representatives to take over the affairs of the Rivers State House of Assembly.

Members of the House of Assembly had engaged one another in a free-for-all, following an attempt by five lawmakers to impeach the Speaker of the 32-member House, Mr. Otelemaba Amachree.

The councillors, who were suspended alongside the chairman of the council, Mr. Timothy Nsirim, and his vice, Mr. Solomon Eke, for an alleged financial recklessness and abuse of office, described the resolution of the federal lawmakers as hasty and selective.

Speaking with newsmen in Orazu, Obio/Akpor on Monday, Chief Whip of the Obio/Akpor Legislative Assembly, Mr. Aruchi Amechi, argued that the councillor should have been protected when they were suspended by the House of Assembly.

Amechi said, “We express reservation over the selective manner the House of Representatives decided to intervene in the State House of Assembly matter. While our legislative council was first hit, our senior colleagues did not deem it fit to come to our aid.”