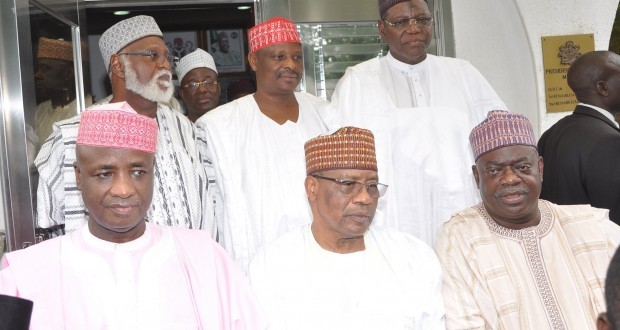 They said their concern was not about which zone will produce the President in 2015, but how to get to 2015.

They urged the two leaders to link up with other statesmen to save the nation’s democracy.

Told of the governors’ arrival in Niger State, the two former leaders decided to save time by meeting with them at the Presidential Lodge.

According to a source, who spoke in confidence with our correspondent, the governors told the two Heads of State about the “stifling of the political space”.

It was learnt that they listed five grouses:

•destabilisation of the Nigeria Governors’ Forum;

•clampdown on governors to force them to do the bidding of the President;

•intolerance of the opposition and opposing views by the Presidency; and

•lack of internal democracy in the ruling party.

The source quoted one of the governors as saying: “If what the President wanted had played out in Rivers State, Nigeria would have by now been on fire. Why will five lawmakers seek to impeach a governor in the House of Assembly with 32 members?”

The Presidency has always insisted that Dr. Goodlcuk Jonathan is not involved in the Rivers crisis.

The governors reportedly said: “We cannot also understand why four governors were pelted with stones by thugs for visiting one of their colleagues on a reconciliatory mission. We were shocked that the police were used to unleash mayhem on Rivers State.

“The plan of the Presidency is to be dealing with dissenting governors one by one.”

Another source told of how one of the governors told Gen. Babangida and Gen. Abdulsalami that 2015 is not the issue but how to get to 2015 for free and fair elections.

“The political environment as it is now cannot guarantee freedom of movement, freedom of speech and freedom of electoral choice”, the source quoted the governor as saying, adding:

“The governors pleaded with Gen. Babangida and Gen. Abdulsalami to link up with other leaders to call the President to order and protect the nation’s democracy from autocratic tendency.”

They said their observations do not amount to hatred for the President or any party, The Nation learnt

Both ex-Heads of State promised to bring the observations of the governors to the notice of the “appropriate quarters.”

It was learnt that Gen. Babangida and Gen. Abdulsalami were cautious in their response to the governors.

They chose to listen instead of talking, but it was apparent that they would consult with other statesmen,” another source said.