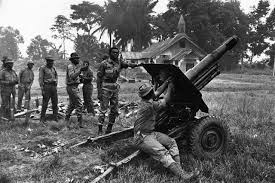 Were Chinua Achebe still alive, he probably would have brewed another classic, brimming with sardonic humour and laconic wit, from the July 18 launch in Lagos of The Tragedy of Victory, Brig-Gen. Godwin Alabi-Isama’s Civil War (1967-1970) memoirs.

The new war account recounts the exploits of the Third Marine Commando (3MCODO), mostly under the formidable Brig-Gen. (then Col.) Benjamin Adekunle aka Black Scorpion, who attained both heroic and mythical status on the Nigerian side during that war.

Brig-Gen. Alabi-Isama (then Lt. Col) was Adekunle’s chief of staff. The author, ace strategist and military tactician, saw almost every inch of battle on the Atlantic Front, which proved pivotal and decisive in swinging the pendulum of victory and defeat.

Still, any literary wit with Biafra sympathies, having read There was a Country, Prof Achebe’s bitter swansong, could easily, “serves-them-right” manner, have turned the July 18 event into Nigeria’s own Tower of Babel, where Nigeria’s own victorious generals, under the tragically ironic banner of Tragedy of Victory, fall upon themselves in ferocious verbal combat.

Even more grippingly ironic is Gen. (then Col.) Olusegun Obasanjo, as personal metaphor of “tragedy of victory”. Obasanjo (as his name Olusegun, Yoruba for “The Lord has conquered”, suggests) took the Biafra instrument of surrender as final 3MCODO commander, after the more formidable Black Scorpion. On that, he was an immaculate victor.

But the tragic victor birthed when it was revealed that the all-conquering general, self-hyped to high heavens in My Command (1980), Obasanjo’s Civil War account, is the same that also reportedly fled for dear life from enemy fire, allegedly receiving bullet wounds in his rump!

Whether that allegation was true or not (Col. Oyinlade Iluyomade, aka Hitler, commander of the troops involved in that particular battle insisted it was), the war hero, military era head of state and first elected president of the 4th Republic, became the butt of hilarious jokes at the venue! That would count as a personal tragedy of victory.

But there is also a corporate side to that victorious tragedy.

The near-unanimity of opinions, among the gathered generals, was that Obasanjo, by craftily rigging the Biafra armistice to be a one-man show, gypped other war commanders of earned glory, thus somewhat echoing the perfidious tortoise that renamed himself “All of you”, in Achebe’s Things Fall Apart.

Factor in Alabi-Isama’s allegation that Obasanjo, as military head of state, conspired with Lt. Gen. Theophilus Danjuma, his chief of army staff, to boot him out of the army after only 17 years, and the perfidious tortoise’s parallel comes to the fore. Alabi-Isama, from his war account, was one of the 3MCODO brain boxes that did the dirty work before Obasanjo came to claim the glory.

Obasanjo rather viciously rubbed it in, in My Command, in which he emerged the sole super-hero, leaving the other commanders gasping behind as super-villains or just simple nincompoops – a claim the pair of Alabi-Isama and Lt-Gen. Alani Akinrinade, and indeed the armada of generals and other old soldiers at the launch, dismissed as voodoo tales!

Danjuma, chair and chief presenter at the launch, denied there was any anti-Alabi-Isama conspiracy, insisting that though he couldn’t recall the details, he had documents to show that whatever happened “followed due process”.

The tragedy of victory was also apparent from the after-war career trajectory of the triumvirate of Adekunle, Alabi-Isama and Akinrinade, the hardy trio that faced the hottest parts of the war and prevailed with uncommon brilliance.

Adekunle who, according to Wikipedia, renamed 3 Infantry Division 3MCDO, without even formal approval from army headquarters, suffered premature retirement in 1974 after only 16 years. He joined the army in 1958.

As at the time Tragedy of Victory was launched, Gen. Adekunle was down with illness, prompting his first son, Abiodun, to solicit for support. Adekunle’s odyssey is not much different from the bulk of old soldiers at the occasion who complained of neglect, even after shedding blood to keep Nigeria one.

Alabi-Isama himself was retired after only 17 years, following the conspiracy he alleged but which Danjuma denied.

Only Akinrinade, of the trio, attained the apex of his career, not only becoming a three-star general as Lt-General, but also Second Republic’s first chief of army staff; and later chief of defence staff.

Could the anti-Obasanjo armada then result from peer envy? That is possible, except that the adverse testimony of Gen. Akinrinade, measured, frank, candid and nuanced, both at the book launch and in his widely acclaimed interview with The Nation from the eve of the July 18 launch, did little to enhance Obasanjo’s cause.

Still, Gen. Yakubu Gowon, Nigeria’s war-time commander-in-chief, did not share the near-unanimous belief that Obasanjo stole anyone’s glory by claiming the instrument of surrender, even while he was far away in his Port Harcourt headquarters, when Akinrinade mid-wifed the surrender.

“As the Commanding Officer assigned to command the Division that received the instrument of surrender from Biafra,” Gen. Gowon declared in a supplement Foreword to go with the second edition of the new book, “Gen. Obasanjo rightfully was positioned to claim victory on behalf of the Commander-in-Chief of the Nigerian Armed Forces.”

That coming from Gowon, though logical, was rare grace, compared with the nasty stuff Obasanjo wrote in his Not My Will, about his former commander-in-chief, following the unfortunate event of 13 February 1976: the abortive coup that claimed the life of Gen. Murtala Muhammad and propelled Obasanjo to his first coming as military head of state.

In Not My Will, Obasanjo, with exquisite bad grace, talked down on his old commander-in-chief, pillorying him as “Mr. Gowon”, tagging him with “duplicity and complicity” and celebrating his hurried “dismissal” (later reversed by 2nd Republic President Shehu Shagari) from the military – all these over mere suspicion of his alleged involvement in the Bukar Sukar Dimka coup!

Now, who is this Nigeria, the heartless errant-lady whose troubadours-general kill themselves to protect; and yet who rewards almost each and everyone with disgrace and hurt?

This is the crisis of Nigeria’s nationhood which, as Gen. Akinrinade correctly said, even the Civil War did not resolve.

But at the launch, Gen. Danjuma, a tad insensitive but with martial elegance, proclaimed: “Though they said there was no victor or no vanquished, all I know is that we won the war”!

Forty-three years after the war, every Nigerian would appear a loser – not the least the generals – and would continue to be until Nigeria’s fundamental contradictions are resolved by restructuring the country along equitable and development lines.

If Tragedy of Victory rams in this notorious fact, it would do a future patriotic duty just as it has done a past one by putting the records straight on the Nigerian Civil War.