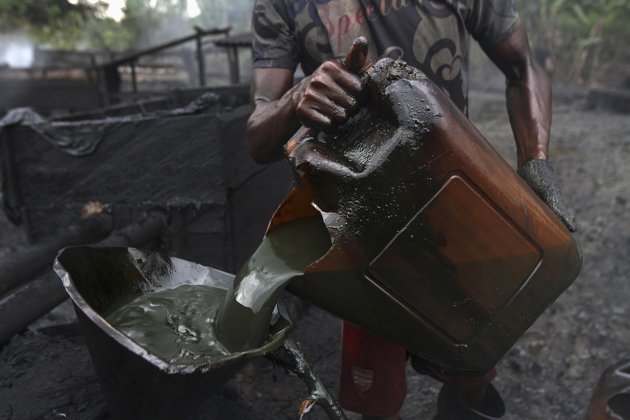 It is an open secret that Nigeria is the world’s capital of oil theft. At least, so says The Economist magazine of August 4, 2012. However, unlike other countries where either crude oil or refined products get missing, the Nigerian state does not even know, forget its posturing to the contrary, how much that is stolen daily. This is because the country still does not know how many barrels of oil it produces. Funny enough, it relies on figures provided to it by multinational oil companies operating in the country. The Minister of Finance, Dr. Ngozi Okonjo-Iweala, puts the figure of oil theft and illegal bunkering at  400,000 barrels per day while one of the Joint Venture Operators, estimates the loss to be between 150,000 and 180,000 barrels per day. However, if we rely on official government figures, it means that Nigeria and her operating partners may be losing a cumulative estimate of $40m (about N6bn) per day at a flat price of $100 per barrel of crude oil. This translates to an estimated N2.184tn per annum.

Experts suggest that the forms of oil theft range from local artisanal tapping of pipelines to very organised and sophisticated ones that many believe happen at the export terminals. But everything remains a guesswork that is often shrouded in secrecy.

At the G8 Summit in Tokyo in 2008, the late President Umaru Yar’Adua likened stolen crude to blood diamonds which aid corruption and violence and can provoke war! Despite the rhetoric to fight oil theft, the menace seems to be growing in its sophistication.  The Joint Task Force in the Niger Delta reported that it had destroyed 3,778 illegal refineries and seized eight vessels, 120 barges, 878 Cotonou boats, 178 fuel pumps, 5238 surface tanks, 606 pumping machines and 626 outbound engines allegedly belonging to oil thieves in the first quarter of 2012.  But who are these oil thieves?  Can there be any theft of that magnitude without perpetrators and collaborators? This is because the level of skill and sophistication deployed in successful oil stealing operations and export point to very powerful individuals who can play behind the scene roles to sustain the activity. Not a few, however, allege a complicity of high level politicians, former and serving military officers, militant leaders and former workers of oil companies. The helplessness often shown by several agencies that perform regulatory oversight in the sector leads many observers to reckon that there could be some collusion and connivance. There are the international cartels — those who operate ships illegally on the high seas to transport stolen crude and push same into the global oil market.

Apart for from the huge loss of revenue as estimated above, oil theft is a high risk business which has led to uncountable loss of lives and unquantifiable damage to the environment due to oil spills. Until recently, the multinational companies operating in the Niger Delta had not been concerned about the rate of crude oil theft. This is because it did not plunge them into any significant economic loss.

The government  knows oil export figures but it is challenged on production data. Nobody knows what happens from the well head, through the flow station to the terminal. It is this black box that harbours the crude theft phenomenon like the Guyana Triangle. No one cares or “gives a damn” about what happens to the crude until it reaches the export terminal. Even at the terminal, there is the alleged case of “topping”. In the absence of production data therefore, companies currently pay taxes and royalties based on available export figures and not production figures as stipulated by law.

The Nigerian Extractive Industries Transparency Initiative audits recommended the installation of a robust metering infrastructure both at the flow stations and the terminals in line with international best practices. That recommendation has been frozen by vested interests. At current royalty rates (20 per cent in case of onshore and 18.85 per cent in the case of offshore shallow waters) on every barrel produced,  companies will be estimated to remit about $8m (N1.2 bn) daily on the 400,000 barrels currently lost to thieves.  With a precision meter installed at the flow station, it becomes the responsibility of the Joint Venture Partners to bear the significant economic burden to ensure that the oil is policed safely to the export terminal. This is one of the surest ways of eliminating oil theft.

Let me now touch on the complex issue of “illegal” refineries. There are allegedly thousands of them scattered in the creeks of the Niger Delta. Many of those that engage in this very dangerous business complain that they have no other choice. This is an issue for debate. The Governor of the Central Bank of Nigeria, Mallam Lamido Sanusi, once suggested to  a Joint Committee of the  House of Representatives that these illegal refineries should be bombed. I disagree with him. Many of the young men are ex- militants or even ex-oil industry workers. Instead, concerned stakeholders should evolve sustainable means to deal with this to maintain the fragile peace in the region. A holistic approach that will ensure that these young people become gainfully employed in the long term will be helpful.  Part of the $1bn recommended by the United Nations for cleaning up of the environment in the Niger Delta region should include options for creating alternative livelihood opportunities for the youths.

Another important step towards reducing oil theft is a deliberate overhaul of the security system in the Niger Delta. A new company, Global West Vessels Specialist Limited, allegedly owned by one of the ex-militants, has recently been contracted to secure the national coastal waters with a view to reducing oil theft. The extent to which this development can reduce or complicate the issues remains a matter of conjecture.  The third step towards reduction of oil theft is finger-printing of crude oil to identify its originating fields. This could be technology-intensive, involving a combination of capillary chromatography with mass spectrometry and is only possible at a global level. But nothing stops the country’s authorities from aspiring to deploying it. The fourth important step is to prosecute those who have been arrested or indicted for oil theft. In the past, after arrests were made, little was heard about prosecution and punishment. This points to the allegation that powerful individuals who use high networks to frustrate the prosecution of such characters are involved. Sadly, the government does not have the political will to do the needful on a matter that is bleeding the nation’s economy.

How financially feasible are these solutions prescribed above?  Though funding of Joint Venture cash calls has been a challenge, plugging the leakages will put more money on the table in the long term. Furthermore, Platform, a United Kingdom-based research organisation, reported that Shell spent about $383m on third parties to secure their facilities in the Niger Delta from 2007-2009. After the declaration of the Niger Delta Amnesty programme, it is believed that the security challenge has considerably reduced and so such funds can  finance a robust fiscalised metering infrastructure at the flow stations so that Nigeria for once will know how many barrels of oil it produces. There is no sense in blaming the oil companies alone about the menace of oil theft.  Or, as President Goodluck Jonathan did the last time, blaming the international community for the menace. All the Joint Venture operators including the Nigerian National Petroleum Corporation, the security agencies and all stakeholders must work together.  President Goodluck Jonathan, as a son of the Niger Delta, bears a moral burden to bring this unpatriotic act of criminality to an end. This carry-go mentality must stop.

– This article was first published on October 10, 2012, but reproduced with modifications here because of its relevance to current realities.