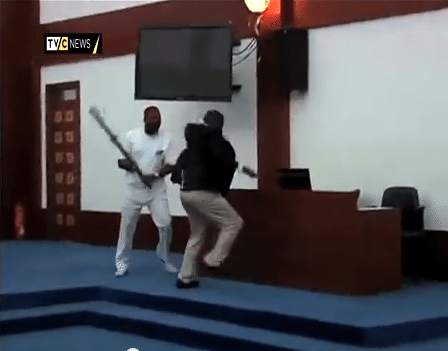 The political  crisis in  Rivers State degenerated  on  Tuesday as an attempt to impeach the Speaker of the House of Assembly, Mr. Otelemaba Amachree, sparked a free-for-all.

Five members of the House opposed to Governor Rotimi Amaechi had engaged about 13 of their colleagues in a fight shortly after the pro-governor lawmakers resisted the move to remove Amachree.

The Leader of the House, Mr. Chidi Lloyd; Michael Chinda  and Martins Amahule, were however, not lucky as they sustained  serious injures during the fracas.

Amachree is known to be one of the governor’s strong supporters in the  crisis ravaging the state since the past four months.

The five anti-Amaechi members, who were present at the House as early as 8am on Tuesday,  had  after procuring  a fake mace,   decided to take charge of the sitting after waiting to no avail for the Speaker and his Deputy, Mr. Leyii Kwanee, to arrive.

It was gathered that one of the anti-Amaechi lawmakers, Mr. Kelechi Wogu,  moved a motion for Amaechree’s removal as the Speaker, a development, which infuriated Lloyd.

Lloyd was said to have dashed out of the Assembly with about four pro-Amaechi’s lawmakers to inform the governor about the development.

Before Lloyd and the  four lawmakers returned to the House, the five  anti-Amaechi members of the Assembly had already impeached Amachree and elected  Evans Bipi as his successor in a sitting that  was  described as a  kangaroo plenary. Amaechree was accused of ineptitude.

It was, however, at the point where Bipi was about giving his acceptance speech that  Amaechi,  Lloyd, Amachree, other lawmakers and security operatives  arrived at the Assembly.

The House was immediately turned into a boxing arena as a majority of the lawmakers fought one another  with dangerous objects.

Lloyd and Amahule, who sustained  serious injuries  were rushed to the hospital for  treatment. Lloyd  accused   Bipi and  Chinda of using the tripod of a camera to hit him several times.

Scores of policemen, who were present when the incident occurred, watched helplessly as the legislators threw punches at one another.

Bipi was said to have punched the lawmaker from Abua/Odual Constituency, Mr. Augustine Ngo, who fell on the ground and was able to get back to his feet with the help of his aides.

Some computer sets in the  Assembly  were  also destroyed   during the fight.

Amaechi, who was apparently shocked by the development, ordered the arrest of the five lawmakers allegedly fomenting trouble in the Assembly but he was ignored by  policemen  who appeared to be divided on the crisis.

Calm however returned to the Assembly 30 minutes after the five anti-Amaechi lawmakers left the chamber of the Assembly   even as their leader  made spirited efforts   to be allowed to be part of the sitting.

The Assembly later sat with Amaechree taking over as the authentic Speaker  , even as the Deputy Governor, Mr. Tele Ikuru, presented a document for the amendment of the 2013 Budget to the House.

Ikuru and some members of the Government House Press Crew were said to have been attacked by suspected thugs after they left the Assembly complex.

Narrating how he was battered by anti-Amaechi lawmakers, Lloyd, who spoke to one of  our correspondents  from his hospital bed, said, “We went in as members who had not seen ourselves for sometime because of the crisis in the state.

“I was on my seat and without provocation,   Bipi came to me in the full glare of everybody  and started  punching   me.

“As his leader, I did not react because I felt that it was something we could settle; whatever it was, maybe I didn’t greet him also. So when that continued, the speaker intervened.

“Then he (Bipi) reached out for the tripod that stands the camera, used it freely on me, himself and  Chinda. They flogged me to their satisfaction, I didn’t just utter a word until   I  was  asked to run   because they  had  brought in  people with guns. When I looked at the gallery,  they were shouting who is the  Lloyd, who is the Lloyd.

“So at that point, I’m sure somebody may have reached out to the governor of the state, who came in with his own security because these other policemen were there standing helplessly and  watching what was going on. So he came and rescued members out of the place. ”

Llyold said with the non-challant attitude of the Police, he had become “so helpless.”

He lamented, “I don’t know who to run to. I can’t go to the commissioner of police because he is already in the arena; he’s already on the other side. I’m appealing to well-meaning Nigerians to pray for me and my family.

“Nigerians should pray for me and come to our aid.  I want to use this opportunity while in the hospital here, I have received phone calls of threat to life for my family and I. The state (Rivers) is under siege. You can’t even vouch for the safety of the governor.”

He said before the free-for-all broke out, Amachree  had directed that the Assembly be reconvened to consider an amendment to the 2013 appropriation law which Amaechi  had communicated to him (Speaker).

The Assembly leader explained that because the speaker sensed danger, he requested  the  Clerk of the House to write  the Commissioner of Police and the commander of 2 Amphibious Brigade who also doubles as the head of the internal JTF to provide security for  Tuesday’s  plenary.

He alleged that the  the Anti-Amaechi lawmakers procured a fake mace  which they used to convene.

After the brawl, Amaechree  and Bipi disagreed on who was the authentic speaker of the Assembly.

Amaechree, who spoke with newsmen in Port Harcourt shortly after presiding over the plenary, said it would be impossible for five out of the 32 lawmakers to impeach him or   Amaechi.

He alleged that  that  Bipi, who  attacked him and  Lloyd,   brought  in hoodlums into the Assembly  to also unleash mayhem on  his colleagues.

Amaechree said the Assembly would send a formal complaint to the National Assembly on the development, adding that though the  lawmakers had  adjourned    indefinitely.

He said, “As far as this Assembly  is concerned, the leadership  has not changed. I am the Speaker of Rivers State House of Assembly and all the other officers and the Clerk are here with me. The leadership of the House is intact and what   Bipi told you is pure fallacy.

“The Assembly will continue to sit, but for now, we have adjourned sine die (indefinitely), but we can reconvene anytime. For the Assembly  to impeach the speaker, two-thirds of members must agree. Now, count how many members that are with me here. We are 23 members here, you can count us. No mace was brought into the Assembly.”

He, however, explained that members  would meet to determine the disciplinary action that would be taken against the five anti-Amaechi lawmakers.

But Bipi, who spoke in a telephone interview with The  PUNCH, said he was currently in charge of the affairs of  the  Assembly.

The lawmaker  representing Ogu Bolo   Constituency, pointed out that though his aim was not to impeach the governor, he could do so   if   Amaechi  failed to comport himself.

The anti-Amaechi lawmaker expressed anger that the governor could leave Government House to supervise the impeachment of a speaker.

“I have no intention to remove the governor of Rivers State. But if the need to remove  him  arose , I would  do that. Now, I am the Speaker of the Assembly because I was duly elected.”

Rivers State Police Commissioner, Mr.   Joseph Mbu,  said he  received a call from Amaechi,   informing  him that he was going to the Assembly because  some lawmakers  complained that they were not safe.

He also confirmed Lloyds’  claim that he  was  requested   via a letter from the Clerk of the Assembly  to provide   police security because of the resumption of sitting of the Assembly.

Mbu noted that he granted the request  by sending half a unit to the Assembly for security.

He said, “At about 21.00hrs of same yesterday (Tuesday), the Brigade Commander wrote to me requesting me to please provide police personnel to the House of Assembly. He attached a letter written to him by the same Assembly requesting the presence of soldiers in today’s (Tuesday) sitting.

“It was there and then I called the Commander of Mopol 19, CSP Braide, to send half a unit to the House of Assembly. On my way to the office, I saw the mobile police personnel and detachment of C4I, Civil Defence with sniffer dogs checking persons going in and out of the Assembly gate.

“I saw his convoy through my office window driving into the Assembly. I was told he was in the chambers where there was fighting with all his aides ”

The House of Representatives  had  beefed up its ad hoc committee on the crisis in Rivers State,  by including the Majority Whip, Mr. Ishaka Bawa; and the Deputy Leader, Mr. Leo Ogor, on the membership.

The development followed a complaint by a lawmaker from the state, Mr. Andrew Uchendu, who reported that “militants and ex-militants” disrupted the sitting of the State House of Assembly in Port Harcourt

“Over 20 militants and ex-militants invaded the state House of Assembly this morning and disrupted the activities of the House. The Commissioner of Police was informed but no action was taken to stop the attackers.

“People were injured; as I speak, members of the House insist on sitting with their blood-stained clothes”, Uchendu told his colleagues.

Uchendu said he was not surprised by the alleged failure of the police to act, owing to the raging feud between the state command and the state Governor, Amaechi.

“What is happening in Rivers State today is not democracy in action. We fought so hard for this democracy that people are toying with today”, he added.

The House had set up an ad hoc committee last week to intervene in the crisis after relations between Amaechi and the state police command deteriorated to a point of name-calling.

The Deputy Speaker of the House, Mr. Emeka Ihedioha, who presided over Tuesday’s session, expressed shock over the turn of events in Rivers State.

He stated that the House was committed to finding a peaceful solution to the tension in the state, a reason he named Bawa and Ogor to beef up the intervention committee.

“My ruling is that the committee must conclude this work and get back to the House by Tuesday next week”, Ihedioha declared.