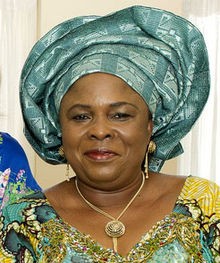 The pull-my-lips-I-spit tussle between the First Lady, Patience Jonathan, and Nobel Laureate, Prof. Wole Soyinka, took a somewhat amusing turn when some Nigerians called for a debate between both parties. The call is a far-fetched joke, most likely intended to ridicule “the Dame”. However, before we turn the whole affair to an Awada Kerikeri performance, it is instructive that we go away with a few lessons from this experience.

In the past couple of weeks, there have been all kinds of commentaries calling out Mrs. Jonathan on her seemingly “unruly and unbecoming behaviour”. The editorials — and the responses they generated — range from the insightful, to the amusing, to the appalling. Some were sexist and paternalistic, the subtext urging the President to put on his trousers and be the man in his own household. Put in a different way, if a man cannot control his wife, then how can he claim to be in charge of the nation?

A number of these commentaries have been insightful –and repetitive — but I will enjoin all commentators, editorialists, op-ed writers, etc. to leave the Dame alone. There is just too much energy expended on her and she is not even the biggest problem facing Nigeria. One thing we should all note is this: If the Dame is going to change for the better, she would have done so, many years ago.

She and her husband have been in the corridors of power since the present democratic dispensation started in 1999 and, if by now, she has not learnt, as people accuse her, to exercise the restraint her place as the President’s wife demands of her, chances are that she will never do. And there is very little anybody can do about that. She is the only one who can help herself in that respect. Most people, by now, have seen the image of the First Lady rushing out of the presidential jet ahead of her husband in one of the President’s numerous foreign travels, breaching protocol in the process. The image is iconic in many ways; it portrays her as the Madam-at-the-top, someone whose comportment even the President and his handlers are quite helpless about.

I will compare her with the United States First Lady, Michelle Obama, just to show how the office one occupies can radically transform one’s manners. When her husband was first elected, Mrs. Obama endured bludgeoning in the hands of the US media. They dragged out her ancestors’ slave history; some made snide remarks about her Chicago ghetto upbringing; they relentlessly attacked her over perceived anti-patriotic comments. She was not spared the stereotypic portrayal of the Black American woman as masochistic and full of pathological anger. However, in a year, a lot about her perception changed. She would eventually become a “lady” and a fashion icon. Obama owes part of his re-electability to her image.

When a First Lady invests a lot of effort into her self-improvement, it says a lot. It means she respects her husband enough to reincarnate herself because she knows that whatever she does, or however she carries herself, will come back to affect him. It also means she respects the citizens who see her as the person who sleeps closest to the president. It says she cares about the people who see her as an extension of her husband. She knows she is a reflection of his personal choices and in one way or the other, he will be judged based on her character.

No, the First Lady is not a “mere domestic appendage” of her constitutionally-sanctioned office holding husband. She is her husband, and her husband is her. From Maryam Babangida to Mrs. Jonathan, our First Ladies have been an image of their husbands’ administrations. Many of them match their husbands, corruption for corruption, tyranny for tyranny. Even at state levels, the story is not different. We have seen a Muslim First Lady who attended a church service and when given the microphone, began to rain curses on her husband’s political enemies. How more can you say about that?

One of the hobbyhorses of commentators is to point out that the “office” of the First Lady does not exist, constitutionally. Big deal! The state picks its bill, the occupiers fly in presidential jets, go on campaign trails, are quite visible and in the case of Mrs. Jonathan, Nigeria paid the expensive surgical bills she racked up in Europe. So, what is left for us to acknowledge an office exists? Or, if the use of the term “office” constitutes a legal impediment, then, let’s refer to its place as status or position. The bottom line is that the “office” exists, and the occupier does more than stay at home to knit the president’s socks.

The First Lady’s controversy is however, instructive. In future, when we go to the polls, we should elect people along with their spouses. I do not buy the argument that First Ladies are meant to be separate from their husbands’ offices. When we privilege such distinctions, we end up with needless controversies such as the one the Dame has generated. In saner countries, Jonathan would never have been elected president with the kind of alleged sleaze baggage slung around his wife’s neck. Nobody would have touched him with a telephone pole.

But, if we let the First Lady’s case be a lesson, it could be the beginning of greater things to come. Candidates aspiring for elective offices will carry their wives along; the wives too will work on themselves more. Some will attend finishing schools; some will hire a PR team to build their image; some will learn the art of public speaking and some will lose weight to look healthy.

In the meantime, let us let Mrs. Jonathan be. Nigeria currently has bigger problems than her, frankly. Boko Haram massacred 46 children in gruesome circumstances and has vowed to slaughter more. All the government said, and has always done, is to “condemn in strongest terms”, nothing more! Most of our statesmen who vowed to rescue Nigeria from the pit of corruption have not demonstrated that those killings are worth their attention. The President himself is so helpless that the best he could do is to banish Boko Haram to hell! The unemployment rate in Nigeria rises daily and millions of children are out of school. Those are urgent issues we should expend energies on. The Dame will come and go like others before her. But Nigeria’s many existential challenges stare us in the face, all year, month and year long!