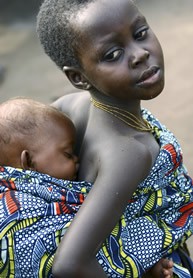 This is one controversy, which nearly every actor, reporter, commentator, and protester at least partially got wrong one way or the other. The basis of the controversy is provision (4)(b) in Section 29 of the 1999 Constitution, which deals with the qualification and procedure for the renunciation of citizenship. It is a carryover from the military’s 1979 Constitution. It is not a new law. It was not created by the Senate. Even as an old provision, it was never meant to be a marriage law. Neither the Constitution nor the Marriage Act recognises a marriage age that is less than 18.

Here’s the entire Section 29 in order to facilitate the following discussion:

(1) Any citizen of Nigeria of full age who wishes to renounce his Nigerian citizenship shall make a declaration in the prescribed manner for the renunciation.

(2) The President shall cause the declaration made under subsection (1) of this section to be registered and upon such registration, the person who made the declaration shall cease to be a citizen of Nigeria.

(a) the declaration is made during any war in which Nigeria is physically involved; or

(b) in his opinion, it is otherwise contrary to public policy.

(4) For the purposes of subsection (1) of this section.

(a) “full age” means the age of eighteen years and above;

(b) any woman who is married shall be deemed to be of full age.

If the purpose of subsection (4) is to define the age qualification for renunciation of citizenship, then provision (b) is redundant. That’s why the Senate removed it by voice vote. But paedophiles, like Senator Sani Ahmed Yerima and his associates, must have understood why the redundant and controversial provision was included in the 1999 Constitution, and retained in subsequent amendments. They must have been using it as a cover for marrying underage children, including the 13-year-old Egyptian girl Yerima married in 2010. That’s why he mustered enough support to force a revote, this time by electronic voting. Unfortunately, there were not enough votes to sustain the removal. So, provision 29(4)(b) was put back in.

By the time this failed attempt hit the newsstands, it was carried by many reporters more or less as a new law that allowed for child marriage. The implication of this old provision as a cover for child marriage was no longer the issue, the present Senate suddenly became culpable for its authorship! In particular, Senators who rightly or wrongly voted for retaining the provision became special targets of attack. This was particularly true of the Senator from Ondo State, Patrick Ayo Akinyelure, whose constituency, the Ondo Central Senatorial District, immediately summoned for questioning.

The question that arises here is: Where have the reporters and critics of the provision (now misunderstood as a new child marriage law) been since 1979 (33 years ago), when the clause was smuggled into the Constitution, and retained in the 1999 Constitution and in subsequent amendments? The answer is simple: Most Nigerians have never read the Constitution, partly because of the high level of illiteracy and partly because the document is not widely distributed. And I bet you, even many reporters and legislators never read the Constitution, unless there was a constitutional crisis. Even then, only the relevant section was read, if at all, sometimes out of context.

Here then is a lesson for legislators: Once the ongoing amendments have been ratified, the Constitution should be mass-produced, translated into the three major languages, and circulated widely, constituency by constituency. It should even be embedded in appropriate textbooks from secondary school upwards. It is not a sacred text for lawyers and legislators only. Americans understood this early and widely circulated their constitution. It is even reproduced in full in any standard Dictionary of American English. It was the constitution that provided the context for the civil rights struggle and even for the ongoing protests against the Trayvon Martin verdict.

This brings me back to the Ondo Senator, who wept openly and apologised to members of his constituency for mis-voting. But the context and significance of his action were lost in the focus on his apology. First, the immediate protests by the people of his Senatorial District show the high level of political awareness in the district in particular and Ondo State in general. These are people who would go to any length to fight for their mandate, vote out a non-performing elected official, and re-elect a performing one.

Second, although Akinyelure remains culpable for his mis-voting claim, he deserves credit for showing up immediately to respond to the protests, thus demonstrating his understanding of his constituency and the respect he has for its members. I was at the Adegbemile Cultural Centre at Akure on that day, where protesters had gathered, and watched as they grilled their Senator and rejected his vote for what they understood as a new child marriage law.

As a concerned elder in the Senatorial District, I had wanted to placate the protesters by explaining the history and context of the controversial provision, but, on that day, that hall was not the forum for public intellectualism. Raw emotions were on display, as a sea of women in the hall sought to protect their daughters from what they thought was the new law of the land. The Senator had no option but to respond with an emotionally-laden apology. At the end of the day, the event showed participatory democracy at work. It demonstrated the power of the people as the source of authority and the burden on politicians to respond to their call.

Back to the Senate, the protest over the notorious provision of Section 29(4)(b) speaks to larger issues in our national life. It demonstrates the role of identity politics, notably religion, ethnicity, and gender, in shaping our political perceptions and behaviour. Yerima argued for the restoration of the provision by blackmailing non-Muslims in the Senate for insensitivity to his religious beliefs.

This was one occasion when Yerima’s religious zealotry should have been called off. But the Senate President, David Mark, succumbed to the pressure against the background of our national history: Identity politics has been the bane of Nigerian politics, from the regional and ethnic crises of the 1960s, which precipitated a military coup and a civil war, to the ongoing regional and zonal struggles for power, which underlie the rise of internal terrorism. Nevertheless, Mark should still be praised for the Senate’s failed attempt to remove the obnoxious provision.

Although his recent remarks may have doused the tension associated with the protests, the issue is not dead. Rather than run off with commentaries on child marriage and Yerima’s paedophilia, the press should ensure that Mark keeps his promise of revisiting provision 29(4)(b), with a view to expunging it from the Constitution.

At the same time, however, it must be realised that identity politics cannot be wished away from our national life nor can our democracy be magically cleansed of primordial considerations. The case of Section 29(4)(b) shows the futility of our attempt to reproduce the American-type of democracy. Rather, we must properly domesticate our own democracy, first by recognising the influence of primordial considerations and, second, by convening a national conference to agree on how best to proceed. We must work hard to get the democracy we really need, rather than oil a copycat democracy that does not suit us.