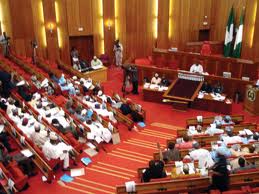 The legislative chamber is a hallowed place. It is a temple of sorts with its members as ministers. There are rules guiding its operation and members are expected to play by the rules. Those who don’t are sanctioned to deter others. In this present dispensation, the National Assembly comprising the Senate and the House of Representatives as well as the Houses of Assembly in the 36 states constitute the legislature.

In our land, it is a big deal being a member of these legislative houses because it confers prestige and honour on such a person. Even a mere councillor in the legislative house of a local government is referred to these days as ‘honourable’. Now, do you see why being a lawmaker is the next thing to being god! Our senators go by the appellation ‘distinguished’ and members of the House of Representatives (MHR), ‘honourable’

With such fancy names, they are expected to lead by example. They should be role models for the up and coming, who need to be impressed. But are they? In most cases, our lawmakers’ conduct leaves much to be desired. If they are not quarrelling over allowances and cars, they may be bickering over what is generally regarded as juicy committee positions. They either want to head the finance and appropriation committee or the petroleum committee.

At other times, they may be split along party or ideological lines which involves matter of principles. If this is the case most times, Nigerians will not begrudge them. We will rather hail them because it is good for a man to fight on grounds of principle. Thus, if our lawmakers fight ideological fights as much as they wage battles over allowances or other mundane issues, we their constituents may not be bothered that much. We only get agitated when they fight for selfish reasons.

It is always fun watching our lawmakers fight. They roll up their trousers, pull off their shirts to exchange blows. At times, they use the mace as weapon of war as it happened at the Rivers State House of Assembly last Tuesday. The Rivers show of shame was a skirmish waiting to happen. The clash had been brewing for long, but it didn’t start in the Assembly. It started with Governor Rotimi Amaechi’s problem with the Presidency over 2015.

President Goodluck Jonathan’s loyalists believe that Amaechi has presidential ambition and so must be stopped from realising his dream in order not to spoil their man’s chances for the exalted office in 2015. The president has not said anything about 2015, but his body language has said more than enough. Jonathan will contest the 2015 poll, I make bold to say before he tells us so next year formally. I am no soothsayer, but all the signs indicate that the president is interested in running.

It is this interest that is at the root of the crisis in the Rivers Assembly where lawmakers loyal to his minister, Nyesom Wike and by extension himself, and those for Amaechi slugged it out last week. Five of the 32-member Assembly are for Wike. It was this minority that attempted to impeach Speaker Otelemara Amachree and impose Evans Bipi as the new speaker. It failed in its mission because the 27 other members, who are in the majority, resisted the move with all their might. What happened next is now history.

Some of the lawmakers are still nursing the wounds they sustained in that fight. That serves them right, you will say. But the issue is deeper than that going by what we have been seeing since then. Could the July 9 Rivers Assembly have been averted? The answer is yes, if only the police had been proactive enough. By their own admission, they were invited to provide security at the sitting but never took it seriously until the army intervened.

According to Police Commissioner Mbu Joseph Mbu, ‘’I was nonchalant about the Assembly’s request for police security because it is unusual for them to request for police when sitting. Moreover, there is a police station with men attached to the Assembly’’. The lawmakers, who wrote to him, know that there is a police station attached to the Assembly before coming to him. Something must have informed their action and that was what the police chief did not take into account.

He did not ask himself this question: Why are these people writing to me when there is ‘’a police station with men at the House of Assembly’’? If he had asked himself that question, he would have thought twice before ignoring the request. The fact of the matter is that if the Army Brigade Commander in Port Harcourt had not written to Mbu, he would have remained ‘’nonchalant’’ about the Assembly’s request. That is not how to police a state which he oversees. He should take part of the blame for that day’s crisis.

If his men had been on ground

that day, chances are that the

mayhem may have been averted. Nobody leaves fire on his roof and goes to sleep; and this unbelievably was what Mbu did in this case. This is, however, not to say that the lawmakers’ action is not condemnable. It is sad that they desecrated the hallowed chambers of the Assembly because of the desperation of a few people to impeach the speaker. It is only in our country that the minority is always scheming to override the majority. They tried it in Plateau and Oyo states and failed in court after the kangaroo impeachment of Governors Joshua Dariye and Rashidi Ladoja, yet they didn’t learn a lesson.

Why do they think they will succeed in Rivers then? This kind of legislative rascality which seems to always enjoy executive backing must stop if we truly wish to grow our democracy. Our democracy will grow if we allow the age-long dictum of the majority having its way and the minority having its say to prevail in everything that we do. But will our politicians allow that?