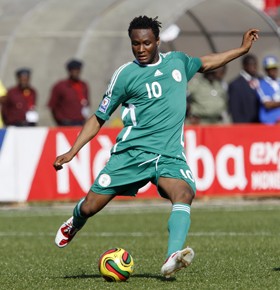 Mikel, who was named 2nd best player at the FIFA U20 World Cup behind Lionel Messi, had seen his stock drop since those days, reports futaa.com.

At one point, Nigerian football fans questioned his loyalty and commitment to the Super Eagles cause, but all that changed at the 2013 Nations Cup, when Mikel turned out five star performances, and he has been on the upward spiral since.

Now, futaa.com has learnt that the turn-around came as a result of frank talk between the midfielder and the coach.

“Keshi told Mikel to buckle up and show Nigerians that he really is a patriot, and not the I-don’t-care character the press portrays, a source in the NFF told futaa.com.

“Keshi had called him and asked why he is not giving his all to the team. It was a discussion, as Mikel reiterated his patriotism and commitment.

“The coach then discussed tactics with Mikel, who is quite intelligent. It was about how the team could get the best out of his game. And the result has been there for all to see

Mikel has been outstanding for the Eagles, and the good form continued to the Confederations Cup in Brazil, where the Chelsea man stood his ground, especially in the games against and Uruguay.”