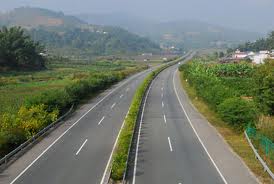 President Goodluck Jonathan on Friday inaugurated the reconstruction of the Lagos-Ibadan Expressway, with a pledge that the N167bn project would be completed in 48 months.

He inaugurated the project as thousands of road users were grounded for about three hours on the Lagos-Ibadan Expressway and Abeokuta-Ore-Benin Expressway.

The road users were prevented from accessing the Sagamu interchange until the ceremony ended around 12.15pm and the President left in a helicopter.

The reconstruction of the 35-year-old road is being handled by Messrs Julius Berger Plc and Reynolds Construction Company Ltd.

While the lanes on both expressways were blocked with armoured personnel carriers, armed security agents were deployed around the interchange to check human and vehicular movement.

Some of the commuters who spoke with our correspondent said they were not aware that the President had an assignment at the interchange and were caught unawares by the gridlock. They blamed the President for adding to their hardship on both roads.

A motorist, who identified himself as Kunle Daramola, said commuters should have been warned beforehand to tarry a little for the ceremony to end before commencing their journeys.

He said, “My wife and I were to join my brother in Ibadan. He is taking his bride to the registry this morning. Now, we are stranded here and to worsen the case, I am standing in for our father as the first born. He has been calling me since but there is nothing I can do now despite the fact that we left very early to beat the traffic. It is not fair at all.”

A commercial bus driver, who identified himself as Allah Dey, was very furious when he was narrating his ordeal to our correspondent. He said, “When we saw about three helicopters flying a moment ago, we were thinking that maybe something serious had happened until someone said it was because of the President. I don’t know why they have to block the roads when the President is not travelling by road.

“Now that they are blocking the roads just to signal the commencement of construction, what will they do when they finish work on the road?”

The President, who flew to the interchange in a Nigeria Air Force helicopter, was accompanied to the venue by the Ogun State Governor, Ibikunle Amosun, and Lagos State Deputy Governor, Mrs. Adejoke Orelope-Adefulire.

Apart from the NAF chopper, two others belonging to the Nigerian Army were part of the President’s fleet.

The President said he was delighted that at last, work was beginning on the road and promised to deliver.

Jonathan said the rehabilitation of the road was long overdue considering the fact that it connects Lagos, the economic nerve centre of Nigeria, to other parts of the country.

The President stated that 50 per cent of the economic transactions being conducted in the country were done between Lagos – Ogun area through the 35-year-old road.

Acknowledging that the 127.8km road was long overdue for reconstruction, the President also promised that the Federal Government would intervene in the rehabilitation of other federal roads traversing Ogun State as requested by Amosun.

He said that the Federal Government in 2009 entered into a concession agreement with a concessionaire, Bi-Courtney Highway Services, as a premier Public Private Partnership scheme. He stated that the concession was terminated four years later due to non-performance by the firm.

Earlier in his speech, Amosun urged the President to pay attention to other federal roads in Ogun State to complement the state efforts in rehabilitating the roads in the state. He advised the Federal Government to ensure that the N167bn to be expended on the rehabilitation of the road did not become a waste of scarce resources.

He urged the FG to put in place a sustainable maintenance arrangement for the highway.

He attributed the deplorable condition of many infrastructural facilities across the country to the carelessness and bad maintenance culture among Nigerians, adding that Jonathan should direct the Federal Ministry of Works to employ more workers for the maintenance of the road.

Both the President and Amosun performed a symbolic construction work when they climbed one of the construction equipment and drove it for a distance.

The Federal Government had, in November 2012, revoked the failed Lagos-Ibadan Expressway concession contract awarded to Bi-Courtney Highway Services Limited in 2009.

In the concession agreement with Bi-Courtney Highway Services Ltd, which was terminated on November 19, 2012, the firm was to expand the lanes to 10 from Lagos to Sagamu, and six lanes from Sagamu to Ibadan. It was also expected to build trailer parks and five interchanges among other things at a cost of N89.5bn.