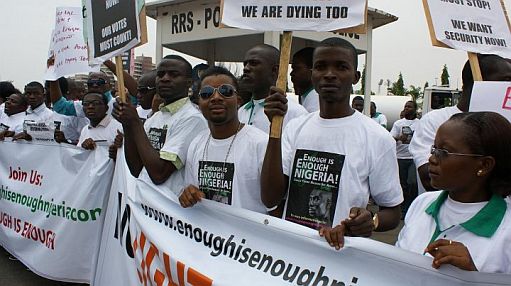 I see the impact of Nigerian current affairs in my daily life and most of what I see disturbs me. I am deeply troubled by the state of the nation. I recently decided to contribute to the debate about our future hence this article. As a youth, my immediate concern is the youths and the kind of future that awaits them, in this country of ours, Nigeria.

Things seem bleak at the moment for Nigeria. We have a government that is incompetent and incapable of tackling the challenges of our time. We are going through a violent and bloody uprising by a group of anarchist extremist who seem determined on bringing the nation to its knee. Looting of public funds is reaching record highs. Morality, decency and the rule of law seem to have become extinct.  With no power, no new jobs, no peace and no respect for rule of law what could possibly justify the title of this article?

The answer is the educated youth. I have come to believe that we have 3 types in this nation. The first two do little to aid the cause of progress while the last group is vital to any future hope that this country has. The first group is from the improvised parts of the society who have given up, they would rather steal, be armed robbers and killers or political tools used to aid election rigging. This realty is not entirely their fault; it is the reality that they had been thrown into by those that have stolen their future by making Nigeria underdeveloped. The only way to cure these people is through education and empowerment. It is of course easier said than done. It would require years of programs and policies by the government as well as well-off private citizens.

The second group involves “the lost generation” and is generally, though not exclusively from the upper class. They would rather listen to the latest celebrity gossip (who Kim Kardashian married and who she didn’t) or enjoy the latest Kanye West, Jay-Z or Rick Ross music than read books, acquire knowledge and actively participate in the debates about the future of our nation.  Of course there is nothing wrong with listening to music or watching movies, we all do it. It is part of the social and cultural realities of our time, but on some level you have to invest in yourself and you have to care about your country.

The third category of youth is from all classes, upper, lower and middle. These are the young people that give me hope. I have met some of them in school, some on social networks and I have been surprised. These are people that care about their country, they care about what happens to it and they apply themselves by arguing about the issues. This may not be enough to give us clean water, more power and to uplift Nigeria from the pits of poverty but it is a start. As the saying goes “children are the leaders of tomorrow” and if that is true then the importance of having a generation of people who can argue, discuss and come up with solutions to Nigeria’s ills cannot be over stated.

The nation is being run aground by a generation that has clearly over stayed its welcome. However we must not assume that everyone from the current generation of leaders is part of the problem. Some are colossus; great men and women who have sacrificed so much for this nation to the point of having nothing left to give, they have helped keep this nation afloat, even if barely. Some fought to keep the nation together during the civil war and some are still actively doing their best to reverse the direction which Nigeria is heading. Therefore as we talk about youth we must not be guilty of dismissing experience, as the African saying goes “what an elder sees sitting down, a child cannot see standing.” A compromise and mixture of youth and experience of elders will be the only way to help Nigeria. We must profit from the examples of people who have been in leadership positions and did things to be proud of. Despite our problems, we have had some wonderful leaders in the distant and recent times.

Let us hope that the intellectual youth that give me so much hope can move beyond the divisive politics of destruction, rise above ethnic leanings, nepotism and godfatherism and unite for the collective interest of our people. A new era of merit, honesty and hard work over all is needed and education is the key. By Helping and educating the young people we stand a chance against the architect of destruction that has impoverished our nation. Human development beginning with sound education is clearly the way forward for Nigeria.  May God bless our youth and may He bless the Federal Republic of Nigeria.

My conviction and believe in this nation will remain unshaken, although we have had enough reason to all give up, pack our bags and seek residency in other nations we must stay and we must fight and we must keep our hope alive. Hope, I believe conquers in the end. I leave you with a definition of hope by one of the most inspirational character of our time, President Barack Obama ‘’ I have always believed that hope is that stubborn thing inside us that insists, despite all the evidence to the contrary that something better awaits us, so long as we have the courage to keep fighting, to keep working, to keep fighting…”