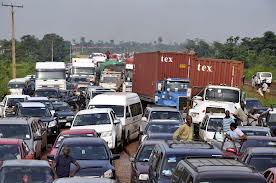 On Sunday, June 30, at two o’clock in the afternoon, I left the Redemption Camp for an appointment in Ikeja, a distance of about 40km. I got to Ikeja at about six o’clock, four hours later. When the journey was taking too long because of the horrible roads and the traffic snarl, I many times decided to turn back but the median divide prevented me from doing so until I was almost at the Berger Bridge. I had a premonition that I had not seen anything yet because the traffic going towards the Ibadan end was beginning to build up. After a brief stay in Lagos, I hit the road to go back to the camp at about 7pm; I had no problem from Lagos to somewhere near the Mountain of Fire Camp. From there on to the Redemption camp perhaps about 15km away, I spent six hours. I did not get home until 1am on Monday morning. This is a record for a 40km journey that started on Sunday afternoon and finally ended Monday morning. Within that time, I could have flown to the United States from Nigeria.

My colleagues said I was very lucky to have even made it home alive because whenever there is this type of traffic situation, people are routinely robbed while waiting in their cars and dispossessed of whatever money or valuables they might have on them. I kept asking myself where the Nigerian government is. Yet we are in a country that is over-governed with 774 local governments, 36 state governments and Abuja and at the apex is the Federal Government, the behemoth in Abuja. In spite of these multitudinous governments, the only arterial road linking the port of Lagos with the South-west, South-south, South-east and the northern states has remained in a state of total disrepair since the government of Olusegun Obasanjo in 1999. Since that time, trillions of dollars have been earned by the country and 80 or more percent of them have been spent on oiling government wheels and paying huge allowances to all kinds of government functionaries while the people have been totally forgotten and ignored. At about 12 midnight, I saw children and toddlers holding to their mothers who had alighted from the public run-down buses to trek home to various villages along the highway. On that particular night, it was raining cats and dogs and the peels of thunder and lightning were frighteningly audible everywhere. One can then imagine the way the little children must have felt. I asked myself several times over how Nigeria has got to this pass. I also asked myself what is so difficult in tarring and maintaining roads that our governments cannot do. If we can fail in this simple task of road maintenance, then how can we expect any institution in Nigeria to work? I hate to say that Nigeria is a failed state. Certainly on that night, I felt my country had failed.

Since 1999, we have been hearing that this road will be reconstructed with five lanes on each side. The Obasanjo regime took us through the charade of concessioning the road to Bi-Courtney, a company that had no track record of road construction. For more than three years, we held our breath and we prayed that this road will be reconstructed. We were later told that the company did not have the capacity to build the road as if we didn’t know that from the beginning. We have also heard rumours that the road will soon be reconstructed and I dare say we do not trust any government anymore. Why must it be just one road that links Lagos with all parts of Nigeria? Yet it is not that people have completely lost their senses and can no longer reason, because I can see three alternatives if we are a serious country. The Lagos-Abeokuta axis can be developed to take some burden off the Lagos-Ibadan road. The old Sagamu-Lagos road through Ikorodu can also be redeveloped to serve as an alternative to this much abused road. The Lagos-Epe Ijebu-Ode road can also be redeveloped thus providing three alternative roads to this hell on earth called Lagos-Ibadan express road.

The initial cause of the chaos on June 30 was the conference at Deeper Life Centre along the express road. This was a Christian conference obviously to praise and worship our Lord Jesus Christ and what should have been an occasion of joy turned to sorrow for many people including elderly people, little children, women who should not be on the road in the midnight and pregnant women some of whom lost their pregnancies as a result of the hardship inflicted on them by a church organisation. It is high time for all the churches and mosques along this highway to get involved in alleviating the pains of our people. I do not see why some of these churches including my own should not be asked to build flyovers carrying their worshippers to and fro their camps onto the highways without impeding the flow of traffic under the flyovers. I know that this can only be done with the permission of the state but some of the church leaders have influence with government and they should use that influence to persuade the government of the need for them to assume their civic responsibilities. We are a very lucky people in this country because Nigerians do not ordinarily rebel against governments but there are enough reasons why people should cry out before it is too late. Our people’s demands on government are very little because most members of the middle class provide the basic needs that should have been provided by government such as security, light, water, education and sometimes roads to their homes and businesses with the effect that government is almost irrelevant. The only reason we don’t have another Agbekoya or a people’s revolt is because apart from the salary earners, very few Nigerians pay taxes except those who live in Lagos and people like myself who have to pay Land Use charge. I hope this current paradigm of do-nothing governments will not endure for too long to the period where as a result of diminishing returns from oil, Nigerians will then be called upon to pay taxes. It is then that our government will be made to realise that democracy is government of the people, by the people but most importantly for the people. Our governments right now are not governments for the people. This is why the most important road in the country will be left unattended to while building in Abuja a 10-lane road running from the airport to the city while totally neglecting the economic and financial centres of the country.