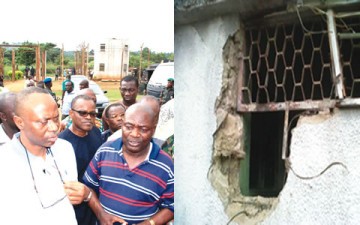 There was pandemonium in the early hours of Sunday when gunmen, numbering about 30, invaded the Olokuta Medium Security Prisons in Akure, Ondo State capital, and set about 175 inmates free.

The bandits, according to eyewitnesses, arrived at the prison premises, which is less than one kilometre away from the headquarters of the 32 Artillery Brigade of the Nigerian Army, also known as Owena Barracks, around 12. 05am, shooting indiscriminately.

The armed men were said to have gained entry into the prison by using dynamite to blow off a section of the walls, after a futile attempt to enter through the main entrance.

A source said one of the warders was hit by the attackers’ bullets, was ordered to release the keys to the cells, and was also forced to set the inmates free.

Our correspondent observed on Sunday afternoon that the walls of the prisons were riddled with bullets, while all the street lights, leading to the prison, were also destroyed.

The state Comptroller of Prisons, Mr. Tunde Olayiwola, who lamented the development, described the attack as unusual.

He expressed the hope that the prisons authority would soon bring the culprits to book.

Olayiwola said, “The incident happened around 12. 05am. The rumour that the attack was masterminded by the dreaded Islamic sect, Boko Haram, is not true.

“The attack is the first of its kind in the history of the prison because the prison has not experienced such an attack since its establishment.”

Meanwhile, our correspondent gathered on Sunday that some of the prisoners, who were set free by the hoodlums, had already been rearrested by security agents in the state.

It was  learnt that  some of the prisoners were picked by the security agents at some of the brothels within the town and neighboring villages near the prison, where some of them were identified and rearrested.

The situation had been brought under control when our correspondent visited the scene on Sunday, as a detachment of security agents had been stationed at the prison.

The Commissioner of Police in the state, Mr. Patrick Dokumor, and some government functionaries, led by the Attorney-General of the state and Commissioner for Justice, Mr. Eyitayo Jegede, SAN, visited the prison.

The Public Relations Officer of the state police Command, Mr. Wole Ogodo, confirmed the attack, adding that the  command had contacted the prison authorities on the issue.

Ogodo said, “The information gathered on the jailbreak is still sketchy. The incident has nothing to do with terrorism, and we call on the people of the state to go about their  normal duties.

“The police will continue to protect lives and properties of the people of the state. All the security agencies within the state are working to track the criminals and all the hoodlums will be brought to book.”