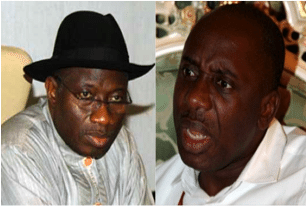 The Romans were wonderful people. They were political conquerors of several territories spanning much of Europe, Africa and Asia Minor. They built roads, created political institutions, as well as spread their science and jurisprudence of public administration across the world.

They were also known for their unlimited capacity to have fun. For this they built giant amphitheatres and arenas, including those meant for gladiators who were a special breed of athletes trained to duel to their deaths, all to the amusement of emperors, senators and nobles of society.

The Nigerian political elite may not have been able to build good roads or institute an enduring governing system like the Romans did. We can at least credit with being able to replicate the martial science of gladiators in their politics. The Nigerian political terrain has been restructured into a huge arena for political gladiators who fatally entertain themselves once in a while.

Presently in the arena are President Goodluck Jonathan and Governor Rotimi Ameachi. It looks like it is going to be a real test of the gladiatorial prowess of a duo quite familiar with each other. It is probably true, as we put it in this clime, that “na who know man de kill am,” which makes the expected outcome to be a little tricky. So when these two political gladiators take to the national arena to test themselves out, it would be naive to see the contest as simply that between David and Goliath per se. In the specific context of this duel, it could actually be one that is squared between a David who knows the Achilles heels of Goliath very well.

It is also the case that, given the reality of our political process which establishes an unusually skewed allocation of state powers and resources to the federal tier within a three-tier structure, it is inconceivable that a contestant carrying the flag of a state can ever hope to withstand the tsunami encased in the federal might which a president wields; thus making any contest pitting a governor against the president a potentially one-sided affair. If you doubt this thesis, go back and check with former governor Timipriye Sylva of the sister-state of Bayelsa for validity.

Ameachi is slightly different because prior to his declaration of animus belli, he had craftily fortified himself with a semi-federal armour secured through his presidency of the Governors’ Forum. He can somehow leverage on this federated platform.

Since all is fair in war, the other side has moved quickly to pull that forum’s carpet from under his feet by breaking the bond that holds the governors’ together, which was Ameachi’s main source of strength. The result was a vicious segmentation of the forum through the creation of a rival and distractive PDP governors’ forum led by Gov. Akpabio, followed by the corrupting of the second term election of Ameachi as NGF president by fielding Governor Jang as a counterforce and ensured he “won” the election via a mathematical summersault that gave victory to the scorer of 16 electoral votes over the one who garnered 19 votes from an electoral population of 36 voters.

In the interim, several proxy combatants have entered the fray. We have witnessed an orchestrated expulsion from the host party, the PDP. We have also seen alliances building up on both sides, culminating in communal altercations and gubernatorial outbursts such as the “Wike,” a serving federal minister, being labelled “too small”. We have heard about how “people that I helped” and in particular, “my fellow Ikwerres” are involved in my “betrayals” like the old civil war “sabos” and traitors.

The matter has brought in unexpected spousal interventions such as we saw when the First Lady physically went to Rivers State on an audacious, if not indecorous, show of force expedition the other day. She arrived with the federal might and ensured it was like a bomb that hit the place. The message?  Don’t mess with my hubby!

The climax of the whole battle appears to be the shameful conflicts of protocol which took place at the Villa last week when security details physically prevented Gov. Ameachi from paying homage to Mr. President. But this was not until after Ameachi and his loyal faction of the Nigeria Governors’ Forum breached protocol themselves by coming late to the occasion due to their preference to first confer as a group before encountering the presidency.

That the ugly incident occurred in the presence of two visiting heads of state added some externality to our otherwise domestic feud. We may then ask: what it is all about? The only plausible answer is that both parties are playing out a hidden script crafted around 2015, irrespective of their strident denials. The president sees Ameachi as a domestic bug that could be used to torpedo his (up till now) stealth scheming for 2015, while Ameachi hopes to ride on the platform of the Governors’ Forum to also attempt what the president craves or something close.

The strange thing about it all is that no one is admitting anything but we can see casualties, political wastage and debris everywhere. It is on record that the aeronautic clipping of Ameachi political wing by grounding his executive jet struck the polity as an act of political intolerance, notwithstanding the official attestation of the aviation authorities that it was all due process within their jurisdiction.

Recently, governor Ameachi has been shouting himself hoarse about his life being in danger. He has gone as far as laying open what looks like a public testament when he said at a church service that certain evil forces were after him. When you add the reported crashing of a truck unto the convoy of his wife soon after, a malevolent picture of a Kudirat Abiola begins to emerge and for a diabolical society like ours, it would not be difficult to draw some conclusions, no matter how outlandish. It is a case of the witch crying overnight and the child dying the following morning. Needless to say that while all these are going on, the business of governance is put in an inevitable recess and to think that we have not achieved much on what initially brought these gentlemen to power, it becomes a national calamity of monumental proportions when they openly fight over possible political advantages in the calculus of a distant 2015.