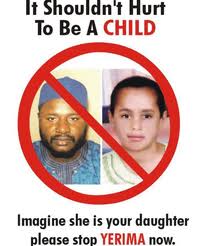 Press release 17th July 2013
GECORN REJECTS AHMED YERIMA’S ARGUMENT FOR CHILD MARRIAGE AND APPEAL TO THE HOR FOR STATE ASSEMBLIES TO UPHOLD THE DELETION OF S 29 (4B) OF THE CONSTIUTION
Gender and Constitution Reform Network (GECORN) is a coalition of women’s rights organisation across Nigeria, advocating for a fair and gender responsive constitution for the Nigerian people.
The constitution of Nigeria is the supreme law of the country, while we hail the constitution review process led by the Senate and the House of Representative.  We reject the argument of Senator Ahmed Yerima that the proposal for the deletion of section 29 (4)(b) which states that “any woman who is married shall be deemed of full age” is at variance with Islamic law.
S 29 of the 1999 Constitution particularly prescribed the procedures for Nigerians who wish to renounce their citizenship.  29 (4)a, defines the character of a Nigerian who is capable of denouncing citizenship and clearly states that such person must be of full age – 18 years and above, which is in line with the Child Rights Act 2003.  Our argument is that S 29 4(b) contradicts, S 29 4(a) and can cause misrepresentation in law and practice.
We ask, is the Senate saying that a 13 years old girl has the mental capacity to renounce her citizenship? Thus, we argue that Senator Ahmed Yerima’s basing his argument solely on child marriage is treacherous and a deliberate attempt to misrepresent the intention of the 1999 constitution.  Such misrepresentation is in our own view what the Senate originally wanted to avoid by the Senate Committee on the Constitution Reform’s proposal and  its initial votes for the deletion of S 29 4(b). Failure to delete 29 4(b) has several negative implications:
(1)  Criminal liability can be placed on under age married girls child.
(2)  An underage married woman can vote and be voted for
(3)  She can also obtain a driver’s license.
(4)  Legitimizing child marriage as evidenced by the past conduct of Senator Ahmed Yerima years back.
We therefore urge the Senate to reconsider its position and call on the House of Representative to show progressive leadership by failing to concur on this provision and others that might retard the progress of this country.
Signed by
Dr Abiola Akiyode-Afolabi , National Coordinator, GECORN.