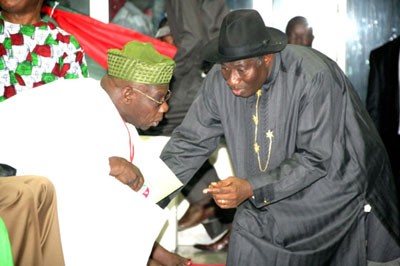 IT was meant to be a private visit. But the President’s trip to Abeokuta, the exciting city that is the capital of Ogun State, to commiserate with his spokesman Dr Reuben Abati on the death of his mother has thrown up many issues. Not because it was out of place for Dr Goodluck Jonathan to be with the one he considers a member of his family on such an occasion. No.

President Jonathan was with former President Olusegun Obasanjo same day. The popular thinking – “the popular is seldom correct”, don’t forget – is that the visit to Obasanjo was the main reason for the President’s presence in Abeokuta. That is neither here nor there. Also unclear is what transpired in the inner room of Obasanjo’s home where the two leaders – father and son, some will insist – poured out their hearts.

There has been no official statement. Dr Jonathan told reporters that it was a mere courtesy call. No more. Editorial Notebook fans and numerous others have been eager to find out details of the meeting. A usually reliable source, who pleaded for anonymity because of what he described as the security implications of the high profile talks, has given some snippets, which he was able to piece together after an encounter with his uncle’s friend who swore that a colleague of his was there. Here is his account, which remains unconfirmed as neither Dr Jonathan nor Chief Obasanjo would take questions:

A flurry of activities proclaims the arrival of a big man. Soldiers are taking positions. A long row of policemen and Civil Defence officials backing the road and domestic staff running around the expansive compound. A convoy of vehicles rumbles up at the gate and Obasanjo comes out to receive his visitor.

Obasanjo (smiling and stretching out his arms): Thank you so much. Please, come inside. I trust all is well o. Because this kind of visit … I don’t know if I’m still qualified for it o.

Jonathan: Haba, baba! You remain my father, any time any day. You’re an elder statesman, the most respected of them all today. And we need to show you respect at all times; we need to consult you on matters of national importance, especially now that our country has some challenges and… . We need your experience to go through it all. And…

Obasanjo cuts in: Thank you; thank you so much. Hmmm…huumm! (He clears his throat). Mr President. You know I won’t deceive you. I will be frank and blunt; you know me for that. It’s just that I’m a good man, I would have asked the guards to shut the gate. But, as a good Christian, I mustn’t do that. If I consider all the attempts made to humiliate me, with the connivance of your people, your party and so on.

Jonathan: I don’t want to waste time Baba. You’re our father; the greatest Nigerian living today, ever patriotic. I should be consulting you everyday, but you know how this job is and you too, you’re a busy man; always moving. I beg you to forget the past and join us to strengthen the party and move it forward to 2015.

Obasanjo: Thank you, oga President. So, you think people like us are still relevant at home in Nigeria? Abi, is it because the 2015 elections are coming? You see, any papa wey no sabi the number of im pikin, na yeye man; I know my children and my children know me. Where were you when I resigned from the board, BOT or whatever you call it? Interestingly, somebody – I won’t mention his name – told me that you would collect the letter and never ask me why. And you did immediately and never asked me why. That means you never wanted me in the first place.

Jonathan: But, baba (the President tries to stop him) you’re … .

Obasanjo (raising his left hand): Please…please; let me talk, oga President. With due respect, you people never wanted me in your party. The man you wanted is now there. So, I wish that my feeling should be respected. I should be allowed to just siddon look. No be so!

Jonathan: Baba, no vex. With due respect, sir, you got it all wrong. I didn’t know you were not happy. I thought you were having too many international engagements and it was getting difficult to cope with the demands of that position. Now, people are saying all sort of things. Lies. Rumours. Nonsense. They say that em…emm…emmm …that I don’t have your support for 2015 and all that. And I tell them that the Baba Obasanjo that I know will always leave everything in the hands of God. I said, ‘no; these are dangerous rumours and I’ll come here to shame our common enemies and show the world that you remain my father.’

Obasanjo (a wry smile on his lips): 2015? I dey laugh o! Who is talking about that? People have been telling me to intervene, that the road to 2015 is full of bumps, that we should save our democracy. Go and face your job o. All those telling you that they know what will happen in 2015, that they will fix it and all that jagbajantics, they’re deceiving you o. You don’t need such people around you. And note that I don’t have any problem with your party o. Please.

Jonathan: Sir, you remain our leader, the head of the PDP family, a big family that is the envy of all others.

Obasanjo cuts in, his face betraying a frown. Please, Mr President. Please, please and please. Me; PDP family? That’s a joke taken too far. Isn’t that strange? All my boys – Oyinlola, Oni and the others – have been pushed out of their positions by those who are bent on hijacking the party for their own selfish ends and with the connivance of your people. In Ogun here, the whole thing is scattered, like a tailor’s legs. And I’m a leader of the party. Leader my foot!

Jonathan: Sir, that is why I’m here. I agree that we have problems in the PDP family. There are issues here in Ogun, Rivers, Adamawa, Ekiti and some other places. Minor issues. I intend to consult all the elders and I’m starting with you as our father.

Obasanjo: I salute your courage. God will help you, but if you want to hear the truth – you know I’ll always be frank with you – these are self-inflicted wounds. Take, for instance, that boy; the one in Port Harcourt. Emmm…Amaechi. What’s his offence? What did he do? They said he refused to give them money. They contrived all manner of wuruwuru and suspended him. Is that a party looking for peace and reconciliation? They said your people dey shout say he must not be Governors’ Forum chairman. They held an election and said 16 is bigger than 19. Haba! Even among thieves, there is honour. A thief knows when he has taken too much and he stops, but this your family, me I no understand o.

Jonathan: Thank you sir. That’s why I have come; so that we can resolve all these outstanding matters and forge ahead as a united, strong and purposeful family, the biggest party in Africa. Sir, you’re a man of foresight. Remember you warned in 2007 about featuring a candidate with k-leg. We’re seeing the result now.

Obasanjo: Really? That was then. The leg don straight now and I’m seeing some people with k-leg warming up for 2015. I won’t say more than that.

Jonathan: Thank you sir. All we want is peace. We need peace. If the party is troubled, the whole country will feel it.

Obasanjo: You see, President. For there to be peace and reconciliation, there must be tolerance. The other day when I spoke about Boko Haram; that it was not something to be handled with kid gloves, your boys descended on me. They said I was talking from both sides of the mouth. I simply suggested a carrot-and-stick approach. Is that not what you’re doing now? Nobody can gag me o; tell them that I, Aremu Okikiola Obasanjo Baba Iyabo, will never be gagged. I will continue to say my own. Anybody who doesn’t like it, dat na im toro.

Jonathan: Thank you, Baba. I take it that all the issues are resolved and that I remain your son and that I can count on your support. I have to leave now.

Obasanjo: Thank you Jonna. You have done well. I need to get ready for some other visitors. Today is a day for visitors and I’m happy to have hosted you, even though you have refused to eat and drink. I know it’s Ramadan but you should have tried a little. All the best.

They shake hands and the President leaves .Some 10 minutes after, some governors drive in to see Obasanjo. There is no ambiguity about their mission. They say the country is adrift and will like Obasanjo to join other elders to pull the brakes on the slide.

Many opinions have been formed on these visits. One, it is said, is about mending fences to realise a personal goal. The other, said critics, is about altruism – stopping the ruckus in Rivers and saving democracy so that Nigeria can get to 2015 and not fulfill the doomsday prophecy of some self-acclaimed necromancers. The governors have since visited former military president Gen. Ibrahim Babangida and former Head of State Gen. Abdulsalami Abubakar. Can you guess who Dr Jonathan’s next host will be?