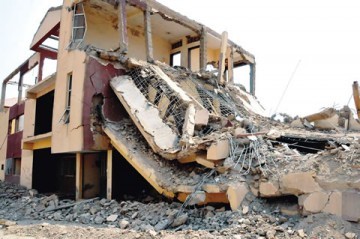 Barely a few hours after seven people were killed last Thursday morning when a three-storey building collapsed in Ebuta Meta, Lagos, another of such buildings also gave way in Kaduna, leaving three people dead and several others, mostly children, injured. And while such occurrences may not be peculiar to Nigeria, it has become so commonplace in our country that experts blame the development not only on the quality of building materials but also on such other factors as population density and soil topography which many builders do not take into consideration before embarking on housing projects.

In other climes buildings don’t just collapse every other day or after a single night of rainfall. It often results from natural disasters. This is so because from the architectural design stage to civil and structural engineering, actual construction and completion of a project efforts are made to ensure that stipulated regulations are strictly adhered to and there are no shortcuts aimed at minimising costs. That unfortunately is not the case in our country today.

While the nation is not in lack of professionals in the building industry, the failure of the regulatory agencies to properly perform their supervisory roles has given way to situations where quacks have taken over with the effect that some land speculators have also become estate developers and construction experts all rolled into one. To compound the situation, inferior materials are often used in erecting buildings whose quality, integrity and lifespan are then greatly compromised.

According to the Nigerian Society of Structural Engineers, “the construction of a building is expected to be managed by qualified professionals including structural engineers, mechanical engineers, electrical engineers, architects, quantity surveyors” among others. In an ideal situation where all these professionals are engaged, there are site engineers and inspectors whose duty it is to ensure that everything is done in accordance with approved plans and standards, “but above all they are expected to pay attention to the use of quality materials”.

It is perhaps for that reason that the Director-General of Standards Organisation of Nigeria (SON), Mr. Joseph Odumodu, recently underlined the need to sensitise block moulders to operate in conformity with the national standards. This followed the revelation by a major stakeholder in the building industry that the prevalence of substandard blocks in the country is a major cause of the incessant collapse of structures. The group executive director, sales and marketing, Dangote Cement Plc, Mr. Knut Ulvmoen, said some block makers do not use the right blend of cement and sand in an attempt to minimise cost and maximise profit.

What the foregoing suggests is that there is a great need for stricter enforcement and a complete overhaul of the nation’s building and construction regulations while there should be adequate sanction for both erring contractors and landlords. A policy should also be put in place whereby any professional connected with a collapsed building should forfeit his/her licence and face the full weight of the law. The land upon which the collapsed building was erected should also be forfeited to government. Buildings marked for demolition by town planning authorities, should be demolished without delay. Unless drastic steps are taken and building codes implemented to the letter, the nation will continue to have these regrettable serial disasters.

However, it is a welcome development that the Governor of Lagos State, Mr. Babatunde Raji Fashola has set up a tribunal of enquiry to look into the incessant collapse of buildings in the state and come up with far-reaching recommendations. Incidentally, the tribunal which has three months to submit its report is still working even as more buildings are collapsing. It is expected that other states where building collapses do occur frequently will borrow a leaf from Lagos. Time has indeed come for the nation to take decisive action to halt the frequent occurrence of building collapse in Nigeria.