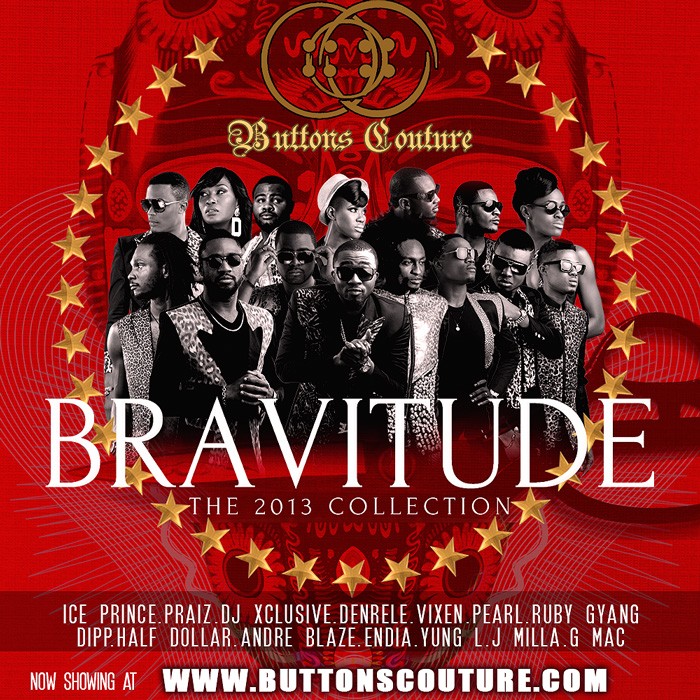 The most anticipated, much-buzzed-about fashion collection titled ‘Bravitude’ from revolutionary fashion house Buttons Couture has finally made its arrival.

The long road to Bravitude started with founder Remi Buttons at her desk in fashion school in the prestigious city of Milan, Italy. Seeking a different creative path from what the industry was expecting from her, she drew her inspiration from animal and decided on a theme that would reflect the element of bravery that it takes to succeed in the jungle of life.It was love at first sight. Despite the fact that print was a different path from the ‘bling’ that everyone associated her with, Remi was not afraid to tread and take over new territories. According to her, “The courage, the drive, the heart, the fearlessness I gathered to embark on this journey is what inspired me to come up with the name Bravitude; I had five names but all revolved around the word Brave”.

Working with some of Nigeria’s biggest celebrities whom she felt embodied the spirit of the collection, Remi Buttons was able to craft a collection of statement pieces, with each piece being inspired by and named after its celebrity model. For each piece of the Bravitude collection, Remi Buttons incorporated a special, admirable characteristic drawn from the celebrity model. With ambassadors such as Ice Prince, Andre Blaze, Praiz, Denrele, Grip Boiz, Pearl, Ruby, Vixen, Yung L, J Milla, G Mac, Dipp, Jekwu, Lee, Endia, and DJ Xclusive, the collection could only turn out as diverse and awe-inspiring.

In preparation for the launch, Buttons Couture embarked on what is easily the biggest and most talked-about campaign in Nigerian fashion history titled, The Road to Bravitude. A series of videos and competitions generated so much buzz and discussion which left the internet community reeling and saw the Bravitude hashtag become a trending topic for weeks. “I wanted as many people as possible to participate in the Bravitude experience, be a part of it. We had a lot of social media engagement; loads of cash prizes were won”.

This was not to be the last: determined to make it an unforgettable experience, after releasing a series of webisodes(leading up to today), Remi Buttons also put out the beautifully composed ‘Bravitude Anthem’ featuring performances by the highly talented trio, Grip Boiz and critically acclaimed songstress Ruby. With the most innovative and daring campaign in Nigerian fashion to date, Buttons Couture has made its presence felt in the most creative way and – virtually assuring its place as the stand out fashion brand of the year.

“I would like to use this opportunity to thank all the models, my awesome team who worked tirelessly, the public and the media for all the support. This journey would have been incomplete and rather impossible without it. Thank you, thank you, thank you.” – Remi Buttons.

#Bravitude2013 by Remi Buttons for Buttons Couture is now officially live at: www.buttonscouture.com

We would also use this medium to thank specially, for supporting the success of this project with from the scratch!

Kindly Publish and Share this on your cherished Platforms.

Connect with Us, Join the #Bravitude2013 Conversation