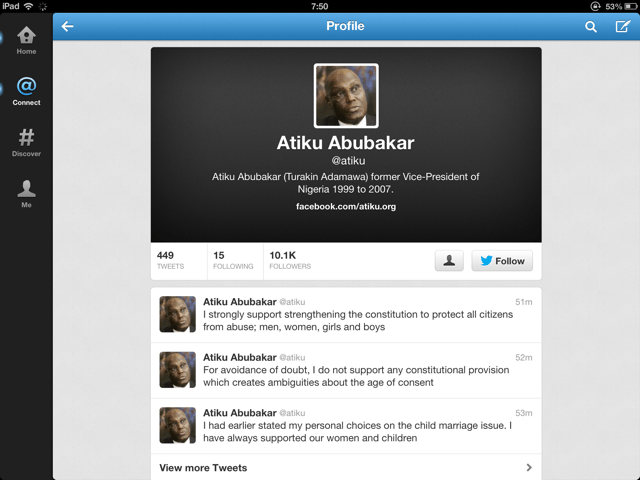 Former Vice-President of Nigeria from 1999 to 2007 Turakin Adamawa, Atiku Abubakar has added his voice to the raging controversy around the Nigerian Senate’s subtle approval for child marriage. Atiku expressed his unreserved opinion via his Twitter page @atiku. Some of his tweets on the issue go thus:

“As a father, I’ve never given out my daughters in marriage before university graduation. It’s a personal decision,” he went further to tweet, “I had earlier stated my personal choices on the child marriage issue. I have always supported our women and children.” The former Vice President then went ahead to take on the Senate S.29 voting controversy directly by tweeting, “For avoidance of doubt, I do not support any constitutional provision which creates ambiguities about the age of consent” and concluded by writing “I strongly support strengthening the constitution to protect all citizens from abuse; men, women, girls and boys”