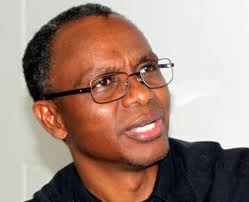 Former Minister of the Federal Capital Territory, Mallam  Nasir  El-Rufai, on Sunday boosted that the All Progressives Congress would  triumph over the ruling Peoples  Democratic Party  in the 2015 general elections, especially if the conduct of the polls would be free and fair.

He spoke in Zaria, Kaduna State at an event organised by the Movement for Better Future.

El-Rufai, who is the APC Deputy National Secretary, also noted that the PDP had failed the nation with its unfulfilled promises.

He described President Goodluck Jonathan’s administration as one that could not tackle the security challenges in the country.

According to him, the country’s problems revolve around the operators.

He said, “I do not think 2015 is around the corner, it is two years from now. However, the APC is capable of kicking the PDP out of power. The PDP has ruled the country, and it has failed to live up to its promises. The PDP government has not provided us with basic outlets of security and prosperity.

“We believe that in a fair and free election, APC is going to defeat the PDP. All we are doing now is to come together, so that we can organise ourselves in order to put in place a system to protect our votes. We are taking this measure knowing that PDP does not win elections.

“Members of the party know how to write results that they want, and we have to think of a way to protect our votes. That is what we are working on.”

He added, “I think the impact of APC can be gauged from the performance of the states that are already being controlled by the parties that constitute APC.

“You cannot compare the performances of governors Rauf Aregbesola and Babatunde Fashola, for instance, with some of those PDP governors that only know how to get allocations and share. So we can be confident that Nigerians can see the difference between a performing government and one not doing anything.”

“I do not know why we are changing our own. The problem of Nigeria is not the single term, it is not the constitution. It is the quality of people in public office.

“When you are not prepared for a job, you start preparing what to do when you get to the office. But if you are really prepared, the four-year period is enough for you to show that you can perform.”