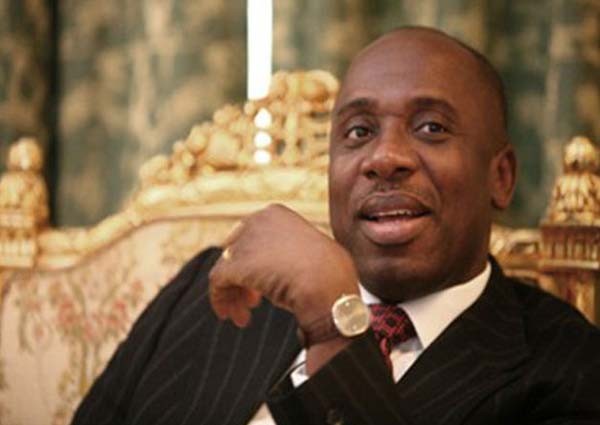 Rivers State Governor Rotimi Amaechi  has accused President Goodluck Jonathan of turning the Peoples Democratic Party into a “one-man show” and of condoning “impunity and authoritarianism” in an effort to ensure re-election in 2015.

Amaechi, in an interview he granted theFinancial Times of London, added that the President and his wife, Patience, were bent on removing him from office.

He traced his travails to a perceived fear in the Presidency  that whoever  was in charge of  the Nigeria Governor’s Forum had the capacity to influence  the presidential election in 2015.

The embattled governor said, “There is this fear in the Presidential Villa that whoever chairs the governors’ forum will influence the presidential election,” Amaechi  told FT in Port Harcourt on Tuesday.

In a report posted by FT on Sunday, he alleged that  “what has happened has been engineered to the point where the President and his wife are trying to remove me from office.”

“We are seeing  an absence of law and order that can breed anarchy. It seems those at Federal Government level are not interested in democracy, but impunity and authoritarianism. The President needs to check this,”  the governor added.

Amaechi  also told  the FT that he had not decided on his plans for 2015. He said that efforts by some in the PDP leadership to claim that he had lost the governors’ forum vote, despite him obtaining 19 votes to his challenger’s (Jonah Jang of Plateau State) 16, was a concerning sign ahead of  2015.

But spokesman for the President, Reuben Abati,   denied that Jonathan  and his wife  were in any way involved in  Amaechi’s travails.

“This is all local Rivers politics,”  Abati  said. “It’s convenient to drag the President into this, but it is not true. All these allegations are baseless.”

Meanwhile, the  Rivers State Police Command and the state government on Sunday traded words on the whereabouts of the the Majority Leader of the  House of Assembly, Mr. Chidi Lloyd.

Lloyd was  last week  declared wanted by the police command  a few hours before  Force  headquarters in Abuja invited him  for  allegedly attacking another lawmaker with a  mace during  the free-for-all in the Assembly. The fracas was caused by an attempt by five lawmakers loyal  to the Minister of State for Education, Nyesom Wike  to   unseat the speaker.

While the state government claimed that the Police  knew where to find the embattled lawmaker, the spokesperson for the command, said they would not have declared him wanted if they knew where to locate him.

Chief of Staff,  Government House,  Port Harcourt, Mr. Tony Okocha, who accused the police of bias in handling the crisis, said   they (police) were free to search the Government House for Lloyd.

He said, “Lloyd is not in Government House. He has been receiving treatment since the incident in the House of Assembly. I am sure that the police know where he is. You can see how one-sided they (police) are.

“Even when Evans Bipi was the first to hit Chidi Lloyd, the only person declared wanted is Lloyd. We saw a video clip where Bipi was boasting that he hit Chidi Lloyd. We also heard how he dealt Ngo, a lawmaker in the House a blow.

“We are shocked that nobody is inviting them (Bipi and four other anti-Rotimi Amaechi lawmakers) for interrogation. In the matter, there must be what we call cause and effect relationship.  Bipi was the first to hit Lloyd before he (Lloyd) retaliated.”

Okocha however  said the  government was ready to embrace anything that would ensure that peace reigned in  the state.

The State Police Public Relations Officer, Mrs. Angela Agabe, however,  said it was wrong for any person to insinuate that the police knew the whereabouts of the Majority Leader.

Agabe, who spoke with The PUNCH said that the police were not biased  in  handling of the matter.

“If the police knew where Chidi Lloyd is, they (police) would not have declared him wanted. The search for the lawmaker over the assault on a fellow member   is still on,” she explained.

The PDP   in  the state had earlier  accused   Governor Amaechi of hiding   Lloyd in the  Government House.

A statement  by the Special Adviser to the state party Chairman, Mr. Jerry Needam,   called on the   government to hand over Lloyd to the police for investigation.

“The Rivers State Governor  knows where  Lloyd, declared wanted by the police is hiding. We call on the  state government to hand  him over to the police for investigation,” Needam said.

Also on Sunday,  the   Action Congress of Nigeria accused the PDP of being unrelenting in its  determination to overheat the polity and set the country on fire .

In a statement in Lagos on Sunday by its National Publicity Secretary, Alhaji Lai Mohammed, the  ACN said it was left with no choice than to reach that conclusion after a faction of Rivers PDP reportedly loyal to President  Jonathan expelled Amaechi, at a time all people of goodwill were calling for a resolution of the state’s lingering crisis.

It warned that  since   PDP ‘s sole interest was  power and  not  the responsibility that goes with it,  it must be checked through all constitutional means before it plunges the country into  chaos.

The ACN  said one of the reasons  Amaechi had been targeted by his “all-powerful enemies”, who have used national institutions – including the police – against him, was  his strenuous defence of the NGF.