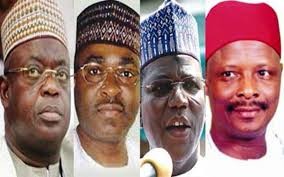 The battle cry from the North over the 2015 presidential seat is beginning to tone down. The issue has moved from grandstanding, even belligerence, to reasoned and tempered responses. The wise ones among them are beginning to rely less on threat and the absolute confidence that goes with it.

Before now, the North has been talking tough over the 2015 presidential elections. The region holds that power must return to it. They do not see the possibility of a return for the incumbent Southern president, Goodluck Jonathan.

Dr. Muazu Babangida Aliyu, Governor of Niger State and Chairman of Northern Governors Forum, has been the arrowhead of the northern agitation. He blew the lid when he told the world that Jonathan signed a pact with northern leaders to spend only one term in office. Based on the agreement, Aliyu holds that Jonathan has no moral authority to seek a second term in office.

The argument is still raging. It has sharply pitted the north against Jonathan’s kinsmen from the South. Flaunting the oil reserves that lie in abundance in their region, Jonathan’s brothers have threatened that they would strangulate Nigeria economically if their brother is not given the chance to return for a second term. The Ijaw irredentists are not only asking for the ticket of the Peoples Democratic Party (PDP) for Jonathan, they also insist that he must win the 2015 presidential election. What the Ijaw position seems to suggest is that winning election is not a matter of the ballot. It can be arranged to achieve a predetermined result. Were it not so, they would have made some allowance for an outcome that may not be in line with their desired objective.

While Niger Delta warlords have been parading their strength, the north and its collaborators have been working hard to neutralize whatever powers that Jonathan and his kinsmen may have. The biggest obstacle on their way remains the factor of incumbency. Efforts have been made to seize the PDP from the president. But all the moves have, so far, been ineffective. The enormous powers of the Nigerian president have been effectively deployed to neutralize and weaken the opposition elements.

Having failed to wrest PDP from the president, a new coalition called APC (All Progressives Congress) has emerged. The rainbow coalition is peopled by disparate entities whose political leanings are diametrically opposed to one another. But they are trying to work together in order to oust a common opponent. Yet there is a snag in all this. The north may be genuinely committed to the idea of a northern president in 2015. But we cannot say the same thing of the South West bloc within the APC. The APC agenda, it would seem, is the defeat of a Jonathan arrangement represented by PDP. But there are many who believe that the Yoruba may not be committed to this idea, after all.

The suspicion is that the South West inclination towards the APC is being done for purposes of political relevance. An APC coalition with the Yoruba as major stakeholders would interest those who feel that the Yoruba political bloc is not well represented in the present PDP government at the centre. The APC is therefore seen as a counterpoise to the inadequacy that the Yoruba feel at moment. That, on the surface, appears to be the attraction the Yoruba have for APC.

But then, it is believed in some quarters that the commitment of the Yoruba to the APC agenda may not go beyond the attractions of the moment. The suspicion is that power – sharing within the coalition will rock the boat. A situation where the Yoruba will not feel adequately rewarded in the APC is being envisaged. Should such a situation arise, as it is expected to, then the Yoruba will have cause to gravitate towards the president and his PDP. And since the president also needs the Yoruba to ensure a resounding victory in 2015, he will readily go into negotiation with them with a view to ensuring that their interest is well represented in the new government.

Essentially then, the Yoruba are playing smart. They want to be the beautiful bride that is the toast of potential suitors. Now, APC appears to have taken possession of this bride. But there is the likelihood that the bride would bolt away when a new suitor comes with a juicier offer. Should this happen, the Yoruba would desert the APC, leaving a shadow of its old self. This is a possible scenario.

The North which is working with the South West to wrest power from Jonathan may not be completely unaware of the possibility of switch on the part of the Yoruba. That may explain why they are beginning to soft pedal. Just a few days ago, for instance, Governor Aliyu who has given Jonathan so much cause to worry had cause to shift his position on 2015 presidency. Now, he has said that the North is ready to negotiate over the 2015 exercise to ensure that its interest is protected. It is therefore no longer a matter of life and death. It is also not a do or die affair. Negotiation is gradually creeping into the discourse. The initial fire and brimstone may have burnt itself out. What we have now is a call to reason.

The new tone of the North as demonstrated by Aliyu may well be the wisest way to negotiate itself back to power. The North may decide now to give a tacit support to Jonathan knowing full well that he cannot remain in office beyond 2019. The idea will be to make Jonathan to be favourably disposed to having a Northerner take over from him.

It makes sense for the North to be less antagonistic to Jonathan. The posture of belligerence and confrontation may drive the president into taking steps that may not favour the North as he prepares to leave office in 2019.

The North understands, for instance, that the Igbo are still jostling for the presidency. As a political bloc, the Igbo are solidly behind Jonathan. They are giving him their support, whatever it is worth. There is a lot of sense in the Igbo position. A people must be seen to belong somewhere. The Igbo have chosen where they want to be in 2015. They should therefore be prepared to swim or sink with their decision.

As ardent supporters of Jonathan, the Igbo are likely to ask to be compensated. It is possible to get the president to prepare grounds for the emergence of an Igbo president after his second tenure.

The North may be working towards frustrating such a possibility. That is where negotiation comes in. After all, it is better to play the politics of negotiation rather than one of confrontation.

The likes of Sule Lamido, the Governor of Jigawa State, may be taking consolation in their thinking that Jonathan, even with a PDP ticket, may not win the presidency after all. But we know that politics is not about wishful thinking. It is a practical exercise. What Lamido and others like him may be doing is to talk tough.

Of course tough talk matters in politics. It is capable of destabilizing the lily-livered. So, the Lamidos of this world can go ahead to intimidate Jonathan. But I doubt if it will work in this instance. Jonathan’s quest is a serious one. It is not about him alone. The entire Ijaw, regardless of their lean number, is interested in the quest. It is therefore not something that can be wished away. I then submit that negotiation which the likes of Babangida Aliyu have chosen to opt for will be a better strategy for the North. Grandstanding and tough talk will achieve nothing.