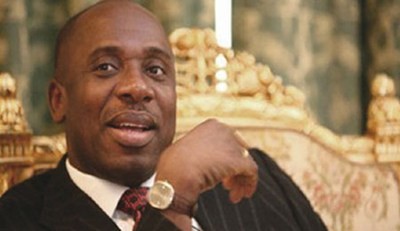 The National Caucus of the ruling PDP has explained that the suspension of Governor Rotimi Amaechi of Rivers state, southwest Nigeria, was not lifted because of a pending case challenging the action.

The party organ gave the explanation late on Tuesday after a meeting, presided over by President Goodluck Jonathan at the Banquet Hall of the Presidential Villa, Abuja.

In an interview with State House correspondents after the closed-door meeting which ended at about 11 p.m., the Chairman of the PDP Governors Forum, Mr Godswill Akpabio of Akwa Ibom, said the body was briefed on Amaechi’s suspension.

Akpabio explained that reversing Amaechi’s suspension from the party would amount to over-reaching the decision of a competent court, sitting on the case challenging the action.

He said that it was easy for the National Working Committee (NWC) to lift the suspension of Sokoto Governor Aliyu Wamakko because the matter was not in court.

“The PDP National Caucus was fully briefed on all issues pertaining to the party.

“We made an appeal to the NWC to look at the suspension but the one of the Rivers State Governor is subjudice because he has gone to court.

“The one of Sokoto did not go to court and so the suspension was lifted,” Akpabio said.

Amaechi was suspended on 27 May over allegations concerning his refusal to heed the party’s instruction to reinstate the elected chairman of Obio/Akpor Local Government Council in Rivers.

Wamakko, who was suspended on June 5 for alleged serial disobedience to party authority, was recalled by the party this week.

Akpabio said that the meeting also deliberated on the lingering crisis within the party and agreed that a high-powered team headed by the president should immediately embark on reconciliation.

He said the team would consult with aggrieved members to bring them back to the fold.

He said that the PDP at its NEC meeting on Thursday, considered the report by INEC which faulted the election of some members of the National Working Committee.

He refuted media reports that President Jonathan had ordered that the PDP National Chairman, Alhaji Bamanga Tukur, and other executive members should resign.

“I believe that he (Tukur) is the National Chairman.

“In fact, NEC will look at INEC’s report that some national officers were not properly elected.

“We will look at that as a party. I don’t see any problem with the national chairman.”

Akpabio also disclosed that the meeting had set up a special committee to look at the guidelines that would be presented at the NEC meeting on Thursday for approval.

Meanwhile, the fraction Nigerian Governors’ Forum, NGF, on Tuesday failed in its bid to stall hearing of a suit challenging its legitimacy and seeking its de-registration.

A Federal High Court siting in Abuja and presided over by Justice Adeniyi Ademola, refused to entertain NGF’s application for a stay of proceedings in the matter.

The forum’s lawyer, Mr. Okunade Olorundare, a senior advocate of Nigeria, had applied for his preliminary objection to be heard first before the substantive matter or alternatively, for his application for stay of proceedings pending appeal to be heard first. These were rejected by the court in a ruling.

The court had earlier fixed the hearing of all pending applications, particularly the preliminary objection and originating summons, for Tuesday.

Parties were expected to argue both applications, but Olorundare and Mr. Nasiru Tijani, who represented the Corporate Affairs Commission, CAC, objected and insisted that the court must first hear their objections.

Olorundare further told the court that he had filed an application before the court seeking a stay of its proceedings pending the determination an appeal he filed.

The appeal was against the court’s decision on 29 April to hear the substantive suit together with the defendants’ preliminary objection.

He urged the court to either hear his preliminary objection first or hear his application for stay.

Mr. Tijani Ali Danjuma, the Northern Coordinator of Network for Defence of Democracy and Good Governance, NDDGG, had taken the NGF and the CAC before the court claiming that the governor’s body was erroneously registered by the CAC and wants the court to de-register the NGF.

His lawyer, Mr. Tubotamuno Dick in the course of Tuesday’s proceedings, described Olorundare’s argument as part of the defendants’ antics to frustrate the prompt hearing of the case.

He argued that the court’s decision to hear both the substantive suit with the objection was in line with the provision of Order 29 of the court’s Civil Procedure Rules and urged the court to discountenance the defendants’ argument and proceed to hear the case the way it had planned.

The court held that the decision to hear the applications together was informed by the provision of Order 29 of the Federal High Court Civil Procedure Rules and maintained that Olorundare’s argument, as well as that of the CAC, were misconceived and calculated to stall the court’s business for the day.

Subsequently, the matter was adjourned to 4th July, for hearing of the defendants’ objection with the substantive matter

Ali Danjuma, the laintiff, also wants the court to determine among other issues, whether an “office” can have fundamental human rights as provided under Chapter Four of the Constitution, particularly in relation to the right to freedom of association as provided under Section 40 for it (the office of governor) to qualify as Trustee under Section 592 of the Company and Allied Matters Act (CAMA) 2004 and for it to be registered as an association under Part C of CAMA.