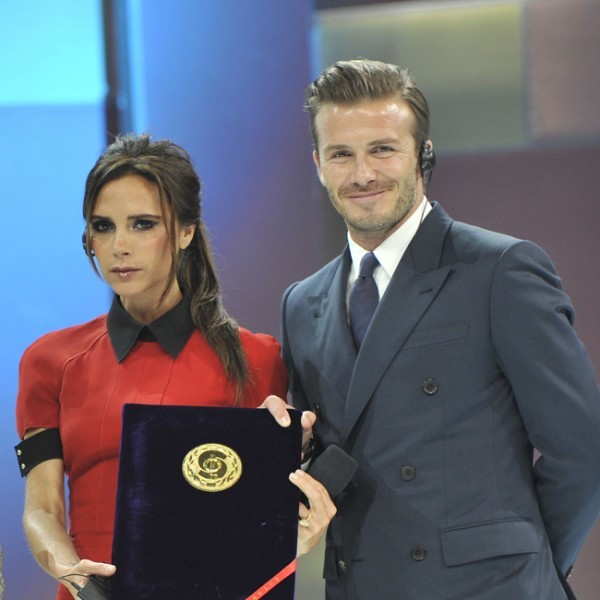 Victoria Beckham thinks her husband David Beckham would be perfect as James Bond and could be the next 007 when Daniel Craig leaves the spy role.

While David – who retired from soccer last month – insists he has no plans to become an actor, Victoria thinks her spouse of almost 14 years is the perfect man to take over as 007 when Daniel Craig steps away from the role. David said: ‘I have some friends who are actors, Tom Cruise is a very good friend of ours. But I don’t think I have any plans to become an actor. I’m not sure I’d be very good at it.’

During a joint interview with Chinese news station CCTV, Victoria interrupted to say: ‘I think you would be really good at acting.’ After turning to the interviewer and saying: ‘Don’t you think he’d be good at acting? I think you’d be great!’, she added: ‘I think he should be James Bond! He’d be a good James Bond!’

Victoria, 39, also admitted juggling her family life and successful fashion career is a struggle but insisted David and their four children, sons Brooklyn, 14, Romeo, 10, and Cruz, eight, and 22-month-old daughter Harper, are the most important people in her life.

When asked whether they discuss fashion or football over the dinner table, Victoria said: ‘I’d say we talk about both, wouldn’t you?’

Before David added: ‘I would say we talk about football more.’ Victoria then quipped: ‘What am I gonna say? There’s three boys! And Harper can’t talk that much … her words are limited!’

Meanwhile, despite her career as a fashion designer, Victoria revealed David, 38, is responsible for his own stylish ensembles. She said: ‘I can’t take the credit for that. David has a very good sense of style.

‘He can’t go wrong, he looks good in everything.’