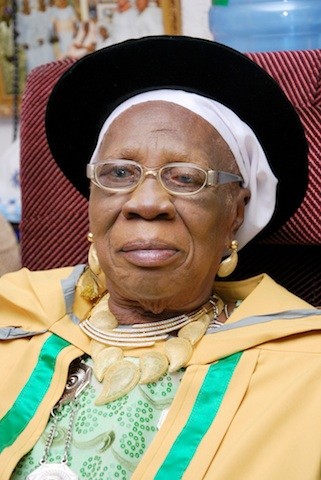 It was a shock they never prepared for. Gathering at the home of their late leader,  Alhaja Abibatu Mogaji, who until her death on June 14 at the age of 97, was the President-General, Association of Nigerian Market Women and Men, majority of them had only come to mourn their leader, for whom the family was holding the eighth-day fidau, a religious ritual for departed Muslims.

Like so many dignitaries and others from different spectrums of the society, who had converged on the late Mogaji’s Alausa, Ikeja home to take part in the eighth-day remembrance prayers for the deceased, the least the traders had expected was that on that Sunday, they would get a new leader.

But they had not taken into reckoning that Mogaji’s most famous son and former Lagos State governor, Senator Bola Tinubu, could have other design. And that was what he did as shortly after the fidau prayers, he met with the traders, ostensibly to thank them for honouring his mother with their presence. After a short speech, he dropped the bombshell to the chagrin of the traders: his daughter, Mrs. Folashade Tinubu-Ojo, will replace her grandmother as President-General, Association of Nigerian Market Women and Men.  Majority of them concealed the shock with muted approval.

Though Tinubu-Ojo, wife of a member of the Lagos State House of Assembly, could not hide her joy at the pronouncement, as she danced in appreciation, most leaders of market associations present, who had been expecting that they would have a say in who would lead them after the demise of Mogaji, grumbled at the appointment.

Worried about the development which it said was against democratic ethos, the Lagos State chapter of the Peoples Democratic Party (PDP) called on Tinubu to rescind the decision.
The party in a statement signed by its Publicity Secretary, Mr. Taofik Gani, noted that democratic process should be allowed to usher in a new leader as against the dictatorial style being displayed by Tinubu, who is also the national leader of the ruling Action Congress of Nigeria (ACN) in Lagos State.

“The much touted democrat should allow the simple tenets of democracy to prevail in the selection of a new leader for the market women,” the statement said.

The main opposition party in the state also faulted the decision to name Tinubu-Ojo as the successor to her grandmother on the grounds that she is not a full time trader, adding: “There is no cogent evidence that his nominee and daughter is a full time market woman.”

According to the party, such a development is dangerous and must be reversed.
“This new development portends great danger for our democracy and indeed Lagos integrity. We are thus calling on the state Governor, Babatunde Raji Fashola, not to sit on the fence at this auspicious time,” the party added.

The PDP therefore urged Fashola to exhibit control in governance, especially when Tinubu’s interests conflict with the public interests. “He (Fashola) must see to it that the process leading to the emergence of a market leader and any other leadership in the state is transparent, liberal and credible,” PDP said.

THISDAY reliably gathered that a meeting of leaders of markets slated to hold Tuesday to discuss the matter and decide on how to respond to Tinubu’s imposition of his daughter as the leader of traders in the state did not hold as scheduled. However, no reason was given for the cancellation of the meeting.

But a market leader at Ijaiye-Ojokoro area who would not want his name in print, has expressed doubts over the possibility of a reversal of the decision on the grounds that Tinubu and the Lagos State Government were behind the imposition of Tinubu-Ojo as their leader.

The position is considered relevant in Lagos politics as the occupant of the office wields considerable influence among traders, who constitute a significant portion of the electorate, and could exercise that influence to mobilise votes for any party of choice during elections.