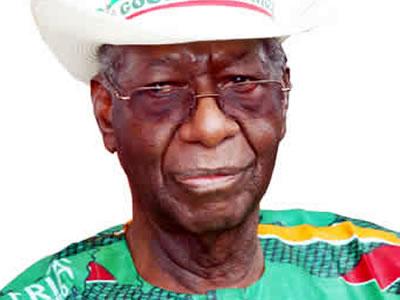 The full implication of the recently truncated Nigerian Governor’s Forum election result was not lost on the powers that be even though many less politically inclined Nigerians were unable to grasp it. It clearly indicated that one cannot rely on the governors (or any delegates from their states) to ensure that the current President will scale through the 2015 primaries. Indeed it is now obvious that should primaries be held today with the level of transparency with which it was conducted the last time, the President may not win. The overwhelming support received from the North in 2011 cannot be guaranteed this time around and without that, the outcome of the election is most unlikely to be successful.

No amount of magic can change that and Anenih (Mr. Fix It ) is not willing to put it to the test. In fact like some sort of political wizard he would rather wave his magic wand and make the whole process disappear altogether. At the PDP democracy day dinner, he announced his new strategy to ensure that the incumbent president makes it to the polls. He stated that since the primaries tend to bring so much acrimony within the party, there is no need to continue with that process at all. Instead all incumbents should be given automatic tickets to contest as long as they have performed creditably though it is not clear who will be the judge of that.

To ensure that the new process (or “non process” as the case may be) does not appear to be partial to the president alone, he has thrown in all PDP governors, senators and house members for good measure. Most of the PDP governors are in their second term so they may not benefit from this generous gesture but then it was not designed for them anyway. However for the senators and house members whose local governments have an internal rotating system, this could create a problem. It means that there will be no primaries to ensure a change of candidate and there will be discontent when only one area takes up 8 years instead of the 4 years allocated to it.

Nevertheless, as important as that may seem to the local government areas and their candidates in waiting, it is a minor issue in the grand scale of things; Anenih’s suggestion has much graver implications. Firstly it is fundamentally undemocratic and could create even more bad blood than a lost election would. During the last primaries, Atiku was floored; there is no doubt about that. He was outwitted, he was voted out and the process was indisputably transparent. Indeed there was behind the scene politicking and possibly even bribing by one or both sides, but the crucial process was the one which we all witnessed live as it happened and that was the process that gave the president’s nomination credibility.

Even Nigerians in the diaspora watched it live and were impressed that despite all the negative impressions one had about the PDP, it undoubtedly has a strong credible structure and a clear respect for democratic processes. No one could reasonably deny that and no other party at that time could boast of the same. It is one of the reasons that despite huge mistrust of the specific candidates by certain groups, Nigerians generally have only been able to entrust the management of the country in to the hands of the PDP.

But that is not even all; there are other implications. The PDP constitution clearly makes provisions for the selection process of a candidate for the post of the President of Nigeria.  Under Chapter VIII, section 50 (1) states that the National Executive Committee (NEC) shall be responsible for formulating guidelines and regulations for the nomination of candidates for public office. Section 50 (2) goes further to prescribe the manner in which the NEC can select candidates for elective office and in subsection (3) it states that “In the conduct of primaries for the party’s candidate for the post of the President of the Federal Republic of Nigeria, the primary shall be held at the National Convention of the party specially convened for that purpose”. What this clearly means is that there must be a National Convention specifically for the purpose of selecting the president and primaries must be held.

The Independent National Electoral Commission (INEC) has a duty to ensure that every party upholds the provisions of its constitution and all changes to the constitution must be communicated to INEC. In the event of a breach, INEC can intervene; alternatively or even in addition the aggrieved parties can go to court. In the past, INEC has accepted candidates from other parties such as ACN and CPC without a clear democratic process and may therefore lack the moral standing to judge the PDP unfavourably. However INEC has recently demonstrated that they intend to take their regulatory responsibility more seriously. The question is do they have the courage to disqualify the incumbent president if he is produced through a flawed process or one that is a subject of judicial action? For that matter for all their recent “huffing and puffing” does even the Judiciary have that courage? Most likely not and this is probably what Anenih is banking on if he has even considered the legal implication of his suggestion at all.

What he definitely seems not to have considered accurately is the reaction of the public. The recent impunity with which the PDP governors truncated a democratic process involving governors from all parties left Nigerians reeling in shock especially after a tape was televised showing clearly that there was indeed a process despite the denials from three governors two of whom were from the PDP. Whether they accept it or not, the PDP was tainted by that incident more so as Governor Amaechi was suspended from the party two days later.  Many people felt and rightly so too that it was an indication of what could happen if the PDP loses the election in 2015.

Despite their initial shock and horror however there has been no strong reaction from the people other than denouncements on the social media and commentator’s debates on a couple of tv programmes. Hence Anenih and probably other presidential advisers appear to have concluded that the exercise was a successful one and no amount of impunity, so long as it remains a (PDP) “family affair” will ever attract any repercussions. But what reaction do they need before they get the message that they are skating on very thin ice as far as the public are concerned?

Anenih stated in a press conference a day later, that his suggestion was well received by party members. Of course it would be, do they dare say otherwise to him or to the president? Which party members did they ask? Did they ask the ones who might have wanted to stand for the primary elections come 2015? Did they ask former Vice president Atiku or Governor Babangida Aliyu? The real question they should be asking is what do Nigerians out there think? Will they still regard PDP as the only party with a democratic process?

In 2011, this may not have been much of an issue but with the advent of APC, it becomes a key factor. They may tell themselves that it does not matter after all if push comes to shove, they can simply rig the election. But if rigging was that easy, PDP would not have lost the entire South West nor would they have lost Imo state in 2011 and Anambra state in 2010. Rigging may influence a situation where the number of votes on either side are close, but make no mistake about it; you cannot rig a largely unpopular candidate into power even in Nigeria. Furthermore as democracy becomes more entrenched and the people become more aware of the process, rigging becomes that much more difficult. There were less successful cases of rigging in 2011 than in previous elections and there will be even less in 2015.

How can the incumbent president overcome the present challenge because indeed there is one? He cannot win an election in the North and he cannot retain his presidential role without the Northern vote. His main problem is not so much the primaries as such, but the general elections. In the primaries he can control the South East, South South and even the South West if not the North. With that and a stroke of luck, he can still win if he gets a couple of Northern states from the middle belt.

In the actual elections however, the battle will be fiercer. APC owns the South West let’s face it and he only got their support the last time because Tinubu helped him. Will he help him again? Well after his humiliation in the dock shortly after the election, it is most doubtful but anything can happen in politics.  It is more likely that this time the APC will field a credible candidate for the presidency and they will do everything possible to make him win. There will be no room for the theatrics they displayed in 2011 which the PDP benefitted from. The far North is definitely out of it so the South East minus Imo state and South South minus Edo state are his best bet. Admittedly the picture is grim whichever way you look at it but avoiding the primaries is not the solution.

If one is afraid to face the primaries, how on earth can they handle the elections proper? The “advisers”, need to take some advice themselves because if anyone loses this election for the president, it will be them. We still have eighteen months to go before the next elections and so much can be achieved in that time. Exceptional performance will secure the votes of most Nigerians regardless of their ethnic group. Electric power is crucial and all hands must be on deck to deliver it. So far it has been a colossal failure and Nigerians will not be convinced that there is uninterrupted power until they can press a switch and the light comes on without going off again. Ten more CNN interviews will not do the trick and Amanpour will eventually lose her fascination for the subject.

Impunity and a lack of respect for democracy can only put people’s backs up and will completely erode their already waning trust. Constant abuse emanating from the president’s advisers such as Okupe and Abati will most definitely not endear the public to the PDP or their candidate. At the end of the day, people will vote and their votes will count; wise politicians will do whatever it takes to secure them!