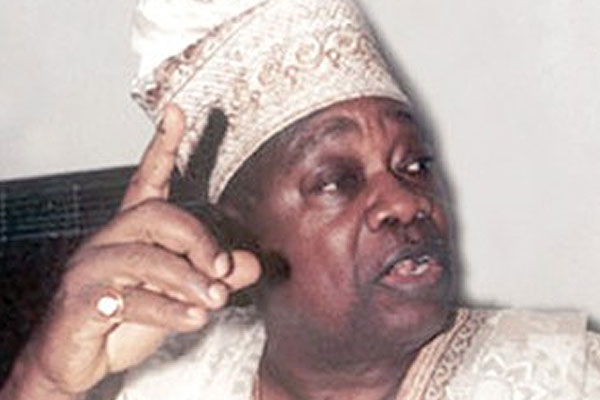 My father was not a perfect man; he had his flaws ad his excesses, but he had one thing that many lack today – compassion. They say every rich man in Nigeria has a story; perhaps, this is true, but his is one that anybody at all in Abeokuta can confirm. My father sold firewood to make ends meet, he beat drums and sang at corners, he borrowed textbooks because his parents couldn’t afford to buy, committed them to memory, then went on to excel beyond his peers.

In Yoruba language, ‘Kashimawo’ can be roughly translated as ‘let’s wait and see’; he was thus named because dozens of children born to his father died before him, and his parents were unsure as to whether or not he would survive. My father was a child of destiny; the same way that he brought relief and joy to his parents, was the same way in which he touched lives and put smiles on the faces of thousands. Moshood Kashimawo Olawale Abiola was a rare kind; a fine blend of human flaws and divine compassion.

My father was not without his flaws; with twenty-seven women listed in his will, and about a dozen others forming an association, it is very safe to say that he over-indulged especially where women were concerned. However, if he hadn’t married so many, I definitely would not have been born, and he could have paid lip-service and resorted to hypocrisy like many do today by denying these women and refusing to take responsibility, but my father was too honourable for that – he took care of the children they brought forth, even when he knew fully well that many of them weren’t his.

In Islam, it is a heinous sin to severe the bond of kinship – there was no relative, no matter how distant, that father ever turned away. Not one even remotely related to the Abiola clan could ever complain of not being granted audience.  That some would betray his memory now and go cap in hand to beg for alms from the same people who betrayed him is a real shame indeed – in every family, there is a black sheep, and that is exactly what happens when people refuse to strive to make something of themselves and choose to depend permanently on others. However, as the Yoruba would say, elders are to be respected irrespective of what they do, but for the purpose of clarification, I would like to state here clearly that Alhaji Abdulateef ‘Kola Abiola is the first son and head of the Bashorun MKO Abiola family, and is the ONLY person with the right to issue a statement on behalf of the family. Mubashiru Abiola is an uncle – my father’s younger brother – the type of uncle who wouldn’t be able to tell his brother’s child apart from a total stranger, the type who only affiliates with those of his brother’s wives who have money to give him, when in fact, he should be the one trying to ensure that his brother’s children are well taken care of. Mubashiru Abiola is the head of HIS immediate family, Brother Kola is the only recognized MKO Abiola family head that I know, and the only person that I, personally, have ever approached for assistance (and contrary to the opinion that many have of him, he did help). Brother Kola was the one who ensured that school fees were paid. There are other elders within the extended family, of course.

They say my father was a Northern apologist; I say that he was a Nigerian as much as he was a global citizen. He had friends from all over the world, and refused to play to ethnic or religious sentiments. If he had chosen to play ethnic politics, he would not have attained the height that he did, and eventually, those who campaigned against him and even sponsored advertorials seeking to incite the South-West against him had to lend their support or risk losing their relevance. That’s the kind of enigma my father was; the type of man that you just could not bear to stand against, the type that melted hearts with his eloquence and conquered hate with his wit and compassion.

My father was a businessman – never have I heard of one who attained success by having a standoff with government officials. Accusing him of aiding corruption is akin to accusing Dangote of being a criminal for trying to protect his investment. The most important thing remains the fact that when he was entrusted with the mandate of his people, he fought these same soldiers to a standstill, and lost his life in the process.

Those who insist that his motives were self-serving have refused to be objective, in my humble opinion. When given the option of freedom with the condition of giving up his mandate, he refused. He refused, not because he did not want to be at home with his wives and children or revive his many businesses, but because he cared too much about those who put their trust in him, those who had lost their lives, and those who were fighting for his sake. My father sacrificed his personal comfort, his fairytale life, because he had too much honour to be selfish. He could have chosen to return home, he could have chosen to go on exile – a man who could travel to any country at all without his passport would have been more than welcome in ANY country of the world.

If my father thought about himself at all, he would have gone to the UK and run his business from there. Everything would have moved on smoothly and he would have amassed an even greater fortune.

I dare those who point accusing fingers at my father to name just one more person – in their opinion – who stole so much, who was so corrupt and greedy, that he chose to give out of guilt. Just one. If being corrupt truly triggered a wave of guilt in people, then why do we still have poor people in Nigeria? If that were the case, most government officials would be shamed into dropping bags of money for the poor on a daily basis.

It is understandable that with the level of poverty in the country, people readily doubt every wealthy person and believe that something impure must have been involved. The fact remains that this is not always true. My father was hardworking, and this is a trait that many of his children have inherited from him.

My father’s deeds are more than enough to speak for him. To begin listing all those I met – even while in Enugu – who had a kind thing to say or a story (of how he helped them) to narrate would make this a thesis. I have been overwhelmed so many times and been helped by total strangers just because of the name that I bear. I owe this to a great man, the type whom my people say are only born once in a thousand years, and today, I celebrate him.

Moshood Kashimawo Olawale Abiola, Happy fathers’ Day. May Allah’s Mercy be upon you, may your good deeds outweigh the bad, may your incarceration and persecution and the malicious falsehood that some have chosen to circulate serve as a source of expiation of sins for you, may the children you’ve left behind do you proud, may those who seem bent on embarrassing the rest of us fail at it, and may Allah reward you with Aljannatul Firdaus. Your death could not have been postponed or hastened by a second, and so we take solace in the fact that you lived to fulfill your destiny, just as Allah ordained it. Your shoes are too big to be walked in, your shadow is like a mountain that provides shade – I may walk for miles and never escape it, but instead of feeling choked, I will draw strength and courage from you. From you, I have learnt that humility is a virtue, that no sacrifice is too big to give for what I believe in, and that I should take responsibility for my actions. If you could achieve the things you did despite your humble background, then I have no excuse to fail. I have learnt to give even when I have little with hopes that someday, someone may treat my child with kindness too. You were a leader even before June 12, and you continue to be a source of inspiration today.

Rest in peace, daddy. I love you.