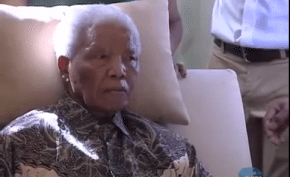 FORMER South African President Nelson Mandela was placed on life support in a Pretoria hospital late on Wednesday, an official who had been briefed of his condition, said.

Considered the founding father of South Africa’s democracy, Mandela, 94, has been hospitalised since June 8 for a recurring lung infection.

In a statement late on Tuesday, the government said Mandela’s doctors “continue to do their best to ensure his recovery, well-being and comfort.”

As the nation remained on edge, police barricaded the street leading to the hospital’s main entrance. Well-wishers hung balloons, stuffed animals and messages of support along the wall outside his Pretoria hospital. Crowds hovering nearby sang, “Where is Mandela?”

“We need you!,” one sign read. “We love you tata, get well soon!” said another, referring to Mandela by the Xhosa word for father. Someone else left a stone upon which was written, “Sending you light and love.”

Many members of the Mandela family came out to collect some of those items on Wednesday.

Mandela became an international figure while enduring 27 years in prison for fighting against apartheid, the country’s system of racial segregation. He was elected the nation’s first black president in 1994, four years after he was freed.

Even as he has faded from the spotlight, he remains popular and is considered a hero of democracy.

As South Africans steeled themselves for the worst, details emerged of the family’s meeting in his boyhood home of Qunu on Tuesday. An archbishop also stopped by the hospital and conducted prayers, calling for “a quiet night and a peaceful, perfect end” for the former president.

Archbishop Thabo Makgoba joined the family at the hospital, where the anti-apartheid icon remained in critical condition, the South African Press Association reported.

“Fill them with your holy courage and the gift of trusting faith, and take away their fears so that they may dare to face their grief,” he said, according to a copy of the prayer posted on the bishop’s website.