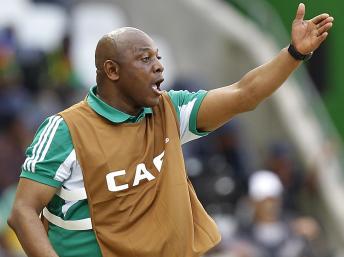 After his Super Eagles crashed out of the 2013 FIFA Confederation Cup in Brazil, Nigeria’s coach, Stephen Keshi has declared that his plan now is to qualify the country for the African Nations Championship, CHAN.

The 2014 edition of the African Nations Championship (CHAN), a tournament for the home-based players playing in leagues across Africa, will be held in South Africa. Nigeria’s Home Eagles will be playing the first round of the qualifiers against Ivory Coast first weekend of July.

Keshi, who is expected to lead the technical crew of the team, said that he is ready to qualify Nigeria for the first time for the African Nations Championships.

“We would go back home take a few days rest after the exit from the Confederations Cup and prepare for our CHAN qualifiers against Ivory Coast in the coming days and hopefully we should be able to make it through,” said the former Nigerian international through the Media Officer of the Super Eagles, Ben Alaiya.

Keshi, who is still smarting the crash of the Super Eagles from the Confederations Cup after they were defeated by Spain in their last group game on Sunday, said that injuries actually undermined the performance of the team at the tournament.

“I can’t imagine that my top striker Emmanuel Emenike will miss some of the goals that we missed and even Ogenyi Onazi was sorely missed. Victor Moses would have ruined any team here and of course several other players that should have been here could not make it due to injuries. Among them United States-based Bright Dike,” he said.

Keshi then declared that he knows exactly what to do while appealing to Nigerians to forgive the team for the less than average performance at the tournament. He promised that the team will do well in the last match of the 2014 World Cup qualifier against Malawi in September.

“We want to come back here next year and make an impact. This is a dress rehearsal and I can assure that the Super Eagles will be among the top nations when the Brazil 2014 World Cup kicks off,” he said.

Keshi also revealed that he has fresh options for the national team when the team resumes for the final World Cup qualifier match against Malawi in September.