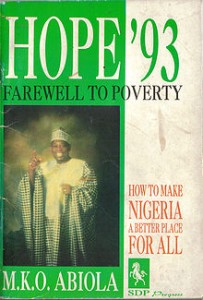 “The only thing that walks back from the tomb with the mourners and refuses to be buried is the character of a man. This is true. What a man is, survives him; it can never be buried.” – J.R Miller

“He who has done his best for his own time has lived for all times.” – Johann von Schiller

As the clock strikes 12 to herald the new day, June 12, 2013, there is the need to re-evaluate today, stroll down memory lane, open our eyes to the deceit that we’ve been sold, and come, with one fell swoop to the conclusion that we are still light years away from a true democracy.

June 12, 1993, there was a huge daylight robbery. Only that this time, the robbery was carried out by the nation’s leaders; those who were supposed to uphold the law. The annulment of the election by General Ibrahim Babangida led to series of protests, arrests and detention. MKO in 1994 declared himself President, and was arrested by General Sanni Abacha, and imprisoned for four years. 20 years and numerous lives later, Nigerians keep calling for June 12 to be declared Democracy Day. Perhaps they are right to do so, but I am of the opinion that calling for June 12 to be declared as Democracy Day is like jumping the gun. We must demand some apologies first. We must ask General Babangida to apologise to Nigerians for stealing our mandate. We must tell him to apologise to Nigerians for allowing his actions to lead to power being hijacked by one of Nigeria’s fiercest dictators ever, General Sanni Abacha. We must ask Professor Kofi Annan and Emeka Anyaoku to apologise to Nigerians for deliberately misleading the world into believing that MKO had renounced his mandate when they visited him in jail. We must ask the group of ‘International Coroners’ that carried out the final autopsy on MKO to release their autopsy report; we deserve the truth after spending 20 years listening to lies. We must ask the court to allow General Sanni Abacha’s Chief Security Officer, Al-Mustapha to release the audio and video evidence he claims are with him to show how MKO was beaten to death. We must ask the American Susan Rice to tell us what her mission to visit MKO on the day of his release was, and how a man who was hale and hearty could suddenly fall sick and die. It would be too huge a joke if we neglect all these and keep on calling for June 12 to be declared Democracy Day.

Besides that, it will be a joke to celebrate Democracy day, to see the very enemies of Democracy, dancing in their agbadas, celebrating a non-existent democracy. It will be a huge joke for June 12 to be celebrated as Democracy day in honour of MKO and yet his legacies have never been kept. Between 1972 and 1998, 26 years, MKO helped in providing 63 secondary schools, 121 mosques and churches, 41 libraries, 21 water projects in 24 states of Nigeria, etc. Yet the same people who want to celebrate Democracy Day on June 12 are the same people who have let his legacy perish, they are the same people who, although in power, have failed to meet a record set about 20 odd years ago by a man not in power.

What could be more ironic than celebrating June 12 without electricity, without potable water, with high child mortality rate, with 70 % of Nigerians below poverty level, with roads that have become death traps, without good hospitals, with insecurity at an all-time high, with abuse of office and mud-slinging in positions of authority, with looting the nation’s treasury with reckless abandon, with freedom of speech now limited to speaking to yourself, with unguarded comments and illegal arrests; what joke could be funnier than celebrating June 12 as democracy day under these conditions.

Before June 12 can be celebrated as Democracy day, Nigerians must see dividends of democracy. The legacies of MKO that has been allowed to cool off must be re-ignited. Governance must be transparent. Leaders must be prepared to be held accountable by the citizens. Freedom of Speech must be free indeed, even when it involves speaking the truth to authority. Providing social amenities must become a top priority for the nation’s leaders. All the inter and intra-party bickering and ‘un-constructive’ war of words must stop. It goes beyond renaming government and non-government agencies and institutions after MKO, celebrating him will mean continuing his legacy and living his dreams of a new Nigeria.