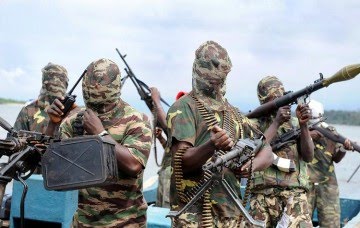 I think of heroes like Ken Saro-Wiwa who were killed unjustly for treading the path of truth, men who were cut down wickedly by those who ruled the very same country his heroes served and fought to defend. I think of the breadwinner who can no longer sustain his family because his farmland is polluted. I think of the young man who cannot find a job, who has to watch his land burn because greedy foreign multinationals care about his oil but not his welfare, and I see no sense in opposing you. I think of those who claim to fight for the Niger-Delta, who claim to care about their people but got paid by government and gave up the struggle, and I respect you; you choose to tread the path of courage despite knowing the immense benefits you could reap if you behaved like them.

With utmost respect and the deepest reverence for you courageous men, I acknowledge that your demands are reasonable, that you have every right to be angry, and that you have every reason to be concerned about the welfare of your people, the reputation and future of your brothers and comrades, and the direction in which this country is heading; however, I do not intend to undermine you, but there are better ways to achieve your stated noble objectives.

I know that a lot of thought must have gone into Hurricane Exodus, but please bear with me and let me explain. Hear me out like you want the government to listen to you. Please consider my proposition, then make up your mind. I write this with the utmost conviction that great revolutionaries such as you surely must have open minds.

We are all Nigerians, and we are all victims of government’s brutality in one way or the other. I am from the South-West, and daily, people lose their lives on our roads, the police abuse our rights, we lose family and friends to armed robbers. Our men have no meaningful jobs and are thus gradually emasculated, our sisters have no viable source of income and the same government officials who oppress us end up making mistresses and prostitutes out of them. Our hospitals have become mortuaries – people die from the tiniest ailments and there seems to be no end in sight. Our schools are in a sorry state – the education that we charge the poor to put their faith in has lost its value. We have no pipe-borne water, no electricity, no social amenities, no good roads, and this is the same thing that’s obtainable in every other part of the country.  The situation in the North is even worse because in addition to all these, the scars from incessant Boko Haram attacks are still evident. I have written this so that you may understand that anything at all that could further endanger the lives of fellow struggling, suffering Nigerians may defeat your purpose in the long run.

You are angry, and we understand, but please, in the name of God and every other thing that you hold dear, in the spirit of humanity, in the spirit of this fight for freedom, spare us – the suffering people – and direct your grievances at those who oppress us all and have done this to your brothers. Many Nigerians are very much aware of the shenanigans and political maneuverings surrounding Henry Okah’s arrest and eventual prison sentence; please do not make us regret being on his side and speaking up against this injustice.

If we directly or indirectly fight each other, we would be doing ourselves by reducing the number of those who can come together and fight against these oppressive elements. As I reiterated earlier, your demands are reasonable – Dieziani Allison Madueke, the Minister for Petroleum, fell from grace with the general public a long time ago. Her alleged acts of misconduct and flagrant disregard for due process rile every conscious Nigerian – you want her out of office and so do we, but do not make us pay in order to achieve that.

Our wants and desires are the same, but how do you prove to the world that your comrades are innocent of the charge of terrorism when the measures which you plan to adopt could very well also be classified as such? How do you rid yourselves of a stereotype which you allege to be unfair when your proposed actions seem to affirm it? Putting anybody at all in harm’s way will not make people sympathetic to your plight – you might not need our sympathy or support, but imagine how much easier it would be for your demands to be met if we all joined you, if we all added our voices to yours? There is power in numbers, and so I humbly plead with you to not alienate the rest of us.

If you have a grudge against government officials, then please face them squarely – that is all I ask. Very few of them care about our plight and their unholy selfishness is the stuff legends are made of; nothing and no one matters to them except themselves and their ill-gotten wealth and properties.

There is no smoke without fire; we have gotten your message and received your warning, and first, I would like to thank you for being kind enough to warn about the danger of being near petrol tankers – however, I have but one question; what happens when one gets blown in traffic, where there is bound to be a high number of civilian casualties? If you blow up these tankers and a driver happens to lose his life, what happens to his family? It is normal that we seek to express our grievances, but we also must be kind and humane enough to think of the effects that our actions may have on others.

I speak for the poor farmer who have to transport his goods, the tired wayfarer who have to travel on our roads, the tanker driver who have a family to feed, the university student heading back to school, the pregnant woman who just lost her husband to Boko Haram…..we have seen what level of havoc a loaded tanker can wreak without explosives attached to it, please let us not witness an even worse level of carnage. Detonating these bombs at odd hours is no guarantee that civilian lives will not be lost either – many times, we are forced to sleep on these death traps we call roads due to flooding and various accidents.

Those whose survival is solely dependent on this sector will also suffer if you go ahead with this plan. Please consider the thousands of families that would cross that thin line between sustenance and poverty.

I beg you, I beseech you, have a rethink. Your statements and your passion to fight for what is just, portray you as men of honour and valour who would not forget their brothers in their time of need; please, extend these admirable traits to the rest of us, and spare the general public the heartache that could arise from your proposed line of action.

With utmost respect and the hope that you would reconsider,