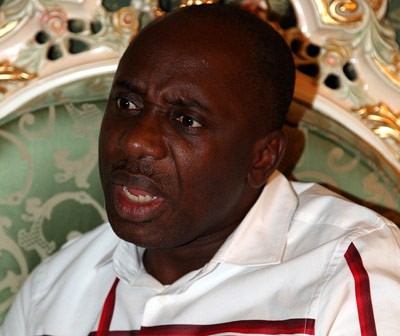 Governor of Rivers State and Chairman of the Nigeria Governors’ Forum, Rotimi Amaechi, is leaving nothing to chance as he consolidates his victory in the forum’s election held on 24 May.

Today, Amaechi who has fixed a meeting of the forum for tomorrow at the Rivers State Governors’ Lodge, Abuja, is set to meet former President Olusegun Obasanjo in Abeokuta in company of the Kano State Governor, Rabiu Kwankwaso.

Though Amaechi is yet to arrive for the meeting with Obasanjo as at the time of filing this report, P.M.NEWS gathered that the meeting earlier fixed for yesterday could not hold because the governor failed to show up.

Sources close to the Rivers State governor disclosed that Amaechi is seeking Obasanjo’s support in his battle with President Goodluck Jonathan who is determined to remove him as the Chairman of the Governors’ Forum.

Governor Amaechi yesterday circulated a notice of meeting of the Governors’ Forum for Wednesday at the Rivers State Governor’s Lodge in Abuja at 8p.m. The meeting which is held monthly usually precedes the National Economic Council, NEC, meeting in Abuja.

But the Presidency also has a dinner on Wednesday in commemoration of his government’s mid term milestone. All the 24 PDP governors are expected at the event.

Some political observers view the dinner as an attempt by the Presidency to prevent the meeting of the governors from taking place, since the dinner may prevent some PDP governors backing Amaechi to avoid the NGF meeting.

Though the disagreement between President Jonathan and Amaechi precedes the Governors’ Forum election, the president tried all he could to prevent Amaechi from being re-elected chairman of the forum but failed as 19 governors voted for him on 24 May.

To remove the support base of Amaechi who is also a member of the party, the Peoples Democratic Party, PDP Governors’ Forum was hurriedly formed by the Presidency. It was led by the Akwa Ibom State Governor and a close ally of President Jonathan, Obong Godswill Akpabio.

Despite the maneuovres by the Presidency to influence the outcome of the election held on 24 May, Amaechi won with 19 governors throwing their weight behind him while 16 governors supported Governor Jonah Jang of Plateau State, Jonathan’s nominee for the chairmanship of the forum.

Thereafter, the party suspended him for alleged anti-party activities.