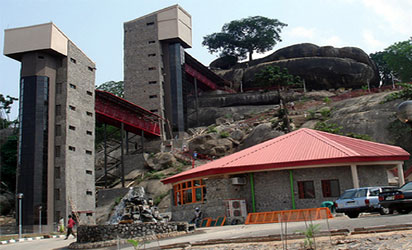 Ogun state is regarded as a leading municipal in the country. This is in recognition of its pioneering role in education, medicine, law, and divinity among others. On the other hand, it is famous for its strategic location as an integral transport route that connects with the rest of the country. It borders Lagos state to the south, Oyo and Osun states to the north, Ondo State to the east and the Republic of Benin to the west.

Created in February 1976 from the former Western State, Ogun is an embodiment of outstanding traditional cultures, which over time has been refined without distortions to make them more alluring. From Remo to Egba, Yewa to Ijebu, captivating marvels that would make a cynical visitor startle thrives.

The state is blessed with Olumo Rock in Abeokuta; it is rated as the most popular travel spot. Legendary tales recalls that it protected the people of Egba against attacks during the frequent wars that characterized the ancient city for centuries. More historic monuments and landmarks include: Birikisu Sugbo Shrine at Oke-Eri; Yemoji Natural Pool at Ijebu-Ode; Oyan Dam in Abeokuta North; Iwopin Boat Regatta and Ebute-Oni in Ogun Waterside. Similarly, Madam Tinubu Shrine in Abeokuta; Oronna Shrine, Ilaro; Area J4 Forest Reserve; Tongeji Island, Ipokia; Old Manse at Ogbe, Abeokuta and Ijamido River Shrine both in Ota.

However, as good as all these sound, it is depressing that most of places highlighted are not as delightful as expected. They groan under trifling attention for reasons best known to the relevant authority.

Take for instance the Golf Course Resort situated at the back of the state secretariat in Oke Imosan, Abeokuta. It remains neglected since its ownership left the hands of ex-proprietor, late Chief Wole Olumide. The renowned architect, one-time chair of the Nigerian Golf Federation and the brain behind the architectural design of the magnificent National Ecumenical Centre in Abuja, lost the property to the present administration, which seized it as a public trust due to allegations that it was built with questionable funds in connivance with former executive head, Gbenga Daniel.

While not challenging government’s authority, I consider it logical that we do away with politics and ensure the Course is put back into use. It is unclear if there is a subsisting order restraining the incumbent from taking care of the facility. Nevertheless, a situation where such a high revenue generator is left to deteriorate is totally unacceptable. I for one cannot fathom the sense in allowing a multi-million splendor waste because of apparent political differences. Tons of money would have been realized if that place was open; it is now 14 months since it was confiscated!

Hopefully by divine intervention, Governor Amosun’s attendants will forward this to him for to peruse. His promise to sustain the state as a leading tourism destination in the country may turn out to be a ruse except proven otherwise. To ascertain the condition of the sites I mentioned earlier, he should personally take a tour and see what is on ground. I can take a bet that he would be embarrassed when he enters some of the places.

His province is blessed with numerous tourist sites, most of which are yet to be developed to modern-day predilection. Undoubtedly, the leisure industry can generate mints of Naira annually and a supplementary approach towards this will do the magic. More local and foreign players in the private sector ought to be invited to fully exploit the sector’s potentials. This would further sell Ogun’s aptitude to the world, raise more funds for capital projects, create employment opportunities, alleviate poverty and empower people at the grassroots.

Besides, the desolate waterfronts around the Gateway State could be upgraded to attractive beaches and arenas of recreation. Areas where such are located include Makun Omi and Akere in Ogun Waterside and Ipokia local government areas. Provision of boats, holiday and sundry facilities et cetera, will transform such places to aboriginal assets.

Government’s financial plan for next year should comprise an improved budgetary allocation for the development of tourism, as it is a key area worth keen interest rather than neglect. I hail from Ado-Odo/Ota, arguably the local government that produces the highest Internally Generated Revenue (IGR), yet no outstanding tourist spot. The ones there aren’t just eye-catching; I visit there at least thrice a year so I am talking about what I know.

Part of the projects the administration hypes in my LGA is the facelift of the Institute of Technology in Igbesa, but it appears hasn’t considered working on the road-stretch in front of the school. Till date the road beside the State High Court is so deplorable that you wonder if what we have is really democratic governance. Years ago, speculations were rife that the street was neglected because residents voted for Amosun against a sitting Daniel in the 2007 poll. Now that power has changed hands no difference; no caterpillar, no coal tar.

Chronicles from other inner parts and minor towns tell that not much has been done to upgrade their respective areas. But when you try to pass such intelligence across, overzealous officials as often as not, argue that your opinion is an absolute nonsense as though they are more astute. Any structure where you have such “I too sabi” individuals accomplish less, still they go on to list expected executions as gigantic successes, so the boss feels he has a superb team in position. For his own good, the governor must be wary of such appointees; the untiring praise singers.

To support my view, a former deputy governor of the state and serving senator of the platform of Action Congress of Nigeria, Adegbenga Kaka in an interview advised the present system to go back to the rural areas. His words: “Having spent so much to develop the urban centre, they should use the remaining two years to go back to the rural areas where the wealth resides, where agriculture and industrial development can be guaranteed. By so doing, they will give the people a sense of belonging and at the same time the source of revenue for the state can be enhanced. A situation where you concentrate development in the urban capital will only give rise to urban slum. By doing this, we are inadvertently increasing urban slums and making the rural areas to be desolate.” We can say the statement is political; we can say it is the voice of a man who wants to call the shots at Oke-Mosan, nonetheless, he is totally correct.

In the 2011 guber polls, the inhabitants of Imo and Nasarawa states resolutely voted out Ikedi Ohakim and Aliyu Doma mainly because of their inattention to rural areas. If you disagree with me go and ask the people, they are alive and well. One of the lessons we got during the last general elections is: no elected public office holder should be so comfortable to think that he (or she) is excessively loved to be dislodged.

In his speech during presentation of the 2013 Budget to the State House of Assembly, the governor said that “More than ever before, we should continue to join hands as we seek to bequeath an enduring legacy to Ogun State and generations yet unborn”. By writing this, I am joining my hands to his to ensure he leaves that legacy he desires. He should henceforth ensure that equal attention is given to all segments.

As a listening leader, I believe Senator Ibikunle Amosun would see to the issues raised with all purposefulness and keeping in mind our native anthem: