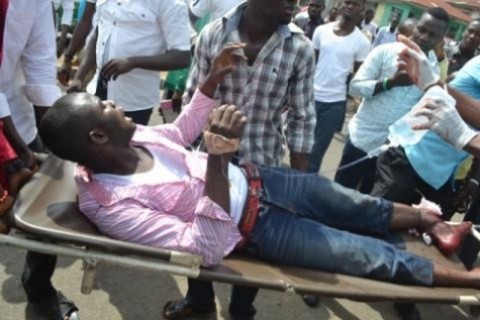 The nation woke up on Tuesday morning to the news that a police officer shot Ahmed Dayo, an (National Diploma) ND 1 Accounting student of the Kwara State Polytechnic, Ilorin. The student reportedly on his way to the campus to collect his identity card, sustained serious injuries after a trigger-happy policeman officer attached to a bullion van misfired in an attempt to shoot the tyre of the taxi Dayo was travelling in.

Of course he must have thought that the car contained men of the underworld who had their eyes on the mints in transit; he was obviously guarding the Naira notes with his job on one hand and his life on the other. Expectedly, the incident shut down activities within the state capital as the victim’s colleagues took to the streets to express their anger. By then, the culprit and the driver of the bullion van had sought refuge at a nearby bank which was lucky not to have been razed.

It is stupid, unfortunate, sickening, demoralizing and questionable that in 2013 A.D., some police officers lack a simple attribute as decorum. In case they have forgotten, some grave blunders they committed in the past earned us international tongue-lashing, with the attendant shame on our collective image as a people.

Already, the madness of one man, who probably is a school drop-out, has left Dayo with a broken bone on his left leg and a crushed tibia which has affected the flat surface of his right foot. Except a miracle and/or urgent medical surgery, one of the affected legs may be amputated.

Kwara state Commissioner of Police, Agboola Glover-Oshodi, says the suspect has been arrested, while his inferior, the command spokesperson, DSP Fabode Olufemi, hours later said he was yet to receive any report on the incident; a statement which confirms prelude to the usual cover ups.

Even though the Nigeria Police often finds itself in such mess, it has never consciously grabbed the bull by the horn. We have said it a million times that any member of its rank and file that uses live bullets on tax payers, especially in unprovoked instances be dismissed after thorough probe. But what do we get: the lunatics get a slap on the wrist and then find their way into the service, thanks to the Baba Isales who are always willing to intercede on their behalf.

We all have our stories. Years ago while in the university, some meters away from the Babcock University junction on the Sagamu-Ijebu-Ode expressway, a policeman flagged our vehicle down. The driver obeyed. The man-in-black then asked to be ‘rogered’, the maximum is N50. The driver retorted that he had no change, but would ‘do normal’ on his return trip. The officer would have none of that insisting he drops ‘something’ or be ready to burn his time and fuel. It is apposite to recall that his action not only disrespected the passengers but other road users queued up behind. He also acted as if he was blind to the weather condition; at that point the sky was fast gathering thick dark clouds. After five to six minutes of arguments, the officer pointing towards left, shouted at our driver to “park, park there”. The furious man sensing that a larger extortion was about to take place drove ahead.

Only seconds later, we heard a big bang and accelerating on a busted tyre, we skid off the road. The driver really struggled, but safely scrambled us to a point. We had been shot at. Once the bus stopped, every one rushed out. While some went straight to prayers, the rest of us – mainly young men – charged towards the checkpoint in protest. As we headed back, the would-be killer and his crew dashed into their black unmarked Ford truck and sped off. Driving against traffic, they escaped via the road leading to Ilishan town just in front of the private university.

There are countless stories of same incident, which do not get reported in the media. Only heaven can correctly provide the number of deaths and permanent disability that people paid to protect the citizens have caused.

I used to think that the Inspector General of Police, Mohammed Abubakar, made it compulsory for banks to convey cash in armored vehicles. Is that order non-existent? Are Police commanders making more money by endangering the lives of junior officers? Is there a case of disloyalty going on?

The IGP should without delay try some senior officers for insubordination, as it appears that some of his directives fall on deaf ears. There is still a deficit of discipline under his leadership and a weak oversight will only do more damage.

What amazes me is that our officers shine superbly outside the shores of the country, while they continue to mess up back home. As it stands, the good health and future of an innocent youth is in jeopardy owing to misjudgment of a simple situation, not warfront! The unprofessionalism of the jittery gun-handler has brought shame to himself, his family and the institution he works for.

Taking another look at the scenario and assuming that he needed to use his weapon, was he too dumb to shoot with precision? Against the backdrop of this latest incident, is the call by Nigerians that regular re-training be carried out not justified?

To Mr. IGP, is this one of the kind of men you deploy to face the ruthless Boko Haram? Let’s stop deceiving ourselves abeg.