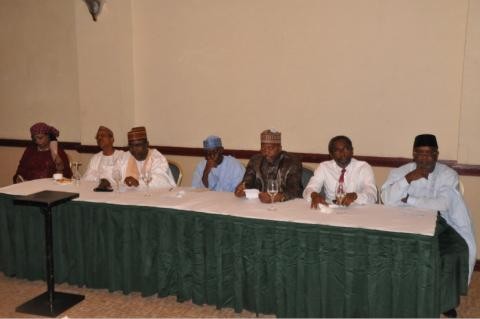 All roads led to the Ladi Kwali Hall at Sheraton Hotels and Towers as youth members of the merging parties which make up the All Progressives Congress held their maiden conversational conference, an intergenerational conversation between party elders and the youths. The event was well attended and had many party elders in attendance, notably Chief Audu Ogbeh, General Buba Marwa, Dr. Aliyu Modibbo, Honourable Femi Gbajabiamila, Dr. Hakeem Baba Ahmed, among other notable individuals. The event was tagged ‘take part to take charge’.

In the opening keynote address, Chief Audu Ogbeh noted that the youths had achieved a truly commendable feat by putting heads together and coming up with such a visionary idea. He acknowledged that the problems being currently faced by Nigerians were indeed left behind by his generation, and that what we all need to strive for as a people is a society where the happiness of the majority – and not force – provides peace and stability. ‘If we do no take care of our problems now, the combined forces of the NATO, China, and Russia, will not be enough to save us’, he said.

He also acknowledged a dearth in thinking capacity of the average Nigerian, saying that if truly we thought ahead like we ought to, we wouldn’t have arrived in 2013 with 3,000 MW of power. ‘Did we not envisage that the population would expand?’

‘From amongst you, we should have the Kennedys and the Obamas who became presidents in their 40’s’, he said while imploring the youths to play more active roles in politics. He further stated that the party would do everything within its powers to ensure that candidates are no longer imposed on the populace, and that youths would be included at every decision-making process within the party. He ended the speech by saying; ‘we must all work together to ensure that accidents no longer happen on the throne of governance.’

When quizzed by Barrister Ismail Ahmed – the interim chairman of the All Progressives Youth Forum – on how the APC would do things differently, he responded by saying that there would be annual meetings – not only for questioning – but for account rendering to the general public. ‘We intend to allow the system to work better than it has before…spending 80% of the budget on recurrent expenditure must also be changed. We want to cut down on the importation of unnecessary items because if we continue servicing other economies to the detriment of ours, we will have no future’, he added.

On the state of the merger, he informed those present that the CPC and ANPP were yet to hold conventions, and that everything would be finalized and formalized once this is done.

In his speech, Dr. Usman Mohammed of the University of Abuja, said that young people are highly important in the movement for radical political transformation of any nation.