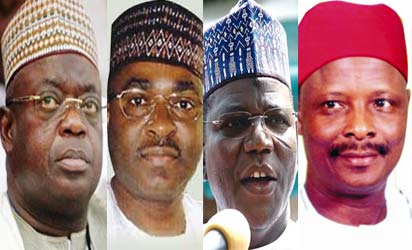 ABUJA — Northern leaders, yesterday, frowned at what they described as a desperate attempt by President Goodluck Jonathan and his administration to blame the rising wave of insecurity in the north on the leaders.

The leaders vowed to resist any attempt by the Presidency to use the Boko Haram onslaught to blackmail them instead of taking proactive measures to nib the insurgence in the bud.

The grouse of the northern leaders was that whereas the President had earlier claimed that he could not offer amnesty to Boko Haram members as they were ghosts, he went ahead to call on Northern elders to enjoin  Boko Haram to stop bombings in the country.

A member of the Northern Elders Forum, Dr. Junaid Mohammed and National President of the Arewa Consultative Forum, Alhaji Yerima Shettima, who spoke separately to Vanguard described the action of the government as a deliberate attempt to blackmail and provoke the north.

It will be recalled that during a visit to Borno State last month, Jonathan had rejected calls for amnesty to Boko Haram members, saying that he could not be dealing with those he described as ‘’ghosts”.

Last week, the Senior Special Assistant to the President on Public Affairs, Doyin Okupe, issued a statement, calling on the Northern elders to prevail on the sect to down tools and accept dialogue as the Niger Delta militants did before the late Yar ‘Ádua offered them pardon.